“…as I was beginning to say about Cori Bush since she’s a defund reimagining, how about you do this? Put a social worker on your detail, just do that,” former Detroit police chief and Michigan gubernatorial candidate James Craig told Fox News. 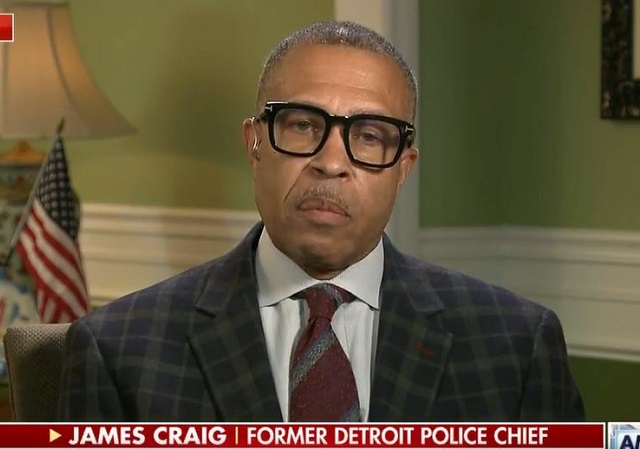 During the interview with anchor John Roberts, Craig said he understood the importance of public officials like Bush having security.

“It’s comedy,” he said of Bush’s double standards. “It’s hypocrisy and I’ve got to tell you, do I believe that security is important for public officials? Yes. I ran a security detail for the mayor and the police chief and the city attorney out in Los Angeles when I was out there at one point. I understand the necessity.”

Though security details need to protect public figures, Craig speculated that when Los Angeles bowed to the Defund the Police movement by voting to strip millions from the police budget that they didn’t pull any funding from the mayor’s security detail.

“But, L.A. just stripped 15 million from their budget,” he noted. “They defunded LAPD, I bet you they didn’t reduce the size of the mayor’s security team in Los Angeles.”

As to Bush and other hypocritical Democrats who want to “reimagine” policing even though they enjoy private security teams who are armed to the teeth, Craig had this advice:

“…as I was beginning to say about Cori Bush since she’s a defund reimagining, how about you do this? Put a social worker on your detail, just do that. These are the same progressives that would also take guns from law-abiding Americans.”

Craig, who has 44 years of experience working in law enforcement, also argued against the type of gun “buyback” programs proposed during the 2019 Democratic presidential primaries by failed Senate and presidential candidate Beto O’Rourke, noting as other police chiefs have how the combination of taking money away from law enforcement and disarming law-abiding folks was a bad idea for the very communities these same Democrats purport to want to help:

Violent criminals are still going to get the gun. We are going to defund the police and hurt vulnerable communities and then take guns away from law-abiding citizens. That’s a recipe for failure.

Craig’s interview happened around the same time a new poll showed Detroit residents overwhelmingly support a strong police presence in their communities, which is bad news for other Squad members like Rashida Tlaib, whose Congressional district includes parts of the city:

Amid a jump in violent crime in this and other cities nationwide, Detroit residents report being much more worried about public safety than about police misconduct, a new USA TODAY/Suffolk University/Detroit Free Press Poll finds.

By an overwhelming 9-1, they would feel safer with more cops on the street, not fewer. Though one-third complain that Detroit police use force when it isn’t necessary – and Black men report high rates of racial profiling – those surveyed reject by 3-1 the slogan of some progressives to “defund the police.”

In Detroit, 1 in 5 residents (19%) cited public safety as the biggest issue facing the city, second only to education, named by 23%. On a list of eight concerns, police reform ranked last, at 4%.

“I’ve got to tell you, I am running,” Craig said. “When I look at what some politicians are doing across our country, you know, let’s talk about Governor Whitmer, she follows different rules. She just does.”

Along with his announcement, Craig’s campaign released a powerful video talking about his leadership as the city’s police chief (he retired effective June 1st), stating that as other Democrat-run cities “burned” last summer, Detroit didn’t:

For people eager to see Whitmer be handed her walking papers after the disastrous (and authoritarian) way she handled the pandemic, it sounds like Craig will be one to watch in the coming months.

If he can defeat Whitmer it would send a powerful message to the country in so many ways.

Another one walked off the Plant Nation, good for him.

James Craig is the real deal. He is the primary reason Detroit didn’t descend into lawlessness like Minneapolis, St. Louis and Chicago last summer.

He will be a great governor.

The vile Dhimmi-crat apparatchiks — like the communist apparatchiks of old — always take steps to exempt themselves from the predictably deleterious consequences of their ill-conceived policy schemes. So, “security for me, but, not for thee,” is totally consistent with this ethos.

He bears a resemblance to Colonel West. It must be the security character. Let’s get together and stand for some, select… all lives.

Anybody can say anything. I’ll reserve judgement until I see what he actually does after he’s sworn in, assuming he wins.

IIRC he is the only one who would lose to wHitler the last time I saw a poll.
I’d like to see all this crap about public officials needing security on the taxpayer dime go away except for the line of succession from the Presidency down. It isn’t like some nitwit mayor or governor has their finger on the button.
Let them either use their 2nd amendment rights, hire security with their own money or go unarmed. So many of them want us disarmed I say let them go first.