Breyer gave a simple answer: NO. 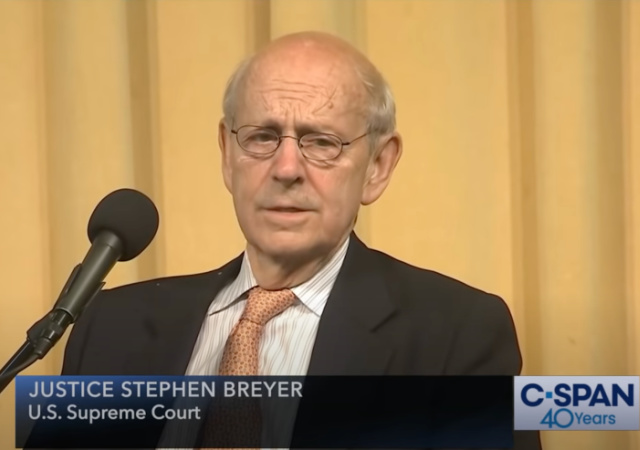 Supreme Court Justice Stephen Breyer has no plans to retire. He spoke to CNN:

Far from Washington and the pressures of the recently completed session and chatter over his possible retirement, Breyer, a 27-year veteran of the high court, said Wednesday that two factors will be overriding in his decision.

“Primarily, of course, health,” said Breyer, who will turn 83 in August. “Second, the court.”

Justice Stephen Breyer has not decided when he will retire and is especially gratified with his new role as the senior liberal on the bench, he told @JoanBiskupic in an exclusive interview.https://t.co/IpZTDN6w0Y pic.twitter.com/XXDG3f7qbv

The left has pushed him to retire so President Joe Biden can instill his own justice to counter those picked by former President Donald Trump.

But Breyer enjoys his new position as ranking justice of the liberal side of SCOTUS:

When asked directly over coffee in rural New Hampshire whether he had decided when to step down, Breyer said simply, “No.”

He brushed aside questions about the timing of a decision but was willing to speak about the factors that would influence him, including regard for the court. He also elaborated on the satisfaction his leadership role on the left wing has brought.

Breyer said his new seniority in the justices’ private discussion over cases “has made a difference to me. … It is not a fight. It is not sarcasm. It is deliberation.”

The left wants Breyer to retire so he can nominate a younger justice. I have a feeling they do not like his approach, even though SCOTUS should not have a political agenda.

Breyer sort of takes that approach:

When the justices meet in private to decide how to vote on cases, the nine are alone. They call these collective sessions, the “conference.” And according to longstanding tradition, Chief Justice John Roberts speaks first, giving his thoughts about a case and casting his vote. Next comes Justice Clarence Thomas, on the court for 30 years. Breyer is now next in the order, and the first liberal to have a shot at influencing a case and any cross-ideological consensus.

“You have to figure out what you’re going to say in conference to a greater extent, to get it across simply,” Breyer said. “You have to be flexible, hear other people, and be prepared to modify your views. But that doesn’t mean (going in with) a blank mind.”

Breyer has tried to minimize the politics of a 6-3 conservative-liberal bench in these especially polarized times. A lengthy speech he gave at Harvard Law School last April has been turned into a book that will be published in September titled, “The Authority of the Court and the Peril of Politics.”

Leftists are losing their minds.

Stephen Breyer is why we need term limits for the Supreme Court. They all think too highly of themselves and too little about the country. https://t.co/6qEjXmjQv0

Breyer’s case shows how broken the system is. He needs to move on for the good of the country and the court. The right system would grant each president at least one pick and would not have the balance of the highest court determined by the vagaries of health or personal vanity. https://t.co/KLIDYsQ3ob

if nothing else, there should be term limits on the supreme court, if not the entire federal judiciary. even by the loose standards of U.S democracy, untenable to have people with this much power serve this long without any check from the public https://t.co/SWspkDIWVX

Power. Justice Breyer has it. Other d/progressive want him to relinquish it.

Someone should release a parody of Pink Floyd’s “Money” called “Power.”
It could be the liberal Justices’ theme song.

Whatever, I’ve given up on SCOTUS being a solution to anything. However, people like Breyer and Ginsburg imagine/imagined only they can save us from ourselves. Therefore only death will remove them.

Hubris is strong with the leftists on the SCOTUS.

B boy’s tweet in the story clearly reflects the ignorance he has. There is a check on scotus members with the public. They can be impeached. Replacement members are nominated by an elected president and confirmed by elected senators.
Checks and balance 101.

“In denying the right they usurp of exclusively explaining the constitution, I go further than you do, if I understand rightly your quotation from the Federalist, of an opinion that “the judiciary is the last resort in relation to the other departments of the government, but not in relation to the rights of the parties to the compact under which the judiciary is derived.” If this opinion be sound, then indeed is our constitution a complete felo de se. For intending to establish three departments, co-ordinate and independent, that they might check and balance one another, it has given, according to this opinion, to one of them alone, the right to prescribe rules for the government of the others, and to that one too, which is unelected by, and independent of the nation. For experience has already shown that the impeachment it has provided is not even a scarecrow; that such opinions as the one you combat, sent cautiously out, as you observe also, by detachment, not belonging to the case often, but sought for out of it, as if to rally the public opinion beforehand to their views, and to indicate the line they are to walk in, have been so quietly passed over as never to have excited animadversion, even in a speech of any one of the body entrusted with impeachment. The constitution, on this hypothesis, is a mere thing of wax in the hands of the judiciary, which they may twist, and shape into any form they please. It should be remembered, as an axiom of eternal truth in politics, that whatever power in any government is independent, is absolute also; in theory only, at first, while the spirit of the people is up, but in practice, as fast as that relaxes. Independence can be trusted nowhere but with the people in mass.”
–THOMAS JEFFERSON

I hope that the mob alienates him, and that he hangs on until Trump is reelected, just to spite them.

Perhaps he will hang on until another GOP is in the oval office… and then we can have another Roberts on the SCOTUS.

As always, the mechanisms of government do not allow voters a choice of preserving their rights or surrendering them; only a choice between whether they will lose their rights gradually or at ludicrous speed.

Byron White left the Court in his late seventies, at the top of his game. White stayed on the bench as a semi-retired judge sitting on the lower courts of appeal and died at age 85, with his passing of note in the legal world only to his colleagues and his law clerks. Few are the long-serving office holders, in politics or the bench, who willingly step away from the limelight to put the needs of the institution they serve and the people who come before it ahead of their own egos. For every Byron White or Karen Williams, there are a legion of Ruth Bader Ginsburgs and John McCains who cling to office long after they are no longer physically fit to serve. I wish Justice Breyer good health and hope his realization of when it is time to go will not be so late as to be disruptive to the Court.

I’d add Joe Biden to your list of “public servants” who are unable to execute the responsibilities of their office.

In the unlikely event that the Supreme Court becomes an impediment to the desires of the regime, I assume that they have the script that they used on Scalia updated and ready.

Ugh, not this again. There is no reason whatsoever to suspect foul play. He died. People do that. His pillow was over his head, which is a completely normal position for a pillow to be; all reports that it was “on his face” were made up by stupid blogs and rumor-mongers, and have no basis in any real news report.

Despite the over-the-top mourning for Ginsburg, there are plenty of liberals and, dare I say it, people in the media who don’t want a repeat of what she did in refusing to leave when there was a good opportunity to replace her.

That being said, if Biden gets a chance to nominate someone to SCOTUS, I’d bet good money that person will be somewhere between 45-50 years of age.

Or, 13, with the most compelling bubble-gum scented shampoo.

And, no matter how bad, GOPpers will be lined up 12 deep to vote Aye/

This is all more than a little ghoulish.

SCOTUS should be elected by the people. Or disbanded. Lower court judges are just as bad…liberalism has taken over most of our judiciary. . Dems like aoc want him to retire from a lifetime appointment but no one demanded RBG retire when she was too ill to perform her duties for years, (SORRY SHE SUFFERED so long, but she should have resigned and lived her illness at home with her family)

In 2006, Roger Cramton, the former Dean of Cornell Law School and former head of the DOJ Office of Legal Counsel, wrote a book on this subject and recommended term limits, giving vacancies to fill during each 4-year Presidential Term. https://news.cornell.edu/stories/2006/04/new-book-addresses-term-limits-supreme-court-justices

Here is Cramton’s argument that term limits would be Constitutional: https://scholarship.law.cornell.edu/cgi/viewcontent.cgi?article=2216&context=facpub

Term limits on the supreme court would mean that the Democrats have much more of a chance to appoint new justices who we have all seen march in lockstep.