Those who work for Biden have to be laughing behind his back. Otherwise, they would not allow him out of the White House. 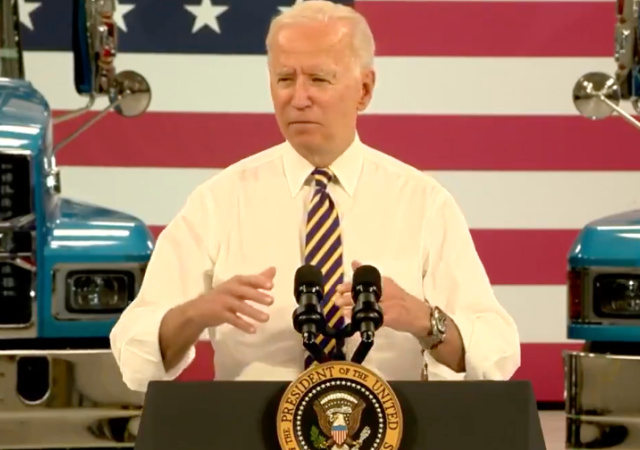 President Jow Biden is not well. I have a feeling those who work for him are laughing at him behind his back. Otherwise, they would not allow him to leave the White House.

Ready for some weird Biden moments? Here we go.

BIDEN: “Back in 2009, during the so-called great recession, the president asked me to be in charge of managing that piece, then President Trump. Excuse me, Freudian slip. That was the last president. He caused — anyway, that was President Obama, when I was vice president.”

Biden says he was VP for “President Trump,” tries correcting himself, starts to blame Trump for “causing” the housing bubble, then corrects himself again pic.twitter.com/fdzKRF7bOj

For some reason Biden claims he used to drive an 18-wheeler pic.twitter.com/HN4BpIhXrB

The only 18-wheeler that Dementia Joe needs to know is the one his first wife used to commit suicide to get away from his pedophile azz. The driver he slandered for decades claiming he drank his lunch. Go to hell, pedophile.

I just made LI history: I aimed for a downtick but gave the comment an uptick in error.

My apologies to the others here. The comment itself is nasty and vile.

Claiming that his then wife deliberately drove into the path of the truck is about as nasty as Quid Pro Joe has been his entire career in the Congress. But the remainder is true (the drunk driver lie he told for years now) or (using Socialist/Communist standards) mostly true (paedophile).

Lest we forget this vile piece of human garbage was the reason for the origination of the verb “borking” for his treatment of Judge Robert Bork in his appearance before Biden’s Senate Committee on the Judiciary. Clarence Thomas took note of Judge Bork’s treatment at Biden’s hand with his reference to “high tech lynching”.

That was indeed our China Joe. Do not concern yourselves with ‘nasty or vile’ or anything else mannerly. That is fighting “conservatively” against an enemy that means to have rid of us one way or another. We are not in a partisan war anymore. We are in an ideological war and we are losing.

Joe’s has “TONKA” in big letters on the front.

Along with Neilia, a one year old child lost her life.. Her name was Naomi. It was not suicide.

Are you implying our friend mark is Biden?

What’s wrong with 59k miles a year in the UK?

Exact and full quote from Biden:

“I used to drive an 18-wheeler. I liked honking its horn when children drove by. I’d see the kids and jerk the handle hard. And I used to ride around with a black fury chimp. I liked to rub the hair on his legs while he rubbed the hair on mine. I went everywhere with that Chimp as I drove that big-rig across the fruited plain. Sometimes, as I was driving, I’d see a Russian, and pull over, and tell him what’s what! Man, I sure put fear in those guys! After a while, after they saw me and my chimp coming down the road in my Peter-Built, well, they’d ago running.

Me and my chimp would go to road-side diners and truck stops, and he’d sit in my lap and pick bugs out of my hair. Then we would poop in each other’s hands and throw it at people. I was down with that chimp, and he was down with me.

But then he got drafted, and went to Vietnam. And that got me to protesting the war with a bunch of black people who prayed in the church where I grew up raised by Martin Luther what’s his name. And I got a bunch of other people to join me in protesting, too. These were real cool dudes who wore white robes with pointy hats. We’d march around all day, and at night we would set fire to big crosses we put in black people’s lawns to give them religion.

But then, I became a commando, and put on some black clothes and black face paint and went over to Vietnam with a pump shotgun to rescue my chimp who had been captured by the Vietcong and were forcing him to play Russian roulette. So I went to rescue him in my 18-wheeler which I crashed through the gates of the Vietcong prison to rescue my chimp. And that’s how I met John McCain. And me and my chimp and John drove out of that Vietcong prison. The Chimp drove while John fed me ammunition to my machine gun while blew all the Vietcong to bits. And then we drove my rig all the way back to America where Roosevelt gave me the Medal of Honor, and he made me his Vice President, and then I went over and killed Hitler and Tojo.

I don’t believe he is capable of retaining even a limited train of thought for a full sentence, much less most of a paragraph (e.g. most of the final paragraph refers to “commando” and RVN).

I’d not want a fury chimp. They have very short tempers.

Jen presses a red Biden button, President Biden bipedals to the podium, faces the tv cameras, and clubs himself in the head three times with a lug wrench in an effort to render himself conscious enough to speak proper English rhetoric.

Did you just say Ni to that old man?

east germany…where they tried to do communism correctly LOL

I also think they’re sending him on trips as a bit of a Chief Morale Officer, which isn’t working either.

They’re screwed no matter what they do. Biden is a walking disaster. Hide him away and that looks bad, too. Pull the ol’ 25th amendment, but “Cackles” will be just as big of a disaster. What to do? Oh, Delta variant! We better lock everything down again. They’re already sowing the seeds for that.

Aside from the truck driving gig, I understand that Biden’s butt has recently been wiped, and that he’s asking “Where’s Mom?” Biden is a couple of sandwiches shy of a picnic lunch.

He always has been a walking talking moron,even before his bout with senility or dementia. Just goes to prove,yes you can be braindead and be installed as president.

I will have no truck with those making sport of our president. He said he drove an 18-wheeler-man. He was obviously referring to giving a lift to Teamster trucking union boss, James Hoffa, to his last meeting.

There is vibrant Hunter watercolor painting that depicts the event hanging in the Oval Office.

Didn’t Hunter do the painting of Obama in the big chair with the jungle leaf overgrowth?

I can just imagine Joe, meeting his first lot lizard, and calling her DOKTOR.

Was that before or after he commanded a nuclear submarine?

Maybe he did drive one, you know after he got off his lifeguard shift at the pool and fought corn pop daily and let the kids play with his leg hair.

Speaking of hair this whole covid thing is putting a crimp in his hair sniffing fetish. Maybe that’s why he wants everyone vaccinated, so teen girls can’t use social distancing as an excuse to keep him at bay?

Fauci has been saying that the Delta Variant will require people to wear both a mask AND horse blinders.
Then the girls won’t see Joe coming.

Trump the father and Obama the black sheep brother.

Does Biden even know he is Biden anymore?

At this point in his descent into late stage dementia, Pedophile Joe should be in the comfort of his own home, molesting his grand children.

Blaming his alzheimers on Sigmund Freud is quite a stretch.

Not a matter of “IF” but “How Much Longer”
Dementia is a slippery slope,..no two people travel it in the same way or on the same time line. The fact is, Joe Biden has Dementia and for those who have cared for and/or walked the walk with someone having this affliction can readily confirm…. Biden is on this much traveled path. We, the populace of our Republic, are being subjected by the collusion of the Democrat political elitists who have self-anointed themselves to use our Constitutional system and perpetrating a most immoral agenda of a hoax on “We The People”.

Biden and the Democrats are forever claiming to “Have History on Their Side”.
In this case they may be right! For there has neve been such a damnable offense been enacted by a knowing electorate. And for that it will always have a place in history of our nation as the first and hopefully the last.

I bet Joe can’t remember where he parked his 18 wheeler.

I’ll bet that Joe no longer remembers that he even drove one.

Joe has such a rich fantasy life. What really happened is that Jill bought him a “Rubber Ducky” for bathtime.

Jill has a rich fantasy life too. She imagines her husband is president.

It’s in the oval office parked next to his high chair. It is a great big battery operated, joy stick guided, secret service approved contraption with 4 drive wheels and 14 training wheels.

Joe doesn’t know where he parked his 18-wheeler, but I do. You’ll find it at the truck stop where Kamala Harris was working until Joe showed up and offered her the job of being his running mate (or maybe he offered to be her running mate).

Wasn’t that just a few years before he made the moon landing?

Mars. Where he planted that flag, as a personal favor to Sheila Jackson Lee.