“accused of entering restricted grounds around the Capitol, possessing a firearm while there and lying to investigators” 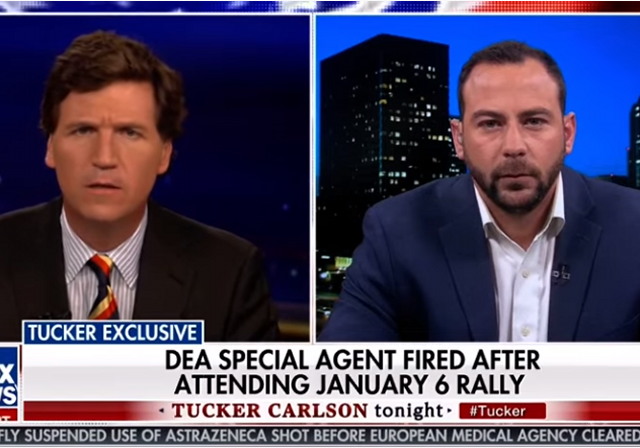 Mark Ibrahim lost his job as a DEA agent for attending the January 6th protest. He did not participate in the riot.

In addition to being fired, he faces charges for a number of supposed crimes.

John Kruzel reported at The Hill:

A special agent with the Drug Enforcement Administration (DEA) was arrested Tuesday on felony charges related to his alleged participation in the Jan. 6 riot at the Capitol.

Mark Ibrahim of Orange County, Calif., is accused of entering restricted grounds around the Capitol, possessing a firearm while there and lying to investigators, in what are believed to be the first charges filed against a federal law enforcement official involved in the pro-Trump attack.

Court records unsealed Tuesday contain photographs in which Ibrahim can be seen displaying his DEA badge and government-issued firearm, posing on a statue and walking along restricted grounds shortly after the barricades were breached. He has not been accused of entering the Capitol.

Ibrahim is alleged to have sent photographs and videos of himself on the Capitol grounds to a WhatsApp group chat with at least five other law enforcement officers, according to court records.

A Justice Department official said in a court filing that Ibrahim crafted a phony narrative in which he falsely claimed that his participation in the Jan. 6 event was part of an effort to assist the FBI. A friend who accompanied Ibrahim that day told the official that Ibrahim concocted the story to “cover his ass.”

Darren Richie, an attorney for Ibrahim, said his client “at all times remained peaceful and docile” and “played no role in any riot.”

Ibrahim appeared on the Tucker Carlson show last night with his lawyer to discuss the charges. In his introduction, Tucker emphasized that Ibrahim had his weapon with him because he was a federal agent in good standing, and that people in such a position are encouraged to carry their weapons. Watch:

Tucker Interviews A Former DEA Agent Who Says He Was Invited By A FBI Informant To Go The Capitol That Day & Was Encouraged By This Man To Go Into The Capitol pic.twitter.com/iRsY2VTz79

This man did not participate in the riot and his prosecution looks political and vindictive. Democrats are purging the military and law enforcement agencies of people they suspect of being Trump supporters. It’s un-American.

Ibrahim is facing 15 years in prison, despite the fact that he did not participate in the riot or enter the Capitol. Does anyone believe that a DEA agent who participated in one of the Antifa/BLM riots would face similar charges?

“facing 15 years’ by no means actually means he’s facing 15 years. From what little I understand, he was a probationary agent (unsure) and he really would not have been in any real trouble except for the double-dumb of sending messages to other LEOs with pictures, then LYING about it when asked officially. (I.e. carrying his weapon and badge while off-duty is actually normal, because where can you put them while walking around? The hotel room safe? That’s not safe at all.)

In all odds, they’ll get him to sign a “I’m sorry, I shouldn’t have done that” letter that absolves the agency of any responsibility, and he’ll get bounced to the curb *unless* he compounds stupidity by making a stink about it. Federal agencies hate stink.

That may be what should happen, but don’t fool yourself. He is facing 15 years. If all they want is to kick him to the curb, If he is a probationary agent, that could be done easily and quickly, and apparently has. So why continue a prosecution unless they mean to prosecute?

The part where he lied, if true, means that he won’t get the deal you’re suggesting. Federal prosecutors hate, hate, hate when little people lie to them. Big shots can lie, but little people, not a chance.

“lied to the FBI” I believe him over the FBI.

There needs to be lots more stink.

This is your reminder that the FBI agent that dropped his gun ‘dancing’, resulting in SOMEBODY GETTING SHOT, was sentenced to 2 years PROBATION with zero jail time.

He obviously wasn’t considered a conservative.

I think the main factor: he was a Federal LEO and so has immunity from meaningful punishment.

True crime…not being a Party member and sacrilege of the Temple of Democracy. I suggest that the Capitol police who ushered in 1/6 Trump supporters had more criminal intent.

It has been my experience in life that Prisons are filled with people who are REALLY guilty or who are Innocent.

This is why the RINOs lose, and why people are sick of their crap.

Because when they are theoretically ‘in control’, they can’t bring themselves to punish pieces of crap that commit ACTUAL CRIMES like unambiguously lying to FISA courts.

And when the Democrats are in control, they start purging anybody that they think MIGHT be a Republican.

RINOs aren’t there to win. They are there to give a gun-owning population the illusion of representation.

Portland and Seattle rioters… not so much.

Mark should read Gulag Archipelago to get a heads up what to expect.

My impression is this guy isn’t the brightest bulb. Why as a federal LEO, especially one on probationary status, did he think this was a good idea?

Yes he is a citizen yada, yada he has rights yada yada. Granted. My question is why did he think it was a good idea?

IMO he is learning more every day as to why it wasn’t a good idea for him to attend. Not that he necessarily deserves the lesson, but he is definitely getting it.