“What we’re seeing since February of this year is absolutely unprecedented, the numbers we haven’t seen in 20 years, certainly not since the creation of this department” 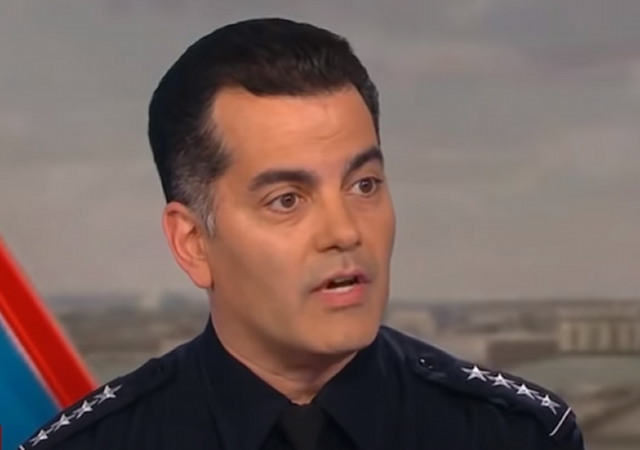 In the weeks since Kamala Harris finally (sort of) visited the border, the issue has fallen off the media’s radar, for the most part. Unfortunately, the situation has not improved.

If anything, it has gotten worse.

Former Customs and Border Protection (CBP) Deputy Commissioner Robert Perez, in his first interview since leaving office at the end of June, tells Fox News the border crisis is unlike anything he has ever seen in his career, and he urged Congress to fix the country’s “broken” and “porous” immigration system.

“What we’re seeing since February of this year is absolutely unprecedented, the numbers we haven’t seen in 20 years, certainly not since the creation of this department or Customs and Border Protection, my former agency,” Perez said in a phone interview Thursday.

There were more than 180,000 migrant encounters in May alone, and while the numbers have been rising since April last year, they have hit new highs this year. The increase has also coincided with a spike in fentanyl and migrants with criminal convictions.

“It’s a crisis unlike anything I’ve ever seen and it’s a serious one…because first border security is national security. Unfortunately, It gets oversimplified by too many too often,” Perez said.

It’s worth noting that the Biden administration allegedly pushed Perez out of his position. Is there any wonder why?

Anna Giaritelli reported at the Washington Examiner in May:

The Biden administration is pushing out the most senior career official at the country’s largest law enforcement agency, U.S. Customs and Border Protection, according to two people with firsthand knowledge.

Political appointees at the Department of Homeland Security chose not to keep CBP Deputy Commissioner Robert Perez on as the second in command of the federal agency. Perez was promoted to his position at CBP headquarters in Washington in July 2018 and oversaw operations of trade, travel, immigration, and national security at land, air, and sea borders.

Biden officials attempted to demote Perez, a 29-year federal law enforcement officer, by transferring him to an office in Tucson, Arizona. Perez now plans to retire, the people said.

The news from Perez comes as Rep. Rashida Tlaib (D-MI) is now calling for the defunding of ICE, CPB, and the DHS.

Democrat Congresswoman Rashida Tlaib says that “we must eliminate funding for CBP, ICE and their parent organization DHS” pic.twitter.com/aaLHQX0quH

The non-actions of the Biden administration speak volumes. They don’t want to fix this problem and judging by Rashida Tlaib’s position. Some Democrats want to make it worse.

What else must congress do? It is already against the law to enter the country illegally. If congress does their magical “Comprehensive Immigration Reform” as they’ve been promising, it will get even worse.

Perhaps permission or authority could be given to some ICE agents to make a summary judgement as to whether or not someone was truly a refugee and merited entry without a visa etc. What I mean is that if someone comes to the boarder and wants refugee status, demand convincing proof. If not, back they go. It should not take a judge to determine this.

Also, build the wall, put the Trump-era protections back in place, and send illegals back where they came. Including “Dreamers”. As for anchor babies, if their parents aren’t here legally, they can either leave their baby here or take the baby with them when they leave. Even if we consider the baby a citizen, unless they can decide to come here themselves and make the trip by their own decision, they stay with their parents. They can demand entry due to citizenship when they’re an adult but not before.

Those who want to make money on all of this should be ashamed of themselves, alas they are not.

— Comrade Biden’s admin, the entire Democrat party, and their running dog corporate media lackeys, hacks, and propagandists (AKA The Enemy of the People). Not to mention NeverTrump and large segments of the GOPe.

Because, of course, it’s not a ‘crisis’ to them. It’s exactly what they want. Things are going according to plan. If only they could find a way to silence the ‘extremist’ media’s insistence on putting a spotlight on it.

IT MUST BE TRUE IF THEY CALL IT A RIGHT WING TALKING POINT
There is a pattern here.

1. Progressives/ Media … Covid did not come from Chinese Lab >> Anyone saying otherwise is pushing A RIGHT WING TALKING POINT.

FUNNY HOW THOSE RIGHT WING TALKING POINTS SEEM TO TUR INTO FACTS.

When they want to gaslight their BASE – they call it a “right wing talking point” The BASE of brainwashed ZOMBIES are trained to ignore anything that is tagged with that phrase.

I know – I used to be semi-brainwashed too. Finally I started watching the things they told me not to. It opened my eyes. I focused on facts and reasoning – just common sense. And I realized they lied. Both parties lie – but you can really get away with lying much more when you have most of the media on your side – pushing the preferred narrative.

More grist for the mill. The d/progressive policies are clearly failing. Spin from flacks and media allies can only do so much to reduce the damage.

Midterm blowout coming, IMO. The d/progressive know this. That explains their frenzy to pass wildly unpopular legislation. Power is the only thing they care about.

Their surrogates and the useful idiots being deployed to comment/troll on sites such as this are growing more ludicrous by the day. Fear is a powerful motive.

No midterm blowout if the “elections” remain corrupt. They have no plans to allow honest elections.

‘They’ can only engage in corrupt election practices where ordinary citizens passively allow it. I would suggest that you don’t allow it.

This article contains a clue as to why we’re in the situation we’re in.

“Political appointees at the Department of Homeland Security chose not to keep CBP Deputy Commissioner Robert Perez on as the second in command of the federal agency.”

You can fire political appointees at will. The Biden* administration did that.

“Biden officials attempted to demote Perez, a 29-year federal law enforcement officer, by transferring him to an office in Tucson, Arizona.”

I think Perez would be categorized as a “civil servant”. You cannot fire civil servants at will, but you can transfer them in such a way that they will not be able to effectively oppose you.

The democrats do not hesitate to do both of the above. The Obama administration also moved political appointees into civil servant positions so that they could not be fired.

The Trump administration failed to do enough of any of the above. To be fair, Trump had trouble finding non-corrupt job candidates who would be willing to subject themselves to slander and abuse.