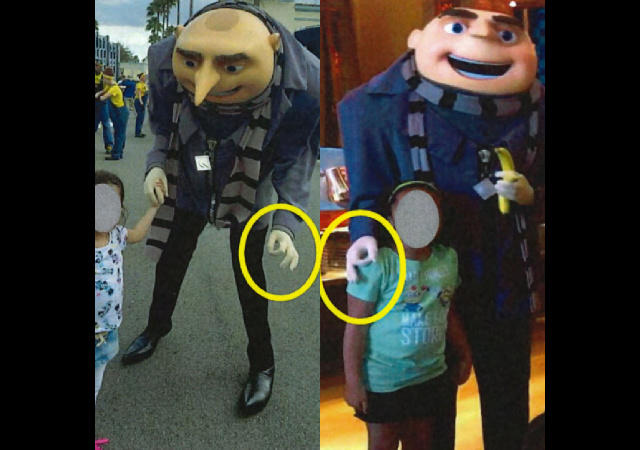 This is not The Onion or The Babylon Bee.

Two families have sued Universal Orlando because a man dressed up as Gru from Despicable Me supposedly flashed a white power sign in photos with biracial children…in February and March 2019.

The plaintiffs are Tiffiney and Richard Zingler along with Geisy Moreno and Joel Rodriguez:

The subject Complaint regards a Universal Studios employee dressed as an animated character who targeted a black autistic child and a Spanish speaking Hispanic child based on their race, color and national origin. The two young vulnerable children gleefully and innocently ran up to meet the disguised man during family trips to Universal Orlando-sponsored events. In display of open hatred towards the girls, the costumed man made a White-Power hand symbol while posing for family photographs and videos taken by their unsuspecting parents. Universal Orlando took no action to detect, avoid nor prevent this offensive and discriminatory behavior repeated at its park and hotel event. See below photos attached as exhibits and referenced in further detail herein: 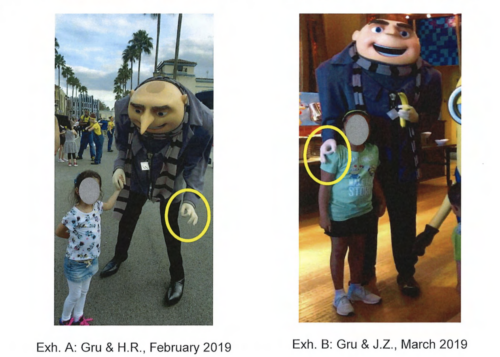 The plaintiffs claimed the actor caused them:

The Zingler daughter wanted to use a photo in school. However, she could not use it “because of the White Power symbol prominently displayed in the video-still photograph.” Therefore, she became “emotionally upset, humiliated, embarrassed and suffered a loss of dignity.”

The Zinglers told their child the “man did a bad thing to her because he did not like her because of her race and color.”

The conversation caused the child “emotional harm, humiliation, embarrassment and loss of dignity when realizing that the man dressed as her beloved animated character placed a symbol on her shoulder in clear indication of his hatred of her due to her race and color.”

The parents also complained that other Universal employees encouraged the actor’s behavior because they lured the Zingler’s daughter “to stand beside Gru and watched knowingly as Gru placed the hate symbol on” her shoulder.

Have these families never been to a theme park before? Characters have employees with them to help out with pictures and autographs. They also stay with the characters to help keep everything in order in case a bunch of families swarms a character.

The Zinglers “discovered” the actor made the OK sign when they recently looked through the photos.

Universal fired the actor! Thankfully, no one revealed the actor’s name. This poor person did nothing wrong:

“We never want our guests to experience what this family did. This is not acceptable and we are sorry – and we are taking steps to make sure nothing like this happens again. We can’t discuss specifics about this incident, but we can confirm that the actor no longer works here. We remain in contact with the family and will work with them privately to make this right.”

Tiffiney and Richard Zingler “just wanted to take them to see the minions.”

The Zinglers found a video “that confirmed their worst fears” after seeing the sign in more pictures.

Richard insisted that the gesture is “more than an ‘OK’ sign” and not everyone understands “what the sign means.”

The supposed racist intentions behind the OK gesture blew up during the Army and Navy game in 2019. The Navy launched an investigation, wasted time and money, to find the cadets played the “circle game.”

The Anti-Defamation League even said: “Because of the traditional meaning of the “okay” hand gesture, as well as other usages unrelated to white supremacy, particular care must be taken not to jump to conclusions about the intent behind someone who has used the gesture.”

sounds like the kids should be suing their parents for unnecessary stupidity.

If anyone deserves to be sued for inflicting harm on the child— which I believe actually occurred– it should be the school and the idiot parents whom are the ones that caused the harm, not Universal or the actor.
That being said, the actor should sue Universal for wrongful termination.

The “OK” hand signal never had anything to do with race or racism, not ever. It’s kind of ridiculous, but an indication of how everything is racist now.

I have never seen an actual explanation for how the OK hand signal is racist, except as an intentional 4chan joke to randomly pick some gesture and assign racist meaning to it in order to see if it would stick.

You know that, I know that, everybody else knows that. Either the people claiming it’s racist are stupendously ignorant or they’re acting with malicious intent.

I don’t think anybody is that stupendously ignorant except on purpose, so..

Think of the kind of life you live when you have time to worry about people’s finger postions. I wonder if the generation of the 30s cared if someone did an OK sign.

Mary you left out Leftist families, I doubt 1 real conservative buys this crap.

I just looked at the photo of the offended mixed race children and lo and behold, the little brother is making the horrific racist, imperialistic, supremacist sign with his right hand!! Just like Gru!
Circle Game anyone? Or is it just little brother’s non-marginalized half that is acting out.

Ridiculous. The lawyers representing these families should be disbarred

White power… Ok. Diversity (e.g. racism, sexism, ageism), inequity, and exclusion is a dogmatic belief of the Pro-Choice religion (e.g. denial of women and men’s dignity and agency, and reduction of human life to property) that breeds adversity is a progressive (i.e. unqualified monotonic process) condition and a first-order forcing of a low-trust society.

That said, diversity of individuals, minority of one. Baby Lives Matter

The insanity of it all will it ever end

Not till we make THEM afraid to continue it

The worst part of this fiasco is the weasel worded statement by management catering to the simpleton snowflake parents. Then the audacity to fire the actor! We are becoming sicker and sicker

This was so traumatizing that it wasn’t even noticed until the snowflakes looked through the photos!

I can’t believe this guy or the guy in Cali was fired. They should both sue for wrongful termination.

What’s insanely ironic is that this movie character is a VILLAIN!
A “villain with a heart of gold,” in the classic schizophrenic Disney tradition.
What did you expect, parents? You trusted a villain, and you got conned!
That’s now the Magic Kingdom motto in a nutshell, isn’t it?

Also, wasn’t this hand signal used for Obi Wan’s jedi mind trick in Star Wars? How long before that scene is cancelled?

Alec Guiness (RIP)…enlighted hermit jedi and racist before his time

Being hermit, maybe he didn’t get the memo about a racial ‘disturbance in the force’.

Apparently, there is absolutely no fear of sanctions over frivolous lawsuits.

This is starting to remind me of Pakistan’s wackadoodle blasphemy law, where it is a crime (punishable by death) to “insult” Muhammed or Islam.

One Pakistani Muslim received a business card from someone whose first name was Muhammed. He threw the card away and was charged with blasphemy. While in prison awaiting trial he was murdered (probably by one of the prison guards).

We are not at that point. Yet.

Take parents who are dumb-as-rocks to begin with, but, sufficiently mercenary to look for a quick legal payday; add a dose of Dhimmi-crat(TM)-brand narcissism, perpetual grievance and contrived victimhood (New and Improved Triple-Action Formula!), and, this is the manifest, farcical idiocy that ensues.

Give them lifetime passes to Disney and tell them to go away.

Fuck that. They fired the person. You know, the “actor” that was probably paid shit by Disney to parade around their park for minimum wage in 90℉/80% humidity weather with few if any breaks for meals or bathroom runs.

That should be enough for these asshole that sue for such things. Nothing more. Especially not lifetime passes to Disney.

It’s Universal, but your point is well taken.

Yes, Ok. Also, when Obama flashed the Heil Hitler sign when he was stepping off the plane. Nice and straight. Perfect angel and form.

i have been white all my life and never heard of this sign until liberals wild imaginations invented it.

The madness is nearly everywhere, and expanding. When everything can be labeled racist, these flakes can make up crap and the dinosaur media, a wholly owned subsidiary of the Democrat party, will carry their water. eg: Gay used to mean happy, now…

Looking at the photos, it appears that what is on the character’s left in one is on the right in the other. Especially note where the scarf around the character’s neck comes under the part around his neck on the same side with the hand making the supposedly offending gesture. Also, note that the other “hand” appears to have an index finger longer than the middle finger and the apparent gap between the index and middle fingers. It certainly appears that the gesture is an artifact of how the costume was constructed.

It is also interesting to note the amount of time that has passed since the photos were taken and when a lawyer convinced the people to become aggrieved and try to pick Universal’s deep pockets.

Mmmmm. Maybe the actor or actors weren’t fired after all. Maybe the costumes were quickly altered after the complaints to change the hand positions. Someone should start a Twitter thread – Show us your pics of Gru at Universal Orlando. I’d love to see the results. Wouldn’t it be a kick in the gut to the plaintiffs to find your suspicion is correct?

It looks like summer in these photos. Those costumes can get really hot. It might have been a signal to the surrounding employees that he was still “ok” to continue. There might have been other hand signs indicating if he needed to leave the area.

Also, why are we assuming the guy in the suit is “white”?

At this time, we do not know the race of either of the “Actors.”

We do not know why the actors made the symbols.

One of the actors actually could be a Cuban.

JZ’s parents, caused her pain, as shown in complaint paragraph 44:

Upon discovering the incident, J.Z.’s parents, Tiffiney and Richard Zinger,
explained to their daughter that a man did a bad thing to her because he did not like her because of her race and color. As a result, J.Z. suffered emotional harm, humiliation, embarrassment and loss of dignity when realizing that the man dressed as her beloved animated character placed a symbol on her shoulder in clear indication of his hatred of her due to her race and color.

Note that it is impossible for the parents to know why the symbol was used.

I love the use of creative language to frame otherwise innocuous behavior by the Universal staff as malicious.

All founded on the racialist hysteria hyped by every institution in our country.

If course there will be a settlement.

Universal should sue the families for slander for falsely accusing them of using a racist symbol when in fact they used the patriotic, universally understood, and critically important “okay” hand sign. These malicious families must not be allowed to impose their intentional misunderstandings on the rest of society.

The ok symbol is not a white supremacist symbol and that should be the defense and there should be a counter lawsuit.

But SPLC says it is, so legally, it must be so.