No, Pelosi. And stop using your faith as a weapon and shield to justify your support for infanticide. 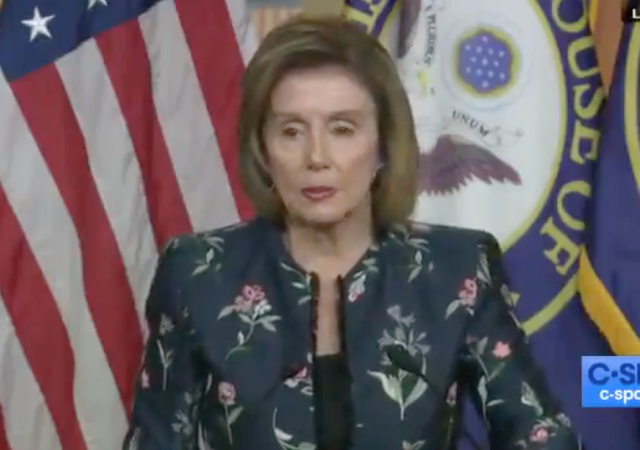 When I went through RCIA the teacher said life is important. We cannot compromise on life. Protecting life starting at the room has been in our Catechism since the beginning.

The left wants to eliminate the Hyde Amendment since it bars the federal government from using taxpayer money to fund abortions except to save the life of the mother.

A reporter asked “devout Catholic” Nancy Pelosi about their crusade to fund infanticide with our money. She tried to deflect, but the reporter eventually forced out an answer from her.

The reporter asks again why they want to overturn the law. Pelosi said sternly:

Because it’s an issue of health of many women in America, especially those in lower-income situations, and different states, and it is something that has been a priority for many of us [for] a long time.

As a devout Catholic and mother of five in six years, I feel that God blessed my husband and me with our beautiful family, five children in six years almost to the day. But it’s not up to me to dictate that that’s what other people should and it is an issue of fairness and justice for poor women in our country.

In other words, you cannot get yourself out of poverty and succeed unless you murder your unborn child.

My mother raised me on her own my first year. I had severe medical issues. She worked all day. Then took care of me all night. Not to mention the seizures I had and all the doctor appointments. The in-house nurse appointments.

You do not have to murder your baby. There is no justice in murdering an unborn human being who has done nothing wrong.

"It’s an issue of health of many women in America…and it is something that has been a priority for many of us…as a devout Catholic and mother of 5 in 6 years, I feel that God blessed my husband and me with our beautiful family…"pic.twitter.com/iKeCcWA5y0

And the Catholic bishops of California respond: https://www.cal-catholic.com/archbishop-cordileone-answers-the-60-pro-abortion-democrats/

If you care to read past their response too Catholic politicians who support abortion a link at the bottom of the article answers the other 15 points.

Convenience abortions are not about “health” Nancy, they are about convenience.

And it should not be the responsibility of taxpayers to fund convenience abortions for any woman, regardless of her financial status. Pregnancy can be easily, and quite cheaply, avoided.

Keep women appointed, available, and taxable is a dream of feminists and masculinists, alike.

That said, can they abort the baby, cannibalize her profitable parts, sequester her carbon pollutants, and have her, too? A wicked solution. Yes we…. they can.

Every politician who supports abortion/votes on abortion issues should be required to personally witness one. It should be one of the latest month allowed.
They wouldn’t let such an abortion happen on their dog.

“Devout Catholic” — What’s one lie on top of thousands of previous lies? Her soul was sold long ago. She should be terrified but remains defiant and arrogant.

And hammered most of the time.

The Pro-Choice religion denies a woman and man’s dignity and agency, and reduces human life to a property, a “burden”, that is viable, profitable, or eliminated in a wicked solution to a purportedly hard problem.

What about the POOR BABIES?

The poor women, too. Rather than take a knee, a women and man need to stand for [Black, Brown, other diversity classes] Lives Matter.

They’re not babies. They’re “non-people.”
This from the same party that made this mistake once before, against an entire race,
and caused a war and actual systemic racism, both of which split the country viciously..
You would think they would learn from their mistakes, but they never do.

The democrat/socialist are worst than Socialist Josef Mengele!

More have been murdered under their watch then Mengele!

The democrats do not want to any steps to prevent babies from being poisoned or actually be torn apart.

I cannot remember when a democrat claimed they were personally against abortion.

From Jew privilege to White privilege, and a baby can be a catastrophic, per chance profitable “burden”. As if there remains a mystery in conception. Not if, not how, but when. Elective abortion under the Pro-Choice religion is a wicked solution to a purportedly hard problem. A religion that denies women and men’s dignity and agency, and reduces human life to a property. Deja vu.

Josef Mengele! was a Nazi not a socialist,

“babies from being poisoned or actually be torn apart.”

Abortion is about foetus’s not babies, nor are they torn apart. Do you actually know anything about the arguments for and against abortion? Like personhood or bodily autonomy?

Slaughtered in the most merciless way imaginable. Do these morons think these defenseless little souls just peacefully go to permanent sleep and simply disappear? In the process of abortion their limbs are torn from their bodies, or they are burned with acid for up to an hour. It is an agonizing process that these demonic liberals RICHLY deserve themselves. Let’s put Pelousy at the top of the kill list.

Not “kill”. Not “murder”. Abortion is socially progressive, thus a popular conception of “good”, or something.

It remains my considered opinion that abortion supporters should be drawn and quartered to give them a taste of what babies suffer.

It seems okay to me. That’s more or less the majority view. Not being a slave to catholic dogma is okay. Americans take religion a la carte. The opposite would get no votes at all.

I’d choose a religion by the quality of the music they play.

You are the first person to explain to me the popularity of Rastafarianism.

“Issue of fairness and justice for poor women.”

Nancy had best pray that her putative religion is the fraud that her actions indicate that she actually thinks it is, for if the teachings of the church be true, if there be a God, she will suffer the torments of eternal damnation.

Couldn’t Pelosi simply donate personal funds to support this cause?

Why not keep the Federal govt out of contentious social policy debates and allow the States to decide based on the culture of that State?

Wouldn’t a bit of reluctance to wade into every issue with a National one size fits all policy from DC help to lower the temperature of our political discourse?

Don’t be fooled. Nazi Pelosi doesn’t give a damn about “poor women” any more than she gives a damn about any other human suffering.

For the Ds, abortion is about ONE thing: selling baby parts. (Eugenics is a bonus.)

That’s why PP has such a vested interest in keeping their abortuaries running, and why PP funnels tons of $$$ to Ds to keep them in power.

Taxpayer-funded AR-15s and ammunition are an issue of fairness and justice for poor Americans.

Nordic Prince gets to the real issues here.Big bucks.And it is evil.

As the Bishop of San Francisco stated: “It is cooperation with moral evil.” That’s what Ms. Pelosi and her fellow Democrats are doing. And they want me to join them by having my tax dollars used to fund this evil.

You know, Nancy The Devout Catholic, that the majority of these women are consenting to sex. If you have consensual sex then you have to deal with the possibility that pregnancy will result. My parents and my schoolteachers all mentioned this to me when I was growing up, and this was back when there were no cell phones or internet–we had to learn from our elders, or read these things called “books”.

Reminds me of the Holy Roman Empire which was neither holy, nor Roman, nor an empire. Devout Catholic Nancy Pelosi is neither devout, nor Catholic, but on the plus side is an excellent example of how plastic surgery can tighen your face to where you can no longer smile.

Back in the day, her phone number was neatly written on the walls of the stalls in the Vatican Hotel.

Rumor has it that “Mother” Teresa was buried in a pair of Pelosi’s panties.

Rumor has it that Ruth Bader Ginsburg was driving the car that killed Mary Jo Kopechne, but Ted Kennedy took the fall out of the goodness of his heart.

“She died of suffocation in her own air void. It took her at least three or four hours to die. I could have had her out of that car twenty-five minutes after I got the call.” — diver John Farrar, Inquest into the Death of Mary Jo Kopechne, Commonwealth of Massachusetts, Edgartown District Court.

But Ted Kennedy didn’t report it till the next day.
.