The chief said DC has too many guns. Um, guns are not the problem. Criminals are the problem. 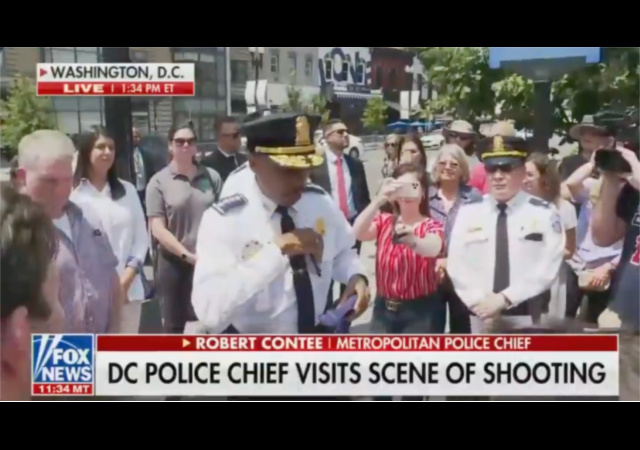 A few shootings in Washington, DC, have made national news. The first happened during a baseball game outside of the stadium. The second occurred in a popular part of town.

However, he also said DC had too many guns. I’ll get to that in a minute.

D.C. police chief Robert Contee on rising crime in the city: "It's unacceptable in any community…This should be shocking to the conscience of every person in our city. I don't care where you live, it has the attention that it is gotten now b/c it's happened where it happened." pic.twitter.com/pNIvgBlI0l

Contee ends with 🔥: "Why is it that a guy who murdered somebody is out in a community after having been arrested two or three months later…with a firearm? What did we think he was going to do…How are we holding people accountable?"

Contee is 100% correct. Yet, he said something that bothered me (emphasis mine):

CONTEE: “But what happened out here last night, I was out here last night, some of you live here, some of you may have just been out here, but that was unacceptable. It’s unacceptable in any community. The reality is we have situations that happen like this in our city all across our city. It has been happening for a long time. Last year we had over 922 people shot in our city, last year; 198 people murdered in our city last year. This should be shocking to the conscience of every person in our city. I don’t care where you live, it has the attention that it is gotten now because it happened where it happened, because we had an incident at the national state level. But this issue — this issue that is crossing our city, there are too many guns in our city in Washington, D.C..”

VIDEO – DC Police Chief: We Have Too Many Guns in Our City https://t.co/OcorZnCIth

Too many guns? It’s common sense the majority of the population in Oklahoma City, Tulsa, Dallas, Austin, Houston, etc., have guns. Multiple guns in fact.

Gee, why could that be? Could it be that guns are not the problem?

Exactly. The Second Amendment is not the Twilight Amendment, a wicked solution, a legalized rationale to elective abortion. Most people recognize the limit of its legal, even moral use. In self-defense, it is not a license to kill, but a means to mitigate the threat (not merely “burden”). In hunting, it is not a means to inflict mass casualties. In leisure, it is not dual-use equipment. It is intended for American citizens capable of self-moderation and moral purpose to use, to train, and to bear in the hopefully unlikely event that a militia is called.

Unless Soros buys you off.

Any time you want to take away the illegal guns in the possession of felons, feel free. As for the legal ones, they are largely not a problem.

No gun is illegal

You’re right that the system needs to be overhauled, Chief. You can’t have judges and politicians and prosecutors putting violent criminals back on the streets and not expect crime to go up. Trying to blame the guns is just an attempt to divert responsibility away from those who don’t hold criminals responsible. I doubt you’ll find many, if any, lawfully-owned guns being used in those criminal shootings. Don’t blame the guns for the crimes, blame the criminals.

We know of one gun too many… in the hands of a certain cop in the Capitol 1/6.

You can’t solve a problem if you can’t recognize what is causing it. D.C. has major cultural and sociologic issues that they won’t address. Look at the recent carjackings…. teen criminals with sociopathic personalities. They can’t handle the truth. It’s now generations deep.

Too many guns? “Coddling criminals?” Tell that to the dead Pakistani Uber Driver. Let me take a WAG, it’s too many criminals.

It’s outrageous to see “families suffer when they don’t have to b/c we are putting violent criminals, allowing them to be back out…That’s unacceptable. So what do we do about it? We have honest conversations w/the people, the leadership…the council members.”

Swell. More “conversations”. Maybe the Chief thinks the jawbones of the asses in Washington can do to the gangbangers what Samson did to the Philistines.

More likely, though, is that they will slay the Bill of Rights instead.

Liberal Playbook: Chaos is a hallmark of a totalitarian takeover.

The reason you have to coddle black criminals is because white police officers will get into trouble if they don’t. That is the whole premise of the black lives movement.

“I dindu nuffin” is what perps say.
“There are too many guns in our city” is what cops say.
They are semantic equivalents.
They mean “not my fault, boss, must be somebody else’s.”

DC needs more guns, rather than fewer. The problem is, the laws operate to deprive law-abiding citizens from protection, and criminals take advantage of the situation.

Daddy was right….you can have it when you pry it from my cold, dead fingers.
I guarantee I won’t be the only one down.

Guns are not the problem – Cain killed Abel with a rock.

That is the fault of RethugiKKKans, who are in the pocket of the powerful…er….rock lobby.

Rural counties with almost no crime have about 2.5 times as many guns per capita.

Crime is getting worse. Maybe it’s caused by white people or guns or slavery or COVID. Or maybe it’s just criminals with weapons.

The Chief sounds like he’s worried for his job. When the DC in crowd starts getting shot, someone’s head will be on the block