Police couldn’t tell a father about his son because he was taken by another “institution,” meaning “plainclothes officers at the protests.” 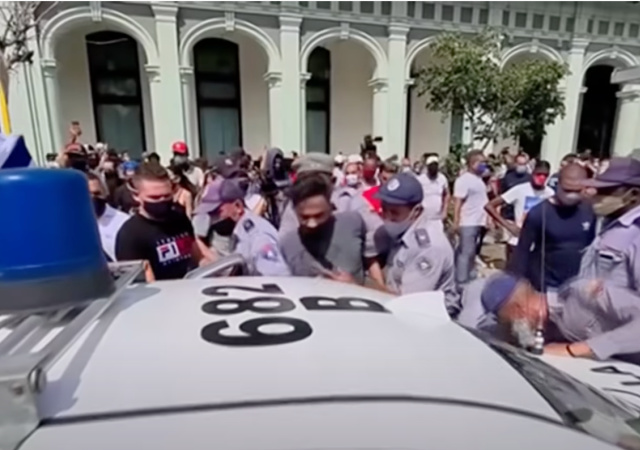 I’m seeing reports of 57 to hundreds of missing or arrested Cubans after Sunday’s protest, which spanned across the island. People flooded the street, demanding an end to the Communist regime.

Frances Martel at Breitbart, who, I cannot stress enough, is a must-follow on everything Cuba, reported 57 missing or imprisoned Cubans include priests:

Cuban civilians documented multiple instances throughout the country of state security agents firing live rounds into crowds and beating protesters with baseball bats and other weapons. Witnesses also documented the use of tear gas and other repressive anti-riot gear.

Cuba Decide, which advocates for the replacement of the repressive Communist Party autocracy with an election-based democratic system, published the names Monday, stating these are only those whom they can confirm with certainty are missing or in police custody as of 10 a.m. local time Monday.

At the top of the list is a perennial target of Castro repression: José Daniel Ferrer, the head of the largest Cuban dissident organization, the Patriotic Union of Cuba (UNPACU). While UNPACU has not taken credit for organizing any of these protests, it has laid the groundwork for years on exercising peaceful assembly on the island, often at the price of Ferrer’s arrest. Ferrer most recently disappeared in October 2019 after organizing an anti-communist protest the month before in commemoration of the feast day of Our Lady of Charity, the patroness saint of Cuba. He resurfaced in April 2020, having clearly endured torture at the hands of the regime and suffering from several health conditions that he was diagnosed with during his time in police custody. Police never justified to Ferrer or his family his extended stay in prison.

Also missing at press time following the Sunday protests is Father Castor José Álvarez Devesa, a Catholic priest who has spent years advocating for the end of authoritarianism in Cuba. Álvarez was one of three priests behind a famous 2018 letter to Raúl Castro seeking free elections in Cuba and has used his position as a clergyman to urge a peaceful transition out of communism. Reports on Monday indicated that Cuban state security severely beat Álvarez in his native Camagüey, leaving him with a visible bloody head injury before his disappearance. The priest’s whereabouts remain unknown.

Reuters reported the authorities arrested at least 100 protesters. These include people who marched on the streets, but also people who attempted to leave their houses.

The regime shut down the internet and other messaging services. People have to stand outside of the police station to find out about their loved ones:

Ariel González told BBC News Mundo he had been to his local police station twice to enquire about his son, a 21-year-old student who was arrested during the protests.

“I knew he got roughed up because some of his friends who were with him told me. At the police station they told me they couldn’t tell me where he is because he was taken by another ‘institution’,” he said referring to the presence of plainclothes officers at the protests.

Today marks 27 years of one of #Castro’s most horrendous crimes,the sinking of tugboat #13deMarzo. The youngest victim was 6 months old.With powerful hoses children were swept from their parents embrace.Any doubt as to why #Cubans are on the streets demanding freedom? #SOSCuba pic.twitter.com/wmpkpHnnvm

The Black Spring was almost 20 years ago. Just like in Hong Kong, part of what is fueling the Cuba protests is that a new generation with no memory of the last repressive wave is now grown up.

Just like in Hong Kong, Chinese money will come in to crush them.

The regime cut internet access to avoid the spread of information. There are reports of murders, including that of a 13 year old.
But it will be difficult, if not impossible, to properly account for all crimes, for all victims of the repression.

Edited for accuracy — according to their Marxist overlords.

Airdrop in crates of surplus arms and ammo from the CMP stocks.

Make them bleed, Cubans. Do not go gentle. Do not let them take you.

Young ‘progressive Americans’, learn from this episode like your future depends on it.

They’re busy studying how to make the opposition disappear overnight.

For when cancel culture doesn’t work.

The US isn’t going to lift a finger to help. Our present admin can’t even bring themselves to support the actual aims of the protesters.

Our current DC Regime has more in common with the Cuban Marxist regime than with the protesters.

Instead of airdropping CMP rifles, the Biden admin are going to airdrop Holy Jabs, and pretend the “unrest” is all about the Scamdemic.

They have to defund the police. That’s what we do when we want to change the form of government.

Maybe if the arrested protesters’ families get rid of their Legos their murderous Commie rulers will be easier on them. Meaning they might not be summarily executed with their families never learning their fate.

Instead they’ll only get the Jan 6 ‘Insurrectionist’ treatment. The American Gulag treatment — locked away without bail, no set trial date, no access to the evidence being used against them, beaten by guards, no family visitation, drastically inflated charges, job lost, financial life ruined, re-education indoctrination sessions, and so on and do forth.

AKA, the usual things Marxists everywhere do to their political enemies if they can. That is, if they don’t have them shot.

Solzhenitsyn’s words ring truer than ever:

“And how we burned in the camps later, thinking: What would things have been like if every Security operative, when he went out at night to make an arrest, had been uncertain whether he would return alive and had to say good-bye to his family? Or if, during periods of mass arrests, as for example in Leningrad, when they arrested a quarter of the entire city, people had not simply sat there in their lairs, paling with terror at every bang of the downstairs door and at every step on the staircase, but had understood they had nothing left to lose and had boldly set up in the downstairs hall an ambush of half a dozen people with axes, hammers, pokers, or whatever else was at hand?… The Organs would very quickly have suffered a shortage of officers and transport and, notwithstanding all of Stalin’s thirst, the cursed machine would have ground to a halt! If…if…We didn’t love freedom enough. And even more – we had no awareness of the real situation…. We purely and simply deserved everything that happened afterward.” Aleksandr Solzhenitsyn, The Gulag Archipelago 1918–1956

Babylon Bee is having a field day with this news item. Many headlines:

Democrat Governors Afraid Cuban Desire For Freedom Could Spread To The U.S.

‘You Just Don’t Understand Socialism Like I Do,’ Says College Freshman To Man Who Escaped Socialism On A Raft

Biden’s State Department: ‘We Support The Cuban People As They Rise Up To Protest Georgia’s Voter ID Laws’

They are just protesting for more COVID vaccines, or so I heard…..