LOVE IT: “There’s no turning back for us now. The pandemic has been a blessing — an opportunity to take ownership of our children’s education.” 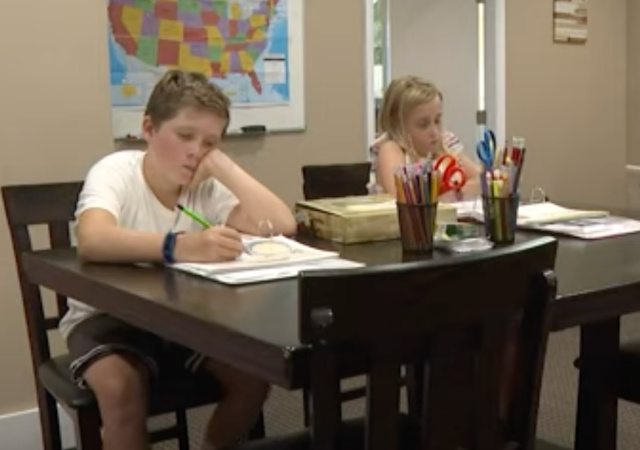 Parents realized public education is a fraud during the COVID-19 pandemic. Childen suffered as governments and officials virtue signaled while unions and teachers whined.

A lot of those parents decided not to look back. Homeschooling remains popular even though most schools will open this fall:

The specific reasons vary widely. Some families who spoke with The Associated Press have children with special educational needs; others seek a faith-based curriculum or say their local schools are flawed. The common denominator: They tried homeschooling on what they thought was a temporary basis and found it beneficial to their children.

“That’s one of the silver linings of the pandemic — I don’t think we would have chosen to homeschool otherwise,” said Danielle King of Randolph, Vermont, whose 7-year-old daughter Zoë thrived with the flexible, one-on-one instruction. Her curriculum has included literature, anatomy, even archaeology, enlivened by outdoor excursions to search for fossils.

Angela Valentine’s son Dorian attended schools in the Chicago public school system. The union in the city made the most news in 2020 due to their determination to stay at home instead of putting the kids first:

Angela Valentine said Dorian was often the only Black student in his classes at a suburban Chicago public school, was sometimes treated unfairly by administrators, and was dismayed as other children stopped playing with him.

As the pandemic eased, the family decided to keep Dorian at home and teach him there, using a curriculum provided by National Black Home Educators that provides content for each academic subject pertaining to African American history and culture.

“I felt the burden of making the shift, making sure we’re making the right choices,” Valentine said. “But until we’re really comfortable with his learning environment, we’ll stay on this homeschool journey.”

Charmaine Williams and her husband chose to homeschool their two children. The St. Louis school they attended complained about their son’s behavior.

Homeschooling allowed them to craft a curriculum to help both succeed, especially their son:

“At school, children have to follow a certain pattern, and there’s bullying, belittling — compared to being home where they’re free to be themselves,” Williams said.

“There’s no turning back for us now,” she added. “The pandemic has been a blessing — an opportunity to take ownership of our children’s education.”

Homeschooling became a blessing for some parents with children with disabilities:

For some families, the switch to homeschooling was influenced by their children’s special needs. That’s the case for Jennifer Osgood of Fairfax, Vermont, whose 7-year-old daughter Lily has Down syndrome.

Having observed Lily’s progress with reading and arithmetic while at home during the pandemic, Osgood is convinced homeschooling is the best option for her going forward.

She has made the same decision for her 12-year-old son Noah, who didn’t like the remote classes offered by his public school in the spring of 2020, and did homeschooling throughout the 2020-21 school year. It went so well that they want to continue for at least a few more years.

“He told me he was learning so much more at home than he ever did in school,’’ Osgood recalled. “He said, ‘School is just so chaotic — we don’t get very much done in any particular class. Here, I sit down, you tell me what to do, and minutes later I’m done.’”

Heather Pray of Phoenix, Maryland, says homeschooling has been a major success for her 7-year-old son, Jackson, who has autism. The family made the switch because Jackson was struggling with the virtual learning that his school provided during the pandemic.

“My son did great (with homeschooling), even with just two hours of schoolwork a day,” Pray said. “I got him into piano lessons, taught him to read.”

Homeschool applications doubled in California during the pandemic. The state received 34,715 affidavits to homeschool their children last school year. Only 14,548 sent in affidavits in the 2018-19 school year.

We need to protect our children from our demented public officials.

There is no excuse for masking kids.

A team of Johns Hopkins researchers recently reported that when studying a group of about 48,000 children, they found zero COVID deaths among healthy kids…

Between the unions and the unknown consequences of the masks (hypercapnia for one). We need to rethink education not policing

I have always used every opportunity to teach both my children and grandchildren. I wove teaching into every aspect of their lives.

America was build on work ethics first, and once people were established, education. People who shun the intent of education will not do well in a technological , that is their own fault, not ours.

A dark cloud hanging over the surge in homeschooling is the fact that the educrats hate it and want it banned. The Joseph Goebbels media never passes up the opportunity to dump on homeschool parents as dangerous terrorist wackos.

Look for calls for Federal mandates that require parents to use a government-approved curriculum that includes CRT and other Communists goodies. Next will come efforts to require parents be licensed teachers Finally, look for child protective services to start removing special needs children from the care of homeschooling parents on the grounds that NOT sending their child to a public school hellhole constitutes abuse (an education prof at the university near where I live has proposed just that – in my hearing, knowing that my wife and I homeschool and our child is on the autism spectrum). All these things and more have been proposed by Communist politicians.

There is no question that UNESCO has set its sights on homeschooling so that what it calls NGAs–Non-Governmental Actors–are nonetheless replicating what it calls Quality Learning that actually seeks to deemphasize the transmission of knowledge in favor of a largely non-cognitive, change the child at a noetic level, approach. Parents need to be very careful where they get their curricula from.

If they use digital learning they should be aware of the long-standing psychological research every on-line provider and immersive curricula is aware of. The human brain cannot differentiate between virtual experiences and immersive role-playing online and in person in a physical reality. One, however, is much easier to program so that the experiences offered can be planned around the desired neural effects. This reality was discussed by Willis Harman in his alarming book Global Mind Change and was reiterated (with joy at the implications) by Institute for the Future’s Jane MacGonnigal at an ISTE annual conference.

Be careful parents, but also have fun with the opportunity Homeschooling CAN still allow that is largely becoming rarely available elsewhere now.

You are correct. Eternal vigilance required.

Remember the case of the German homeschooling family seeking sanctuary in the US and being denied by the Obama administration.

This, and the elimination of the school choice program in Washington DC (the beginnings of which are documented in the movie “Miss Virginia”) are two prime examples of the evil of the Obama administration.

Anybody coming to take my children had better be bullet=proof because that’s not happening. My wife has home-schooled them for years now and they perform above grade level as well as all of them being bilingual as they all speak American English and my wife’s native Czech and yes, I do pay a tutor to come help her with the English lessons. Thanks to covid, I no longer spend my days away from home because I had to sell off my business, so they’re not sneaking in at any time.

Homeschooling, especially if it is not just a switch to digital learning, lets a parent keep the focus on the traditional transmission of knowledge. It would break most parents heart to hear how often education webinars this summer for K-12 teachers, administrators, and informed interlopers like me have (using graphics) pointed out the decision to de-emphasize “the information processing” theory of learning in what is now planned for the classroom.

Any parent who wants to teach their child to read would be well served by becoming familiar with Diane McGuinniss’ work on how the brain processes print. https://mitpress.mit.edu/contributors/diane-mcguinness

It’s truly fascinating and then you can use the actual logic of how print works as a code for sounds. When you tell the kids that “letters don’t have sounds so much as sounds have letters” it becomes a game of probability that is fun for the child. A phonetically fluent reader has quite literally rewired their brain, which is precisely why the Reading Wars developed in the first place when you follow the history.

Teaching one’s own children has the additional benefit of increasing the family bond.
Looking back on life with my kids, two of the real joys are having taught both of them how to read, with Dick and Jane books, and how to drive, with a stick shift.

I would also like to see groups of parents come together, hire their own teachers/tutors and start their own community schools.

To a certain degree that is already happening. Homeschooling parents will sometimes form co-ops where resources such as books and other learning materials are shared. Also, parents can take turns teaching groups of homeschool students. Sometimes these co-ops will hire a teacher or tutor.

My co-op is better than extended family for my kids. They are our extended family. Our teens see the toddlers and other parents as friends, in social gatherings, there are no age delineations for friends and games. And I know that other families in the co-op feel the same. We are family. Close and tight, and I love those kids almost more than I love my nieces and nephews.

.
“Parents realized public education is a fraud during the COVID-19 pandemic.”

They may have realized this during the pandemic, but public education has been a fraud for more than half a century. But it’s “free”.

It’s only free when you don’t pay attention to how much they’re stealing and what you get for it.

My charter school is far cheaper than any other school in the area at $8.5K per kid per year. That is crazy expensive. A lot of schools are now breaking $15K or $20K.

I don’t get how areas afford it.

If the teacher unions are able to shape and influence policies that delay reopening in the fall or cause kids to be masked there will be hell to pay.

The Rona + CRT/Equity has made everyone very aware of the malfeasance of the teachers unions and the school boards they dominate. Support for government schools is dropping.

Calls for the public education dollars to follow the student to the educational environment that best fits the needs of the student as determined by the parents grow everyday.

This is the moment to push for not just choice but for funding the student and not the government educational system. Let’s get busy contacting State legislature.

I wouldn’t wait for a damn virus to home-school my child. What’s being taught in these government brain-washing camps would have given me the impetus long ago.