Stop it. Not everyone criticizing you is a sexist and/or racist. 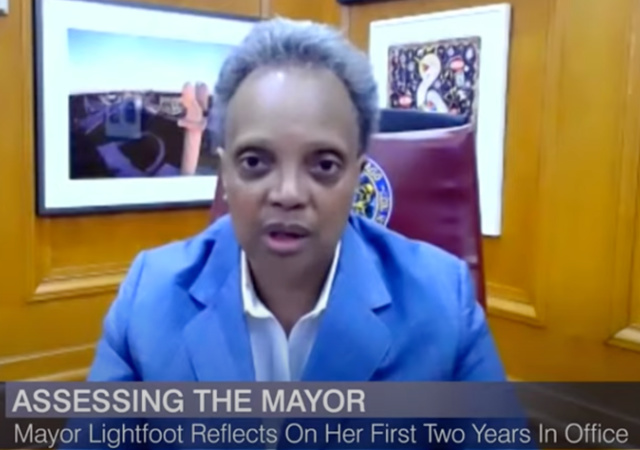 Chicago Mayor Lori Lightfoot claimed around 99% of the criticism thrown at her is because of racism and sexism:

“About 99%” of the criticism Lightfoot gets as mayor is motivated by racism and sexism, Lightfoot told WTTW News.

“Women and people of color are always held to a different standard,” Lightfoot said. “I’ve known that my whole life.”

Lightfoot said she was elected to “disrupt the status quo” and that is designed to make people uncomfortable but pledged to continue improving.

Lightfoot said her critics are motivated to speak out because they “don’t like to see a woman assume power.”

I am sick and tired of people using the race and sex card to deflect criticism. Are some because of racism and sexism? Sure. But 99%? Heck no.

If you cannot take the heat get out of the kitchen. Wait, is that sexist?

Lightfoot’s comments give fuel to sexists. “See? Women cannot handle being in charge! They’re too emotional and whiny.”

Please stop ruining the progress women fought and sacrificed for so someone like Lightfoot could be mayor of a large city like Chicago.

It is not her skin tone, people do not like her because she looks like a bug, is not quite as smart as a bug, bites like a bug, and gets slapped like a bug.

Use her face for a halloween mask. It would scare the living daylights of little children. And grown men would shake in their boots.

I meant her, and other po oh-press blacks. Not me!

Thanks Mary-I needed a laugh!

Let’s ask the families of the thousands of murdered black people in her community.

She is le bron james stupid and moooochelle obama obnoxious.

She has a lot of redeeming value – to Soros and Communist China. That’s the problem. And that’s why she was ‘installed’ as mayor. (You really think her election was honest? What ‘voting machines’ did they pull this scam with – or did they even need them?)

You don’t know her. I’m sure she has some redeeming value, and if you knew her you’d see it. I don’t know her either, so I can’t say what it might be, but it’s got to be something. Her wife could probably tell you.

Lori.Lightfoot is a plant (no, not the leafy kind, but close intellectually). She was put where she is to destroy. She may like her dog, but in the big picture, she’s a racist useful idiot with zero redeeming values.

It’s probable her dog likes her. Not a certainty, mind you, but probable.

Are you calling her wife a dog? 🙂

I think her wife and Rosa DeLauro are littermates

She’s simply repeating the party line and response to all criticism of its policies, claims, and assertions. She’s saying what CNN, NYT, WaPo, MS/NBC, et al say whenever a Republican or conservative criticizes Dems.

This woman is Soro’s and Xi’s wet dream.

You can’t really be implying that you think Flip Wilson, the black comedian, was funny or well liked, can you? The black comedian who was known for his very good (and hilarious) portrayal of a woman? Keep on like that and your ‘racist’ credentials will be taken away from you…

Flip would be flipping out if he was aroud.

Why do you keep referring to Soros. What on earth has he got to do with anything?

Are you really that stupid, or do you just crave attention?

Because ivoking “Soros” for everyhing wrong is just plain stupid. The man does a lot of bad things, yes. But, he receives blame for everything from sponoring and supplying riots to causing cracks in sidewalks.

Because FineReport is a crazy paranoid person who sees Soros’s tentacles even where they aren’t there.

But they are in an awful lot of places. I don’t know of any reason to blame him for Lightfoot’s election, but he has been engaged in a deliberate effort to finance the election of attorneys general and district attorneys whose goal is to promote crime and destroy America. That’s not paranoia, it’s fact. So it’s not surprising that those tending to paranoia see Soros’s tentacles not only where they are, but even where they aren’t. As the saying goes, “just because you’re paranoid doesn’t mean they aren’t out to get you”. Soros and his son are out to get us, and if they’re not responsible for everything bad that happens it isn’t for lack of trying.

Don’t know whether you just act ignorant, or whether you ARE ignorant. Either way, you should be doing a lot less posting and lot more reading.

She may be right. Diversity [dogma] (i.e. color judgment), including racism, sexism, ageism (e.g. planned parent/hood), is a progressive condition under the Rainbow banner of inclusive exclusion and State-established Pro-Choice religion of the Progressive Cult, Corporation, Clinic, etc.

It couldn’t possibly be because of her epic-level incompetence and stupidity. Nope, not at all.

Nope, not at all.

As dumb as Kamala Harris. They both have been survivng on the same b.s. for years. Their game is over.

That wouldn’t happen if she hadn’t pulled out her deck of race cards. She dealt the game and now that she is behind she doesn’t want to play?

In fairness to Lightfoot, the previous Mayors haven’t had quite as much attention paid nationally, except in the last years of her predecessor. At least that I can recall.

Of course the increase in crime stats; both absolute numbers and in percentage hasn’t been higher. A trend of ‘higher highs and higher lows’ might be good for the stock market but not crime statistics.

In any event she wanted to be Mayor. Lead, follow or get out of the way!

The Mayor of Chicago is a national figure more often than not. The Daleys, Rahm Emmanuel, Harold Washington, Jane Byrne. . .

I don’t disagree. My awareness from 2001 thru 2015 was severely limited due to the demands and constraints of military service on my leisure time.

Lot’s of things flew under my radar during that period.

Careful. 2 more and she’ll appear in your home.

Take it like a man Lightfoot. You earned every word of criticism. Your “critics” are motivated by a desperate desire to save the city from violent crime and a downward spiral of doom.

We criticize her because with Chicago’s streets awash in blood of thugs and innocents, her response is inevitably to rearrange the deck chairs on the Amistad.

Are these the same sexist racists who elected her with no rational clue of how to perform the job of mayor?

Chicago is extraordinarily fickle and selective in its sexist racism.

“Women and people of color are always held to a different standard,” Lightfoot said.”

No, they were malevolent dicks. But they were competent at it.

If the first person you meet this morning is an a*e, it’s not a good start to the day. When everybody you meet today is an a*e, maybe it’s you that’s the a*e.

She can’t survive on ability, so she whines like another affimative-action idiot: michelle obama.

So, Lori Lightfoot, London Breed and Bill de Blasio walk into a bar…….

Make it Thunderdome and improve the story immediately.

– where they bump onto eric garcetti, obama and trudeau….

Now I’m curious — to what does she attribute the other 1%?

This story was a real softball and most people hit it out of the park. One or two swung and missed.

A large number of Chicago residents were unable to comment. They could vote from the graveyard but were not able to comment from it.

Years ago, the Chicago Machine kept people happy by collecting their garbage timely and preventing crime.

As I understand it from speaking to Chicagoans, they didn’t so much prevent crime as keep it corralled in certain areas, where people who didn’t live there didn’t have to worry about it.

Forget about it: Mayor Groot has gotta groot. It’s the only way s(he) can roll.

How did this Densa (Mensa’s inverse counterpart) candidate forget to include the obvious:

Once again, Lori Lightbrain proves Ron White to be the classic American savant. As Ron says, “YOU CAN’T FIX STUPID!!

“About 99%” of the criticism Lightfoot gets as mayor is motivated by racism and sexism, Lightfoot told WTTW News

No Lightfoot, it isn’t because you’re black, or a woman, or a black woman that people criticize you. It’s because you’re a complete and utter failure as the mayor of a major metropolitan city. But by all means, pull the race and sex card if it makes you feel better about yourself but don’t expect us to believe it.

The only way our criticism of her could be racist and sexist is if she maintains that her incompetence is a natural consequence of being black and lesbian.

She’s right, it is due to racism. As in her own racism in saying she will not give interviews to Caucasian journalists. If a white political figure said that about Black journalists, we would wonder where he kept his sheet and hood. As reported in the Chicago Tribune, “Mayor Lori Lightfoot chooses only reporters of color for interviews ahead of 2-year-anniversary, sparking debate over media diversity and access.”

I can think of many reasons to not like her and I don’t see the world the same way she does.