Chicago Gangs Outnumber Cops, Who are Retiring in Record Numbers, as Violence Soars

Chicago Gangs Outnumber Cops, Who are Retiring in Record Numbers, as Violence Soars 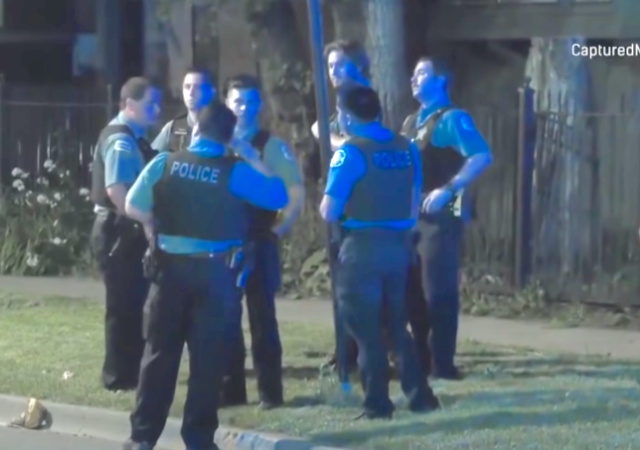 Chicago Mayor Lori Lightfoot will likely blame this on guns from other states.

It is not getting better in Chicago.

I think she eventually caved, but still. At first, she was like, no way.

Lightfoot changed with President Joe Biden! Now “she welcomes federal help in addressing gun violence in the city” without skipping a heartbeat:

Lightfoot, speaking at a press availability, says that she supports a variety of federal responses to the problem of gun violence, including additional “strike force” teams offered by President Joe Biden, along with resources from the FBI and other agencies.

“We’ve been in conversation with them about our sense of urgency around getting these resources up and activated,” she said. “I think the primary thing they’re going to do is really build upon the work that’s already being done in conjunction with our federal partners and CPD.”

More Chicago police officers have retired this year than in all of 2018.

That’s according to the latest figures from the police pension board, which show that, from January through June, 363 officers have left the Chicago Police Department, and another 56 are expected to retire in July.

“We are on track, I believe, to have one of the highest retirement numbers in the city’s history,” says Ald. Ray Lopez (15th), a frequent critic of Mayor Lori Lightfoot.

Lopez points the finger at Lightfoot. He said her “anti-police rhetoric” has “demoralized police and scared off potential recruits.”

Lopez told The Chicago Sun-Times: “Many of our officers are not choosing to leave law enforcement as a profession but are retiring early to go to other departments because they don’t feel appreciated and respected in their home city of Chicago.”

John Catanzara, president of the Chicago police union, says there’s also been an exodus of young cops who haven’t been with the department long enough to qualify for retirement benefits. Some have fewer than 10 years on the job but want to move to other police departments because they’re “absolutely miserable,” according to Catanzara.

He says those young officers take leaves of absence until they can get hired elsewhere because they’re sick of working 12-hour shifts, having days off canceled and being under what he describes as a constant threat of punitive action.

“You are literally treated like a rented mule and ridden until you can’t go any more,” the union president says. “Today’s hero, tomorrow’s zero.”

Of course, it always has to be “Gun Violence”, rather than violent criminals committing crimes while armed.

It’s a variation on “family run down in crosswalk by SUV”.

It is most simple. Would you want to report to a job where if you perform it the way you were trained and perform it correctly, you could face decades in solitary through a political lynching? I sure wouldn’t.

KTS Dre,
Sylvester, 31, exited Cook County Jail Saturday at 9:00 p.m. Two cars were waiting for him there. He was shot 64 times before being pronounced dead at Mount Sinai Hospital,
This was in the parking lot of the jail.

That will be a video at the top of the charts.

Shot 64 times? I thought somebody said there was an ammo shortage.

Now you know why.

Hopefully Lori Lightfoot can take time out of hiding from journalists to do something about this.

Why should she? As she noted, the headline on the post of “Chicago Gangs Outnumber Cops, Who are Retiring in Record Numbers, as Violence Soars” is completely false!

The mayor, in response to a question from the press stated clearly, “The premise of your question, which is it’s chaos everywhere, the fact of the matter is, sir — which you also didn’t point out, but I will so we get this straight — is we’re actually seeing a decline in homicides and shootings, yes sir,”

So there. Put that in your Hunter Biden crack pipe and smoke it! The mayor has spoken the truth. All other information and option shall be deemed false and should be rightly censured.

Oh, don’t think Groot still isn’t exercising her “picky” gene.
She’s told the feds (told them, make note) that she doesn’t want the National Guard. Not her style!
She demands they send the FBI, the DEA, the… ATF…?!
“We don’t want McGarrett! We demand Wiggum!”

….” the section of the bill imposing a class 3 felony criminal violation on a collection of acts and allegations so opaque, ambiguous, arbitrary and malevolent that virtually any officer now faces being transformed into a criminal…”
***
…”It includes the mandate that a police officer cannot review his own body worn camera before writing a report in a use of force incident, all but guaranteeing there will be inconsistencies between the report and recording of a high-stress,..”
***
etc.

I watched a video yesterday about a police officer called to Walmart where to large women of color were screaming at each other. He tried to separate them and suddenly two other people join in and they are all now screaming at the cop. When he tries to separate the original two by pulling one woman’s arm, she attacks him and starts to bite him. The cop hit the woman who was biting him. Now, there are protests and the cop is on suspension.

Who would want that job?

All part of the plan….

“Lopez points the finger at Lightfoot.”

This is probably part of it, but to me, an ex beat cop, I saw the writing on the wall when Chauvin was convicted for following MPD protocols in the arrest of George Floyd. If I were still a police officer, I would be quitting too. I simply won’t put myself at risk of decades in prison for doing my job.

Lightfoot, speaking at a press availability, says that she supports a variety of federal responses to the problem of gun violence, including additional “strike force” teams offered by President Joe Biden, along with resources from the FBI and other agencies.

Sound familiar? This is similar to what happened in Mogadishu in the 1990s. A weak, incompetent, corrupt civilian government lost control of the country (city, in this case) and had to call in equally inept outside forces (the UN, in Mogadishu’s case).

To hear the UN tell it, the rules of engagement used in Mogadishu were an attempt to protect civilians. That was a lie. In reality, the UN was terrified of losing political support for the intervention mission if the US and/or Europeans took casualties (which is exactly what happened). The militia saw that the UN was a toothless tiger, and began stealing food aid meant for the victims of the famine the Somali civil war had caused. Mogadishu – which was supposed to be a “weapons-free zone” – has open markets where war weapons – guns, grenade, RPGs , etc – were brazenly and openly sold and traded on the streets.

The FBI and ATF and other Federal agencies are under orders to find “white supremacists”. Yet the crimes in Chicago are largely non-white vs. non-white. Furthermore, these Federal agencies know that the first time a black Chicagoan is killed (or even injured) by a Federal agent the city will go up in flames. So the Feds will mercilessly harass white gun owners/dealers outside of Chicago and ignore the carnage in Chicago’s streets.

And as for the death toll in Chicago, it will miraculously go down. Not because people are not being slaughtered any more – they will be – but because no one has any interest in telling the truth. No one cared about the thousands who were butchered in Mogadishu after the UN arrived.

This would meet the Demon-rats push for federalization of police. As local police quit or are defunded, federal “assistance” law enforcement moves in and stays. They will “coordinate” the local police (i.e micromanage them) and end up running the show.
Add that to the spread of unaccountable Capitol Police and the trend is clear.