Trial Judge: “In other words, CDC can show no factor that outweighs the need to conclude an unwarranted and unprecedented exercise of governmental power.” 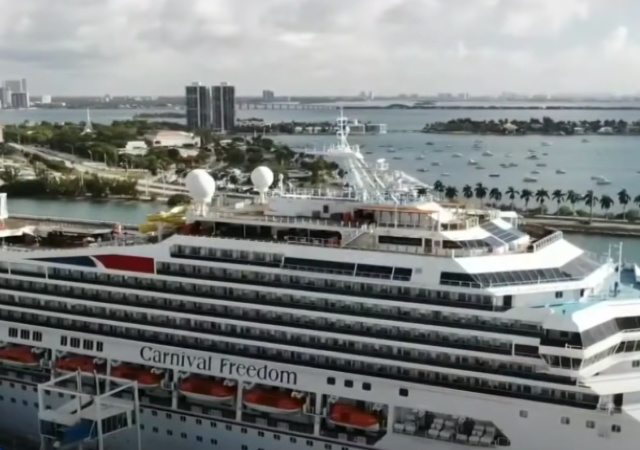 The Centers for Disease Control and Prevention (CDC) does not want to let go of its control of the cruise industry.

The CDC thinks the cruise industry cannot control the spread of COVID without its restrictions. Florida, Florida’s health experts, and the cruise industry have absolutely no idea how to prevent transmission of COVID-19, right? Only the CDC can do that!

The fight between Florida and the CDC began in April. Florida Gov. Ron DeSanti sued the CDC in the U.S. District Court for the Middle District of Florida after the CDC issued a “no sail” order.

On Wednesday, Merryday made it official by denying the CDC’s request to keep its COVID restrictions on cruises out of Florida.:

Merryday slammed the CDC for not trusting Florida’s health experts or the cruise lines. But Merryday has a major problem with government overreach (emphasis mine):

In this instance, CDC’s argument fails for the reasons elaborated in the preliminary injunction to show a likelihood of success on appeal, and CDC fails to demonstrate that denial of the stay will injure materially CDC or the United States, any third party, or the public. Although CDC invariably garnishes the argument with dire prospects of “transmission” of COVID-19 aboard a cruise vessel, these dark allusions dismiss state and local health authorities, the industry’s self-regulation, and the thorough and costly preparations and accommodations by all concerned to avoid “transmission” and to confine and control the “transmission,” if one occurs. In other words, CDC can show no factor that outweighs the need to conclude an unwarranted and unprecedented exercise of governmental power. More to the point, this action is not about what health precautions against COVID-19 are necessary or helpful aboard a cruise ship; this action is about the use and misuse of governmental power.

The cruise industry is a major driver of Florida’s economy. The CDC shut down cruises in March 2020. Officials then provided the cruise companies “a strict phased approach to reopening.”

DeSantis said his “lawsuit is necessary to protect Floridians from the federal government’s overreach and resulting economic harm to our state.”

But you cannot tell the government no. The CDC immediately requested the 11th U.S. Circuit Court of Appeals to put Merryday’s ruling on hold:

But in asking the appeals court to issue the stay, U.S. Department of Justice attorneys representing the CDC wrote that Merryday’s preliminary injunction “rests on errors of law and is a clear abuse of the district court’s discretion.” It also argued that the injunction will “exacerbate the spread of COVID-19.”

“The district court had no basis to substitute its view (or Florida’s view) that the CDC’s protocols can safely be lifted for the contrary determination made by the expert public health agency in consultation with the cruise ship industry and squarely within its traditional authority,” the request to the appeals court said. “These protocols appropriately balance public health concerns with the shared desire to resume passenger cruises — as is amply demonstrated by the fact that the cruise lines (which have not appeared in this litigation) are well underway in implementing the conditional sailing order and already are, or soon will be, resuming passenger cruises.”

Authorities only have the power that they seize unchallenged. Along with Pelosi’s use of Capitol Police outside of DC as the first legislative police force independent from the executive branch, the marxists are exhibiting their total disregard for the limits placed on government by the Constitution.

There has been one notable exception: When Hillary was elected to the Senate, she was a protectee of the Secret Service and the Capitol complex isn’t their turf. They and the USCP negotiated how her details were going to work. They agreed that if she was on the clock, it was the USCP. If she was off the clock, it was the SS. When she became Secretary of State, the Diplomatic Security Service and the SS followed the same policy. Now she’s living out her days with the Secret Service.

As for the cruises, it’s interesting that Congress worked to allow cruises from San Francisco and Seattle to Alaska to start back up, but Florida has to fight in court. Perhaps it’s because the delegations from CA and WA are majority Democrat?

The Capitol Police have no justification for extending outside the federal triangle, any more than TSA has authority to perform crotch-checks in Greyhound stations.

Is any organization fighting this power grab? How can we help them?

State and district offices. If something happens at one of those places, vandalism for example, local law enforcement will be dealing with it first but the Capitol Police will be getting involved in the investigation.

So the Capital Police don’t trust the FBI either?

Police forces are traditionally under the control of the executive. Congress, however, has exclusive and plenary jurisdiction over the District of Columbia, granted it in the Constitution. Except for enumerated powers, that authority ends where the states begin. The Capitol Police should be constrained to operations solely within the District of Columbia. (Imagine that.) If intelligence concerning threats against federal officials is needed outside the District, there are the FBI and state & local police agencies to which such duties may be referred, police under the control of executive authorities. Congressional police should be tied strictly to the seat of Congress, which is nowhere else but the District of Columbia.

Because CDC’s record of being correct has been so sterling so far.

Any inside baseball experts here care to guess how the 11th Circuit is going to view this?

Nope. However Swain v Junior in the 11th Circuit from last May could shed some light. Covid related complaints by prisoners in Miami. Similar issues, is an injunction warranted and does the Trial CT record support it.

It ain’t precisely on point but does have some clues, at least for the three judge draw who heard Swain. Different draw, different results?

No prediction from me.

Liberal Playbook: Once you have power never let it go.

“Once you have their money, never give it back.”
The Ferengi would understand the modern “liberal.”

Glad I didn’t sell my Carnival stock this week.

Does the CDC really have the authority to forbid/safeguard industries?

They have done health inspections of cruise ships that dock in the U.S. for years.

The CDC claims that there is a federal quarantine power, which congress has exercised without challenge since 1796. The judge pointed out that this is not true; the 1796 law that established the CDC’s ultimate predecessor merely authorized federal officers to assist the states in exercising their quarantine powers, which come from their general police powers. The federal government has no police power.

Specifically, the CDC claims that 42 USC &section; 264(a) gives it the power to do pretty much whatever it thinks necessary to prevent disease from spreading:

“The Surgeon General, 28 with the approval of the Secretary, is authorized to make and enforce such regulations as in his judgment are necessary to prevent the introduction, transmission, or spread of communicable diseases from foreign countries into the States or possessions, or from one State or possession into any other State or possession. For purposes of carrying out and enforcing such regulations, the Surgeon General may provide for such inspection, fumigation, disinfection, sanitation, pest extermination, destruction of animals or articles found to be so infected or contaminated as to be sources of dangerous infection to human beings, and other measures, as in his judgment may be necessary.”

Florida argues, and the judge agreed, that that’s an outrageous overreading of the statute.

My job contract has “and other duties as assigned” in there. I guess that means my boss can make me do whatever he wants as a condition of my employment.

The CDC is a disease.

Once the heavy hand of government gets wrapped around your neck, it can take a crowbar to pry those greedy fingers away.

I think the CDC protests too much as it has absolutely no comment about the unfettered/untested influx of COVID 19 on our southern border— Not to mention the unleashing of other diseases on the US such as multi-drug resistant TB, etc.

Leftists will relinquish control very reluctantly. This is what they do. Control of everything, all the time. They know how to live your life better than you.

Remember, the CDC seized its control over the pandemic at a time when there were no vaccines and no medicines known to be effective in the treatment of COVID. This is no longer the case. People who have not been vaccinated are not concerned with the threat. People who are concerned can get (and probably mostly have been) vaccinated. People who are vaccinated and still afraid of COVID can take their own protective measures (which the CDC still insists actually work), like wearing a mask and avoiding crowds, esp. indoors. The situation is now nothing like that earlier, in which the CDC’s actions may have been justifiable (not that I think they were). Our governments have a very bad habit of doing questionable things for arguably good reasons, and then continuing to do those questionable things after the “good reasons” have evaporated and the arguments in favor of the actions are no longer supportable. The history of paper money in this country is a very good example of how government expands its authority in times of crisis, and then later continues to excuse the expansion by the mere fact that it was able to do something earlier, during an emergency, without regard for the fact that the emergency has passed.