When fascism comes to America it will look like Jen Psaki and will be carrying the DNC flag. 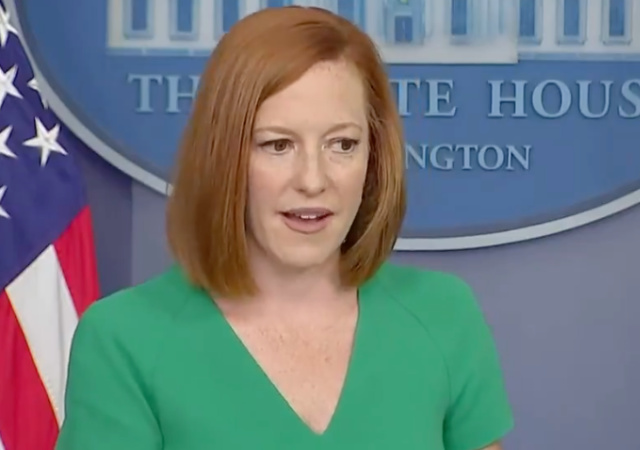 I thought I was transported back in time listening to Press Secretary Jen Psaki.

Psaki said all social media platforms should ban you if you spread misinformation on one outlet:

PSAKI: “You shouldn’t be banned from one platform and not others if you — for providing misinformation out there, taking faster action against harmful post. As you all know, information travels quite quickly. If it’s up there for days and days and days, when people see it, you know there’s — it’s hard to put that back in a box. And of course promoting algorithms. I don’t know how they work but they all do know how they work. So, those are some of the steps that we think could be constructive for public health, for public information, for public — you know, the right of the public to know.”

Jen Psaki just suggested that people spreading misinformation be banned from other/all platforms if they're banned from one. pic.twitter.com/SlNXJTXi0I

On Thursday, Psaki admitted the administration will collude with social media platforms about misinformation. Psaki double-downed on the comments on Friday:

PSAKI: “Sure. Well, I would say first, it should not come as any surprise that we are in regular touch with social media platforms, just like we’re in regular touch with all of you and your media outlets about areas where we have concern, information that might be useful — information that may or may not be interesting to your viewers. You all make decisions just like the social media platforms make decisions.”

Press Secretary Psaki: "It shouldn't come as a surprise that we're in touch with social media, just like we're in regular touch with all of you and your media outlets about areas where we have concern." pic.twitter.com/XHLrPmEArm

PSAKI: “Clearly not, because we’re talking about additional steps that should be taken, and frankly, information that media organizations could decide whether you’re going to report on or not. I’m not talking just about the misinformation storyline, I’m talking about these individuals, I’m talking about how prevalent the spreading of this information is. The public has a right to know. That’s the point that we’re making, and we’re dealing with a life-or-death issue here. And so, everybody has a role to play in making sure there is accurate information. Obviously, those are steps they have taken. They are a private sector company, they’re going to make decisions about additional steps they can take. It’s clear there are more that can be taken. And actually, just on the foreign government piece, because I think that’s an important point — important, interesting question. The State Department’s Global Engagement Center has found that Russia and China have promoted their own vaccines through messaging that undermines Western origin vaccines and health development programs.”

Psaki says Facebook is not doing enough to eliminate "misinformation" from its platform. pic.twitter.com/TvbF7aE4ia

“Fox News journalist Peter Ducey asked the regime to name the 12 people on Facebook the White House has identified as problematic for the interests of the state; however, the spokesperson refused to name them, obviously and transparently fearing a lawsuit.”

“The legal authority for the White House to conduct social media surveillance, and then identify the speech of a dozen Americans they dislike; and then request Big Tech to target those voices, is a brutally obvious first amendment issue.”

Who can sue? Who will have standing? Are we helpless?

Standing is not gonna solve this problem. It’s going to take prone. Preferably with a bipod.

That took me a minute to figure out.. but hear, hear!!! TY

Absolutely!
It took guns to gain our freedom and it won’t take a bullet to keep it, but the threat of it scares them to death. Reference how scared they seem about Jan 6

not exactly mainstream media or medical people from what I can tell.

The administration is just admitting to what they did with Trump. This is not new, it has been going on for a long time.

“As you all know, information travels quite quickly. If it’s up there for days and days and days, when people see it, you know there’s — it’s hard to put that back in a box.”

Exactly. Like the heinous fire extinguisher death of officer Sicknick. Or the fact that Hunter Biden’s laptop was filled with Russian disinformation. Or that January 6 was an (unarmed) insurrection.

I suggest the White House immediately be banned from every form of public media, including TV networks.

So the WH position is that ‘misinformation’ offered in one venue should result in the removal/banning of that person from all venues?

Good to know. Now do Biden ‘if you don’t vote for me y’all ain’t black’. Are we to understand that the 19% of black, males who cast votes for DJT are not in fact black?

How about Biden’s repeated claims that he had no knowledge about his son’s Hunter Biden’s business partners? He posed for photos with some of them in the WH.

How about Biden’s claims that the border surge is in hand? Apprehension numbers for June show not only an increase over June 2020 but an increase over May of 2021. Which sustains the increase each month since Biden’s inauguration.

Will Psaki cancel herself since she has peddled this misinformation? Will she cancel Biden?

This Orwellian crap is sad. The WH needs a grown up to walk this back and monitor the excesses of these children before they push the American People too far one too many times.

After the bannings comes ‘reeducation’. During a stay in the new American Gulag

Psaki is a PR hack, even journalists know that PR hacks a POS.

What she’s supplying is disinformation.

And why should they care. They know perfectly well by now that nothing will be done no matter what they do. We’ll get the usual howls of outrage from some Republicans pretending they care and then . . . nothing

Didn’t these people take an oath to uphold the Constitution?

A core tenet of leftism is the abandonment of personal honor.

The Soviet Union had its Tass and Pravda. The Biden Junta seems to have its social media allies.

Outside of a movie or a newsreel, I’ve never seen someone so happy to represent evil.

Only in clown world is the public’s “right to know” dependent upon the speed and efficiency with which information and opinion can be suppressed and denied an outlet.

Thumbs down by mistake

OK OK, I know this is a wild and crazy idea but how about, if the White House feels there is misinformation out there, they just publish what they think is the correct information … and then let the people decide what to believe.

Oh wait, what Democrat would do THAT?

Lydon LaRouche. And look where it got him. Precisely where he deserved to be.

These corporations, the media, the “deep state”, much of the government and the Democrat Party are the same entity in my opinion

Didn’t we just spend the last four years listening to the left screech FASCISM!!!!? Truly surreal times. I predict this will end in a bloodbath. And the progs won’t be happy with the results.

To use Viva Frei’s phrase: confession through projection.

“Golly gee, Wally…….they sure are sore about 2016. Do ya think it’s because Trump beat their cheating scheme and kept a Clinton out of office?”

Setting the stage for government censorship via businesses operating as its agents for the following thought crimes and wrongthink and hate speech ‘violence’.

Comrade Biden is right about one thing, but not in the way he thinks. Our Constitution, our ‘precious democracy’, and our freedoms are under the greatest threat since the Civil War. He and his admin are that threat. He and his admin are radical leftwing totalitarian authoritarian fascists.

This is truly authoritarian. By god, these people are doing everything the screamed Trump was going to do(but never did);

I believe the definition of “misinformation” being used here is not “anything that isn’t true”, but rather “anything we don’t like”.

Just imagine the histrionics and outrage that the vile and hypocritical Dhimmi-crats would have evinced, had President Trump ever proposed something such as this obnoxiously totalitarian and Orwellian proposal (assuming that any Trump-hating tech company actually would have cooperated with him). We’d have never heard the end of how President Trump was a fascist, a dictator; etc., etc.

But, somehow, this type of totalitarian proposal is deemed to be okay, when a Dhimmi-crat proposes it. That’s why the Dhimmi-crats’ capriciously selective outrage and totally malleable morality expose them as transparently self-serving, greasy and brazen hypocrites.

And, we all know that the Dhimmi-crats’ definition of “misinformation,” or, “fake news,” etc., etc., is merely a fig leaf to silence and to stifle dissenting/conservative voices and opinions — indeed, to stifle any form of expression that rejects/diverges from the Dhimmi-crat Party orthodoxies and the propaganda narratives that are parroted/promoted by their slavish media prostitute-lackeys.

social media is a teammate of government (and I’m not excluding Republicans). big media is on the team too. they hire and have family working in both media and government. Add in the IC and that’s our current situation. One big happy family except for the public who is not in the club.

A working definition: something that promotes an outcome that someone in power opposes. Example: Fauci lies about something, justifying that the lie, if believed, will aid the spread of disease (i.e., “it’s for the public good”). Anyone who points out that what Fauci said was not true would therefore be spreading “misinformation.” Especially if what Fauci said was, in fact, not true.

And, similarly, for anyone who makes fact-based, logical arguments against any currently fashionable political dogma: if the consequence of that speech does not promote the dogma then it is, ipso facto, “misinformation.”

Any working definition of “misinformation” can only be based on “cui bono.” And far from empowering those without access to power, can only be implemented by those with the power to suppress the speech of others.

For arguments against free speech are almost always justified by “it’s for the public good” And come down to, “who decides”?

Two frogs are bathing. One frog says to the other, “Is it me, or is this water getting extremely warm and do you notice that it’s getting harder to jump?”