The state’s wildfire season is off to a hot start while news recently broke that a hacker tried to poison a water treatment plant that served Bay Area. 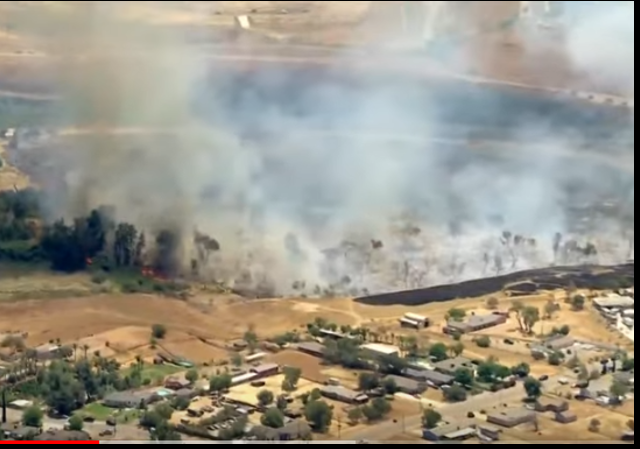 There are three major deserts in California: the Mojave Desert, the Colorado Desert, and the Great Basin Desert.

There once was a time when the infrastructure was such that the state had enough power and water to last through the summer heat. Sadly, those days have clearly ended.

To begin with, Governor Gavin Newsom is calling upon residents to voluntarily cut back on their water consumption by 15 percent as we are experiencing another heat wave.

Newsom, a Democrat who faces a recall election in September, expanded a regional drought state of emergency to 50 of California’s 58 counties, home to about 42 percent of the population.

Large counties like Los Angeles, San Diego and San Francisco are not included in the emergency proclamation.

“We’re hopeful that people will take that mindset they brought into the last drought and extend that forward with a 15 percent voluntary reduction, not only on residences but industrial commercial operations and agricultural operations,” Newsom told reporters in San Luis Obispo County.

Likely that tactic will be changed to penalizing water consumption should Newsom survive the recall challenge. However, Newsom will have to address a recent security threat to a key water supply. It has recently been revealed that in January, a hacker tried to poison a water treatment plant that served parts of the San Francisco Bay Area.

The hacker had the username and password for a former employee’s TeamViewer account, a popular program that lets users remotely control their computers, according to a private report compiled by the Northern California Regional Intelligence Center in February and seen by NBC News.

After logging in, the hacker, whose name and motive are unknown and who hasn’t been identified by law enforcement, deleted programs that the water plant used to treat drinking water.

Of course, it wouldn’t be a summer in California without brownouts and blackouts. As extreme heat slams California, the state’s power grid operator issued a new warning morning due to continued strain on the power grid.

A Southern Oregon wildfire is threatening transmission lines used to import energy to California, according to the system conditions bulletin issued by the California Independent System Operator (Cal ISO).

That threat, along with the heat, is putting new stress on the grid. Saturday’s warning allows the Cal ISO to activate emergency demand response programs including rolling blackouts, if needed.

This comes after the Cal ISO issued a Flex Alert for Friday calling on residents to conserve energy to release stress on the grid. Cal ISO said the Flex Alert will remain in place from 4 p.m. to 9 p.m.

Finally, the state’s fire season has started off in a big way.

The Tennant Fire burned 10,580 acres since it started on June 28 and is 91 percent contained, the US forest service said on Friday.

While the Tennant Fire is nearly under control, firefighters are dealing with a roaring wildfire that’s forcing evacuations across state lines into Nevada this weekend as the region braces for ‘dangerously hot’ weather – with the mercury set to hit a searing 117F across much of Southern California’s inland areas.

National Weather Service Officials have issued an excessive heat warning for much of the Golden State, which is in place until Monday.

And while Newsom may now be following the advice of President Donald Trump by removing brush and funding forest and woodland maintenance, it may be too late to spare the state this year.

Perhaps a summer of these failures will inspire California voters to opt for real infrastructure funding plans, rather than social justice activism dressed up as infrastructure, when they cast their ballot in September’s recall election.

I blame it on too much power generation. ʘ ᴗ ʘ

That can’t be true. After the disasters of the last 4 years I am sure CA must of added more water storage and built some natural gas power plants…..Oh wait…CA not only did not add a single gallon of storage, it closed 2 huge natural gas power plants.
…
Ironically, Sacramento gets its power from hydro and natural gas, because it is served by a community owned electrical company, beyond the easy reach of the idiot governor who is a customer.

Yep. It’s kind of hard to mess that up too much. Then again, it is California

Blame Climate Change because who could have predicted that the weather would either be flood or drought in California like it has always been.

Elect more Democrats or maybe Socialist not afraid to say that is what they are.

Meanwhile, accelerate plans to permanently shutdown the nuclear plant that is your single largest source of carbon free power. Take another 10% off the top of your power grid.

Don’t worry! The Glorious Leaders of the People’s Democratic Republic of California are focused laser-like on the important stuff!

Like keeping the mask mandate in schools for eternity. And I am sure there is a crack state government commission looking into the huge problem of the proles using the wrong pronouns.

Meanwhile, in the poor, unenlightened Southeast, we have plenty of electricity, plenty of water, and plenty of poor, ignorant rednecks with common sense. The Left Coast states, lacking all of these, seem to be having problems.
.