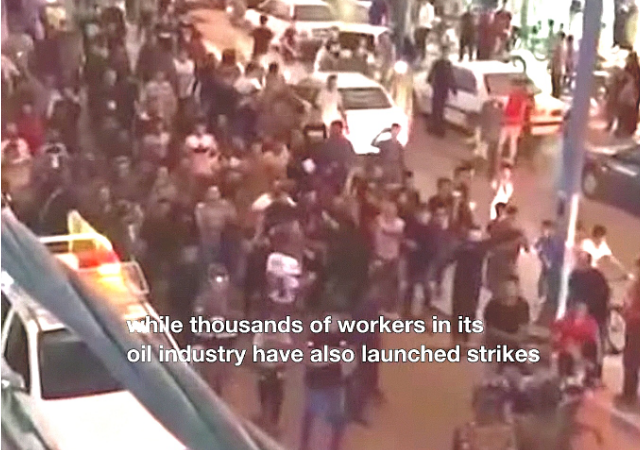 While the Iranian regime is shooting at people protesting water scarcity in the western part of the country — a crisis created by Tehran’s policy of diverting rivers away from the Arab majority region, the mainstream media are using the local drought to further their Climate Change agenda.

The protests, which began ten day ago in Iran’s Khuzestan province, have since spread to neighboring regions. Khuzestan is Iran’s main oil-producing region, but it is inhabited by the country’s Arab minority.

According to the New York Times, Iran’s “prolonged drought [has been] worsened by climate change.” In UK-based weekly Economist’s opinion, the Iranians are protesting because “climate change is causing longer dry seasons, as well as hotter heatwave.”

“A long-simmering factor in Iran protests: climate change,” was the LA Times verdict.

Even purportedly scientific publications didn’t shy away from getting on the ‘Climate’ band wagon. “The impacts of climate change are among the environmental challenges facing Iran that helped spark protests in dozens of cities across the Islamic republic,” the magazine Scientific American claimed.

Does this newspaper have an editor?
ِReducing the significance of the government's role in destroying water resources by mentioning drought/climate change first is absurd. This regime created this man-made drought. No talk of #IRGC's projects that destroyed Khuzestan's resources. https://t.co/jSy7FtOAee

Regardless of the media spin, the Arabs residents of the region, mostly dependent of farming, are not protesting Climate Change, but the Mullah regime’s massive projects that have diverted their rivers to other parts of Iran.

The videos of the protests show people chanting  “Death to Khamenei” and “Reza Shah, bless your soul” — in memory of the Persian king who was ousted by the Mullahs in 1979.

The regime is using deadly force against the demonstrators and has disrupted internet services to stop the protests from spreading. Eight people have reportedly been killed in the clampdown so far, but the actual figure could be much higher given Tehran’s blackout of the internet and cell phone communication coming from the region.

In the latest wave of demonstrations, people in dozens of towns and cities in Khuzestan, an oil-rich province that has a large ethnic Arab population, have taken to the streets every evening since July 15.

The protest movement has spread to other provinces, with video posted on social media purportedly showing street rallies taking place late on July 22 in Lorestan Province, Isfahan in the center of Iran, and Bushehr to the south.

In videos shared on social media over the past days, demonstrators can be seen blocking roads and chanting slogans against the country’s theocratic government and its head, Supreme Leader Ayatollah Ali Khamenei, as security forces try to disperse crowds with tear gas. In some videos, what appears to be the sound of gunfire can be heard.

There is no doubt over the Mullah regime’s role in devastating the ecology and water supply of Khuzestan region, which is home to the  country’s Arab minority and has been the center of many anti-regime protests over the years. “The building of dams and diversions on rivers of the region to other parts of Iran has caused this water scarcity and resulted in a catastrophic drought at a time when the summer heat is rising above 50 °C [122°F],” the Vienna-based Middle Eastern think tank Mena-Watch reported.

Iran’s policy of creating massive dams and diverting river water is well-documented. The regime has weaponized this strategy against neighboring Iraq as well. “According to Iraqi sources, at least 42 rivers and springs of water from Iran have been diverted by the Iranians, causing a migration of Iraqis from the water-stricken areas,” the Israeli think tanks Jerusalem Center for Public Affairs (JCPA) noted as early as 2018.

These fools did not even enlarge or deepen the shrunken reservoirs during the last 3 droughts, a partial solution so obvious that the failure to do so boggles the mind. Reservoir dry….dig into the dry edges and use the soil elsewhere.

For centuries, politicians blamed “God’s anger” for the consequences of being unprepared for droughts, storms, earthquakes, etc to avoid the blame for their incompetence. Now they blame “climate change.”

Every time Newsom or some other politician blames “climate change” to avoid blame for their own misdeeds, I wonder why the media don’t ask them “Where have you been for the last decade? Why haven’t you prepared the state for this climate change?”

Iran builds a dam and diverts the water away from the Arab population to the Persian population. Arabs are disliked by all of the other ethnic groups of the region.

It’s not climate change, but if it was than why isn’t the MSM all over the Nord Stream 2 deal? Billions of cubic meters of nat gas to be burned and not a peep. Rhetorical I know.

Nord Stream 2 transports a hydrocarbon fuel, not “fossil fuels”. It’s a semantic game, a double-edged scalpel, that they like to play with when it deemed to be politically congruent (e.g. profitable, exploitable).

The MSM are fools and suckers for hucksters. This issue has been reported on for nearly a decade. A great deal of the problem is infrastructure. The ancient delivery systems via tunnels and ditches has fallen into disrepair as religious fanatics divert such money to terror goals. The pipage emplaced by the Shah is showing its age. The incompetence of religious politicians matches in every respect those of the Democratic Party. Corrupt bumblers.

Amazon has been running a TV commercial using children (not old enough to have a clue) trying to guilt everybody about leaving the Paris accords. I guess the part that really pissses me off is that a bunch of tree hugging Marxist teachers are indoctrinating the students with this junk science.

When a regime is totalitarian, they are responsible for everything bad that happens, which always far outweighs any good that they do.