Meanwhile, Australia may be rethinking its pursuit of ‘Covid Zero’. 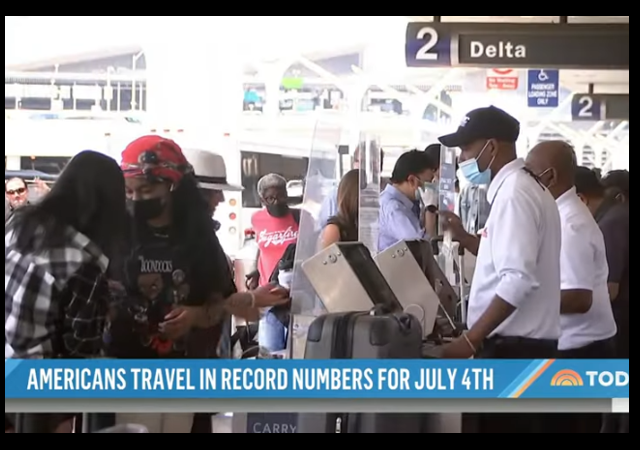 The political manipulation of the COVID-19 response, including the continued irrational reporting on the coronavirus by the nation’s press, has led Americans to make some significant decisions about how to spend their summer vacation.

We are choosing travel and liberty rather than panic over the Delta-variant panic that is the big, scary featured item in recent news on the pandemic. U.S. air travel has exceeded pre-pandemic levels since the “flatten the curve” national closer was instituted, with at least 44 million people expected to hit the roads this July 4th weekend.

Almost 2.15 million people passed through US airport screening checkpoints Thursday, according to the Transportation Security Administration.

This dwarfs the 58,330 recorded on the same day in 2019 and marks the second highest figure on record since COVID-19 started ravaging America, after a record 2.17 million flew four days earlier.

While Americans celebrate Independence Day and the nation’s increasing independence from the virus and COVID-19 restrictions with cookouts, fireworks, concerts and beach outings, the US is now witnessing a rise in cases of the Delta variant.

More than 30 percent of adults are still not vaccinated and officials are concerned about large numbers of vaccinated and unvaccinated Americans mixing, with Joe Biden warning that ‘lives will be lost’ because of people who didn’t get the shot.

Clearly, the nation is unwilling to continue the liberty-crushing restrictions experienced last summer (except for those engaged in BLM/antifa protests and rioting), no matter what strain of the virus is circulating.

Joel Zinberg, M.D., a senior fellow at the Competitive Enterprise Institute, notes that there are plenty of reasons not to panic about the Delta variant. Chief among the reasons to ignore the current media hysteria is that the vaccines are effective against the variants.

Surprisingly, the most reasonable response to Delta has come from the normally ultra-cautious US Centers for Disease Control and Prevention. Even though the Delta variant has become the most common strain circulating in the United States, CDC Director Rochelle Walenksy said that vaccinated people needn’t wear masks, since the vaccines are effective against all the variants, including Delta.

Scientific evidence backs this up: COVID-19 vaccines are highly effective in general and against Delta, as well. A just-published study in the New England Journal of Medicine, focusing on a population of health-care and other front-line workers, confirmed earlier reports that two doses of the Moderna and Pfizer vaccines were 91 percent effective in preventing infection; a single vaccine dose was 81 percent effective.

Additionally, Zinberg notes that in this country the Delta variant will cause localized outbreaks in areas where vaccination rates remain low. Furthermore, these outbreaks will be concentrated among younger people who are far less likely to become severely ill or die.

Three days after the emergence of a rare Covid-19 case in Sydney, around 40 friends gathered for a birthday party. Along with cake and laughter, there was a hidden threat: One of the guests had unknowingly crossed paths with that single Covid case, an airport driver who had caught the Delta variant from an American aircrew.

Two weeks later, 27 people from the party have tested positive, including a 2-year-old child, along with 14 close contacts. And the seven people at the gathering who were not infected? They were all vaccinated.

…For Australia and every other nation pursuing a so-called “Covid zero” approach, including China and New Zealand, the gathering in western Sydney amounts to a warning: Absent blanket vaccinations, the fortress cannot hold without ever more painful restrictions.

“This is the beginning of the end of Covid zero” said Catherine Bennett, the chair of epidemiology at Deakin University in Melbourne. “We may be able to get it under control this time, but it’s just going to be harder and harder.”

The Delta mutation has already raced from Sydney across Australia, carried on flights and by people visiting schools, hospitals, hair salons and a mass vaccination hub. Half of the country’s 25 million people have been ordered to stay home as the caseload, now at around 200, grows every day. State borders are closed, and exasperation — another lockdown 16 months into the pandemic? — is intensifying.

Truly, countries cannot continue to endure prolonged restrictions without significant consequences on their economies and their peoples. Hopefully, significant lessons have been learned during our response to this virus, inasmuch as the Chinese are planning to build 25 to 30 more high-level biological laboratories similar to the one in Wuhan (the likely epicenter of this pandemic).

Data from NHS indicates that it is a highly infectious mutation. However, individuals who are fully vaccinated are 6x more likely to suffer an adverse event, including death.

Wait! People are getting on with their lives instead of cowering in fear? Is that even allowed?

We chose travel and freedom and Southwest took it away by cancelling three flights. Vacation abandoned.

I just picked someone up from the Orlando International Airport. There are no parking spaces available in their parking garages. Those parking spaces would be almost entirely used by departures. Arrivals must be ginormous.

Freedom in Florida is a magnet.

How close are the Health Overlords to jumping the shark? More and more dire predictions of horrendous doom must be predicted for control (read manuplication) of the masses. Self determination and independence will be stifled, at any cost

Our Islands of Langerhands will be completely submerged and polar bears will be swimming in our lungs by 2022.

Oh no! Whatever shall we do? Shall we save the polar bears or save our lungs?

Interesting piece of disinformation, given that we now know that (1) the “vaccines” don’t prevent you from catching COVID, (2) they also don’t prevent you from transmitting it, (3) they’re no more effective in alleviating the symptoms than several generic drugs (none of which have anything like the severity of the side effects and all of which have been time-tested), (4) the adverse reaction rate and severity, including death, especially for younger people. is far higher from the “vaccine” than from the virus, (5) that the spike protein created by the “vaccine” is not acting the way the manufacturers expected, which means that (6) NOBODY has any real understanding of the long term effects of inducing a relatively untested mRNA compound into the human body, and (7) no matter what those effects are, the drug companies will take their billions in profits and go merrily on their way, because they’re not going to be held responsible.

If it should happen that I catch COVID (although I’ve done my best to catch it over the past year+ apparently without success) and pass on, that’s the breaks – I’ll sue the Chinese from the afterlife. But there’s no way in hell I’m going to try to hasten the process by acting as a guinea pig for Moderna or Pfizer.

I bet you did get it and were asymptomatic. Congratulations on your updated immunity.

Last week, a family friend of ours (46) suddenly dropped dead of “heart-related issues” shortly after getting the jab.

Britain’s active cases has quadrupled in a month because of Delta, however hospitalizations and covid related deaths are the lowest in a year. Oh. And in 2 separate trials the J&J inoculation has proven highly effective in dealing with the corona virus.

My opinion is “been there done that”.

Delta variant symptoms, in people showing any symptoms at all, are equivalent to hay fever. Mortality is equivalent to ordinary seasonal flu.

For the most part only ‘extremist far right propaganda’ media publishes these facts — AKA the truth.

I wouldn’t call being masked for 4-8 hours “travel and freedom”. I’m not setting foot in an airport until this mask madness has ended.

Agree. I didn’t realize that they were still requiring masks. Ugh.

And let’s not forget that fateful super-spreader event last year on Mt. Rushmore! Oh yeah. it never happened no matter how much the media wanted it to.