“​Taliban fighters can be seen … celebrating the seizure of US Humvees, tanks and assault weapons from Afghan security forces.” 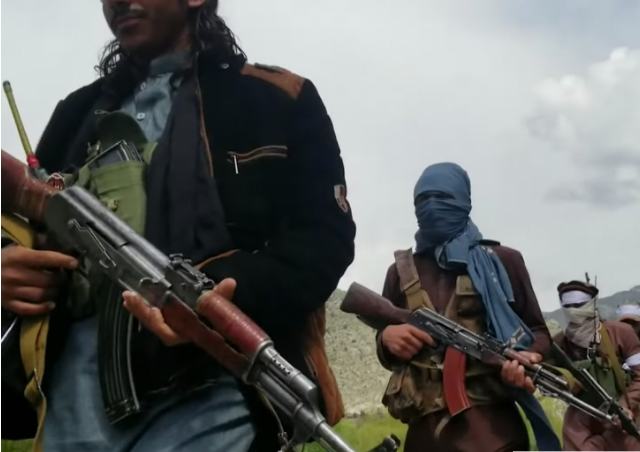 The Afghan military appears to be retreating as the Taliban capture key districts in the country’s north amid U.S. troop withdrawal. With the Islamist militia launching a major offensive to retake the country after two decades, soldiers of the Afghan National Army are deserting their positions — leaving their arms and equipment behind.

“​Taliban fighters can be seen in recently released video​s​ celebrating the seizure of US Humvees, tanks and assault weapons from Afghan security forces,” The New York Post reported Tuesday. The painful scenes are reminiscent of the collapse of the Iraqi Army in the face of the Islamic State’s advance in early 2014.

Instead of defending their homes, some Afghan soldiers in the north sought shelter in neighboring Tajikistan. “Nearly 1,000 Afghan soldiers have fled the Taliban advances by crossing the border into Tajikistan,” the EuroNews reported.

After a U.S.-led military campaign drove out the Taliban 20 years ago, they have taken back control of a third of the country’s nearly 400 districts, the BBC reported.

The Taliban offensive gathers strength as most of the U.S. and allied forces have left the country ahead of the September 11 deadline set by the Biden White House. “The Taliban surge came as U.S. Central Command in a statement Tuesday said 90% of the withdrawal of U.S. troops and equipment is complete,” the Associated Press confirmed on Tuesday.

Regional officials in northern Afghanistan said on Wednesday they had recaptured government buildings in a provincial capital after Taliban fighters stormed it overnight, taking over the police headquarters and sparking panic among residents.

Officials said air strikes were being carried out and special forces had been deployed to push the Taliban fighters back, after the latest dramatic advance by fighters surging across the country as Washington pulls out its last troops. (…)

Taliban gains have been especially dramatic in northern provinces where they had long been kept at bay.

Provincial governor Husamuddin Shams told Reuters the Taliban had attacked the city of Qala-e-Naw from three directions in the morning and Afghan security forces were fighting them back.

The Taliban gains have not been haphazard. It appears they have a strategic plan to oust the Kabul-based Afghan government. “The areas under Taliban control in the north are increasingly strategic, running along Afghanistan’s border with central Asian states. Last month the religious movement took control of Imam Sahib, a town in Kunduz province opposite Uzbekistan and gained control of a key trade route.” the AP reported.

The Islamist terror militia made no secret of its intention to return Afghanistan to a jihad-professing Islamic state. “The Taliban spokesman described the current government as ‘moribund’ and referred to the country as the ‘Islamic emirate’ – an indication that the group envisaged a theocratic basis for governing the country and were unlikely to agree to Afghan government demands for elections,” The BBC reported Monday.

If the Taliban manage to secure a foothold in Afghanistan, they will again unleash the Sharia-sanctioned bloodshed and repression on the Afghan population. The global jihad, which lost its base of operation in ISIS-held Syria and northern Iraq under President Donald Trump’s watch, will regain a bridgehead from which to export Islamic terrorism worldwide.

“Winning” and how to do it were never a consideration when we entered. As with Iraq, all for nothing.

the defense contractors got paid

That’s what happens when a bunch of woke idiots are more concerned with hurting feelings than actually winning.

When idiots are more concerned with propping up a laughably corrupt, incompetent ‘government’ because MUH DEMOCRACY.

20 fucking years and they couldn’t last 6 fucking months without us.

Did anyone not see th is coming?

America has to cure itself of this nonsense of nation building.

People always point to Germany and Japan at the end of WWII but they forget that both countries had functioning governments with voting before the war. There was a history there that the allies could build on to bring both countries back to a normal state.

At the same time both countries were massively occupied by the Allied Armies who were more than willing to raze a city to the ground if need be.

And both countries were not in the grips of a fanatical religion called Islam. Japan certainly behaved in a fanatical way especially towards the end but that wasn’t religion as much as it was culture. When the Emperor said stop and surrender everyone stopped.

No more nation building. Just go in to a place and hit what you want and than leave.

The people in Afghanistan clearly do not want what we would call a democratic nation. Pull out the Afghans who helped us and are in danger and let the rest rot.

they have been fighting among themselves and outsiders for centuries, it is in their culture to just wait them out. 20 years is nothing and even if you add the Russian years it is still nothing in a relative sense.

Yet another war the Pentagon has lost. Twenty years and thousands of soldiers dead, and the Taliban will soon be stronger than it was on 9/10/2001. The supposedly greatest military in history keeps its 7 decade losing streak alive.

But at least the US military can boast of its drag queen shows, senior officers in solidarity with the holy BLM brownshirts, and a snarky Twitter battle with Tucker Carlson. Of course, don’t forget all those trillions we spent on jets, tanks, bombs and guns, which will soon be used to obliterate nests of dangerous white supremacists such as the Tuesday morning ladies’ Bible study. Perhaps by blowing a group of silver-haired grannies to smithereens maybe the woke admirals and generals at the Pentagon have finally a war it can win.

They are no longer soldiers. There is no more Afghan army.

Did they leave their women and children behind? Not very good in my opinion.

“​Taliban fighters can be seen in recently released video​s​ celebrating the seizure of US Humvees, tanks and assault weapons from Afghan security forces”

I expect that kind of ‘reporting’ from the NY “Marx Was Right” Times. You’d think reporters at the NY Post might know better.

If we aren’t going to give the Afghan armies the weapons and we aren’t bringing them back, why not destroy them rather than let them fall into enemy hands?

The NY Times probably reported them as an “a salt rifle”.

Why is the Taiban so much tougher than the regular Afghan army?

Aren’t both sides made up of people from the same area ?

Barky must be patting himself on the back

The Taliban is backed by China and Russia. The regular Afghan army is weak, because the populace is primitive politically, and there exists no ‘strongman’ to coalese the populace. Forget freedom in places like this.

On the other hand, the Taliban is like the mindset of black lives matters/antifa: loot, steal, kill – all the fun a goon can have without working. And if you’re a very good goon, you get to do a little raping here and there. Work hard enough, and you get a piece of the action.

Lazy complacent and apathetic people have no right to complain – they get what they get.

If today’s sheeple were around in the 1770’s, this country would still be under British rule.

Except the women and children have no
Voice what so ever

I read George MacDonald Fraser’s Flashman in 1969. Everything that has happened in that country since the Soviet invasion was foretold in that novel. At least the British were at risk in the first Afghan War (McNaghten and Sekundar Barnes come to mind) – here the grandees walked and the defense contractors got paid.

Inevitable … I feel sorry for the Afghan people … I can’t imagine living in that hell hole … but we aren’t responsible for the society they created … and we can’t stay there forever.

We should never have been there in the first place, so I don’t give a damn about it. Pulling the troops from there is the only thing the pedophile-in-chief has done that I’ve agreed with, probably because it’s the only thing he didn’t reverse from a REAL, legitimately elected president.

I don’t know about that. Remember, 9/11 came out of that place, while bin Laden was running the show. We probably should have nuked bin Laden’s town, and have been done with it.

Vijeta, IMO as disabled combat veteran who spent a great deal of time in the various sand boxes, you have described the situation quite well.

The remainder of the world, with the exception of Britain, Australia and New Zealand, made little more than token troop commitments, demanded their troops be assigned to the most docile sectors or both.

If this is a global v regional issue then surely the remaining Nations of the world will rise to the occasion by sending 100,000+ of their own troops to Afghanistan and deplete their Treasury by over $2 trillion dollars.

If they do so for the next twenty years then we can discuss whether the US will be willing to review it’s posture. Since we know they will not, then they can live with the consequences of their failure.

Thank you for your service and kind remarks. I was in Uzbekistan between 2003-4 working for the Germans and saw the situation first-hand. This is a personal tragedy to see this all over again.

The Russians learned their lesson, It was their Vietnam. We failed to learn. Thus we had a 2nd Vietnam.

It’s a great puzzle: what should we have done after the attacks of 9/11, if we didn’t attack the place the attackers were based? We should have nuked the area bin Laden controlled.

20 years and they never learned to defend themselves?

Fifty years, and generations of American families on welfare are still on it.