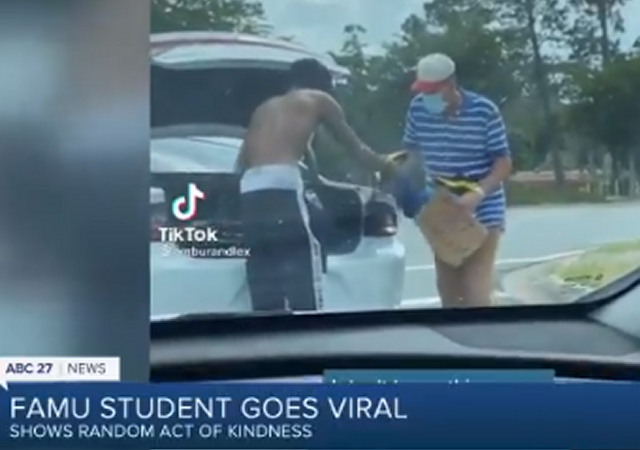 This is a great story. We could all use a lot more news about charity.

From the Insider via Yahoo News:

A Florida college student is being praised as a Good Samaritan for giving away his belongings to a homeless man along a roadside.

The student, identified as Jabari Richardson by WXTL, was filmed by TikTok user amburandlex as he opened the trunk of his vehicle along Interstate 10 and talked to a homeless man who held a sign that read, “Anything helps! God bless!”

Richardson then began handing his clothes and pairs of shoes to the homeless man before driving away.

The TikTok video was captioned: “I don’t know this young man but he deserves to go viral.”

As of Sunday, the 17-second video has gained more than 5.4 million views and 1.1 million likes. Users said the act of kindness gave them “goosebumps.”

“And he did this thinking no one was watching/recording … that’s how it’s done folk,” one person wrote.

HEARTWARMING: Jabari Richardson has been showing up on phone screens across the world in a now viral TikTok that has been seen over four million times. You can see Jabari get out of his car and hand a homeless man clothes and shoes (TikTok creds go to Amburandlex) @abc27 pic.twitter.com/EiH96tFdIP

Happening all over, where there are no cameras: there is a church in Bellview FL, St Theresa’s, i just read that has fed in May alone: 3,855 guest meals, 1652 food pantry guests & 532 covid-in-need food boxes, that doesn’t include the social services work with bills, assistance, etc…

And, they needed no 6-figure bureaucrat to show them how.

They’re everywhere, and they’re the most dangerous threat facing this country.

Maybe someone will give him a belt.

And check to see if the white car is reported stolen.