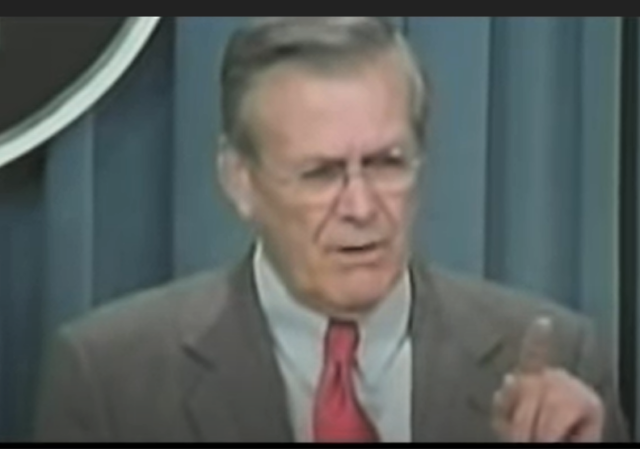 Former Secretary of Defense Donald Rumsfeld died today at age 88. The internet is a crapshow, as you can imagine.

I’ve written before about Rumsfeld’s most famous statement.

It’s a statement I’ve incorporated into my teaching because it lays out how to approach a case, interviewing witnesses, gathering evidence, and evaluating a case. Rumsfeld didn’t make the statement for legal purposes, but it’s applicable.

Most people focus on the “known known” wording. I focus on the “unknown unkowns,” the nagging fear that something important has been missed. The question you didn’t even think to ask, the thing so crazy it never entered your mind. The thing you didn’t see coming.

That’s what I obsess about, including at Legal Insurrection. I’m always worried about what I don’t know I don’t know. That’s why we are much more cautious than many outlets, and rarely win the race to hit the “publish” button.

The press mocked him mercilessly for those statements, although they make perfect sense. Even back in those days the press regularly demonstrated their lack of understanding and non-existent mental acumen.

My husband worked for Donald Runsfeld in between his two stints as Secretary of Defense. The company was cutting some corners, and Rumsfeld insisted on getting to the bottom of it and putting the company back on track. As part of the “cleanup crew”, my husband got to see how Rumsled worked. Many years later one of my girlfriends scored some tickets to a private showing of “Unknown Knowns”. She thought my husband would be fun to take along to get some “dirt” on Rumsfeld. She was shocked when my husband’s reaction to the film was Rumsfeld had the most integrity of any boss he had ever had. That completely ruined her evening.

He was a character

RIP sir your duty has ended

I always liked Rumsfeld for several reasons. He was typically the smartest man in the room or darn close. He would routinely work at his desk standing, no chair sitter. The referenced statement is a classic and the unknown unknowns is a lesson applicable to almost everything.

Rumsfeld endorsed trump for President as anyone that cared for our country would have done.

His great failing was not recognizing the election of 2020 was stolen. I don’t believe he signed the call for Trump to concede from malice however. Age dims even the intellect of the great.

RIP Sir, you have earned it.

He was already very ill when that statement was signed…. and that’s all I’m going to say about it.

If it wasn’t clear, I have forgiven him that.

“Age dims even the intellect”

Yep, something I am painfully aware of at my age.

Right there with you Justice…

May he find comfort in the arms of Angels…

Nearly as bad as unknown unknowns is unknown knowns (i.e. things you know, but have forgotten about or just overlooked the connection – classic “fell between the cracks”). They are not infrequently found in criminal investigations & intelligence.

I recall when he said that in response to a soldier’s question about up-armored vehicles. What the media left out was the question was fed to the soldier by a reporter for the Chattanooga Times Free Press. There was a lot of faux outrage about his answer but at the time, he was the only adult in the room and he gave an adult answer. Anyone who has been in the military can tell you all about scavenging and cannibalizing gear to get the job done. Maybe the reporter could have asked why so much money is funneled from the pentagon into off the books ops to the tune of trillions of dollars. That money the pentagon “loses” each year isn’t going into employee pockets, it’s funding something else but the media and congress are amazingly incurious about it.

This man was a legend.
He played with “journalists” like a marble.
Cut from other cloth.
🇺🇸

Seemed to me Donald Rumsfeld was interesting good character, quite possibly the smartest guy in a room.

I recall discussions about getting the French into the coalition and he responded that “going to war without the French is like going duck hunting without an accordion.”

One of a dwindling breed.
RIP

“If you can keep your head when all about you

are losing theirs, and blaming it on you….”

A hard-working grown-up is a blessing to our country.

Rumsfeld was the most consequential SECDEF since the architect of the Reagan buildup, Caspar Weinberger. He was brilliant, hard-working, and despised lazy reasoning, unprepared subordinates, imprecise language, and inefficient processes.

I was at Fort Riley for pre-deployment training and heard him speak at KSU in town the day after his resignation was announced, along with several hundred other soldiers headed to Iraq. He walked to the podium alone and immediately recognized by name a retired gentleman sitting near the front. I forgot his name but the reason why Rumsfeld called attention to him was immediately apparent: ” . . . Medal of Honor recipient.” It was a touching moment that showed humility in the presence of a true hero we see so infrequently in these times. The speech that followed was a succinct summary of the challenges facing America in the modern world without a syllable concerning his resignation. It was a speech by a man at the top of his game.

During the Q&A that followed, one man asked what got him through each day with the crap he was taking from all sides. “The opportunity to work with men and women like them,” pointing to us.

“Rumsfeld was the most consequential SECDEF since the architect of the Reagan buildup, Caspar Weinberger. He was brilliant, hard-working, and despised lazy reasoning, unprepared subordinates, imprecise language, and inefficient processes”

I am neutral towards Rumsfeld’s legacy and achievements. Some things he did well and others he did very poorly. I do think he was a man of integrity and was trying to the right thing. So you can quibble with his decisions here, or with those decisions there, but he was an honorable man who tried to serve his country well. With that, he can certainly be honored.

Frankly, I know of nothing Rumsfeld did poorly. It wasn’t in the mans character not to use 100% of his quite high ability in everything. You might disagree with something he did or didn’t do.