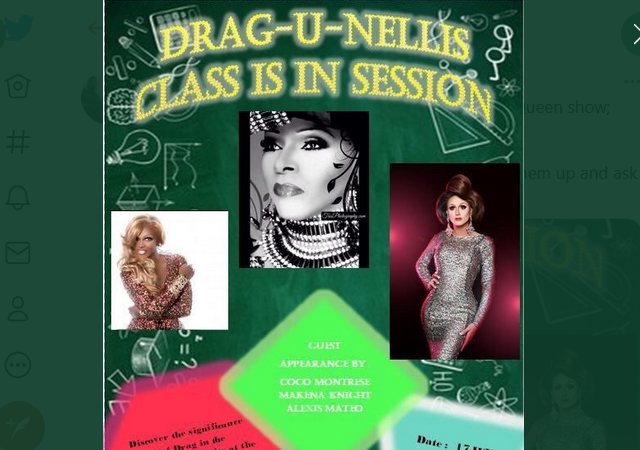 As China and Russia beef up their military, the current administration has focused on divisive Critical Race Theory and sensitivity training in the military. Just recently, a base held a Drag Queen show.

A U.S. Air Force base responded to controversy about a drag queen show hosted by the base by saying the performance was “essential to the morale, cohesion, and readiness of the military.”

Nellis AFB staged its first ever drag queen show on June 17th called ‘Drag-u-Nellis’ – which it said was important in teaching military personnel the “significance of Drag in the LGBT+ Community.”

After some veterans raised concerns about why such an event was being hosted, Nellis hit back with a statement defending the show.

I wonder how many of the airmen and service personnel were required to attend, under orders to develop “unit cohesion” or learn more “tolerance.”

I am not the only one currently questioning the priorities of the current military leadership that the Biden administration has installed.

So @NellisAFB is having a base-sanctioned drag Queen show; isn’t that awesome?

Maybe some of our military “journalists” can call them up and ask them about this. 🙄 pic.twitter.com/CJdGjpuun9

@NellisAFB just saw on Fox that Nellie sponsored a drag queen show. How FN embarrassing for all of us Air Force retirees! A travesty for the center of gravity for Air Force warfare.. I’m shocked ! Shame on the senior leaders who thought this was a good idea.

Last week, a contingent of Russian ships sailed off the coast of Hawaii. Reports indicate the vessel may have come between 23 and 35 miles from the state.

U.S. military officials now those vessels participating in a Russian naval exercise in international waters off Hawaii have begun to move away from the islands.

Capt. Mike Kafka, a U.S. Indo-Pacific Command spokesman, said the closest Russian ships were confirmed to have come within 20 to 30 nautical miles off Hawaii.

“We closely tracked all vessels,” he said.

“The Russian vessels are transiting west and are out of the Hawaii Operation Area. As part of our normal daily operations, we continue to track all vessels in the Indo-Pacific area of operations through maritime patrol aircraft, surface ship, and joint capabilities.”

However, Russian officials offered a different number in the official record.

The Russian ships’ proximity to the U.S. is at odds with a statement issued by the Kremlin’s Ministry of Defense on Monday, which said vessels from its Pacific fleet had been conducting major exercises around 2,500 miles southeast of the Kuril Islands. This would put them between 300 and 500 miles off the coast of Hawaii.

Kafka did not confirm which Russian vessels had been in the area, but the Ministry of Defense statement had said the Pacific fleet flagship Varyag, the destroyer Marshal Shaposhnikov and four corvettes were taking part in the drills.

The U.S. Navy spokesperson also declined to comment on whether any warnings had been issued to Russian vessels in the region, saying, “I am not going to get into our tactic and procedures,” according to The Drive. “I can say that we operate in accordance with international law and expect Russia to do the same.”

American fighter jets were twice in flight over Hawaii earlier this month as a precaution against Russian bombers training in the region, ABC News has learned.

A U.S. defense official told ABC News that F-22 Raptors were sent out on patrol from Joint Base Pearl Harbor-Hickam near Honolulu on June 13 and 18 due to a large-scale Russian military exercise taking place off the coast of Hawaii.

A second U.S. defense official told ABC News that the Russian bombers never even entered the air defense identification zone (ADIZ), an area in international airspace that serves as a buffer outside a country’s territorial airspace to give it time to intercept and vet any aircraft before it might reach sovereign territory.

Therefore, the F-22s never intercepted the Russian warplanes but rather were sent airborne mainly as a precaution in case they crossed into the ADIZ, which itself would have been a backstop against them entering U.S. territorial airspace.

Perhaps it is wiser for this country to no longer act as the “world’s policeman.” But did we have to turn into the “world’s drag queen?”

Klinger would have been so proud.

or upset that cross-dressing would no longer get you tossed out of the service. Who knows what he would try next?

I thought you had to leave the base for that and you could choose the tradition girls strip club if you wanted. Now the boys come to base in drag. WTH is going on.

This is a loooong way from South Pacific and “Honey Bun” also.

Preparing to go in harm’s way?

Cammo gear in many cities.

Thirty years from “don’t ask, don’t tell” to “get it shoved in your faces.”
Now, that’s Progress.

No, we’re past that now.

*sigh* I remember when Nellis was an actual military base. Now it appears that it has become a playground for mental defectives – and I don’t limit that comment to the drag queens.

General Milley appears to be one of the mental defectives.

Next month: a peso show and the banana lady from Okinawa. Whoo hoo! I feel ready already!!!

Looking at a drag queen makes young airmen feel ready and that’s good news because according to AF doctrine they have achieved a state of “readiness.”

If you were a patriotic young person considering either an enlistment or perhaps a career in the armed forces, would you be more or less likely after this? Or after the CJCS endorsing critical race theory and denigrating whites for their “rage”? Or after hearing the president threaten to nuke those who oppose the current regime?

Watch enlistments. Watch retirements and the number of those who would be expected to reenlist and don’t. Enlistments are from 2-6 years depending on service. If enlistments do not keep up with those leaving, the size of the military will shrink. We can then expect the Left to get us into another unwinnable war AND try to reintroduce the draft.

Not just a patriotic person, what about patriotic parents? Frankly who would want to see lives wasting fighting for the Left’s perversity and depravity?

If you want to protect America, join a militia, a shooting club, or go hunting with your buddies.

Makes people want to enlist in the Russian military.
If you fight, you want to fight with those who are focused on winning.

What about how demeaning drag is to women?

Right and wrong changes every five minutes. It’s hard to keep up any more.

Bad news: Biden*, Lloyd Austin, and the rest of the Communist regime have openly called for war against American citizens. As far as I can tell Biden* is the first head of state to imply that he willing to use nukes against his own citizens. So American taxpayers can look forward to watching their loved ones being slaughtered or turned to radioactive dust by weapons they paid taxes for.

Good news: the US military has lost every single war it fought since 1945. That is three quarters of a century of expensive saber-rattling futility, and a military composed of drag queens and BLM thugs seems unlikely to break that losing streak.

They’ll still try, and the bloodshed will be historic.

It’s got to the point where there’s not much too add in the way of comments, so I just give thumbs up.

The only legitimate reason I can see for a drag queen show on a military base is to show prospective spies how they can learn to pass as a woman when it’s necessary to shield their true identities. (Google Shi Pei Pu for a good example.)

How many of these pilots and airmen are planning to become spies?

What the actual hell??

Welcome to the Weimar Republic.

How stupid do you have to be not to learn from history?

I will leave it to your imaginatin how drag queen can “promote readiness..”

I’d say all the jokes about the airforce are true, but unfortunately this “wokeness” has infected all branches of the military. What will it take, another Pearl Harbor to really wake people up?

It all started with women. Once women were in, they had to have all sorts of touchy feely things for them so they would feel good.
Then women became high ranking officers, (many of them lesbians) and they demanded that homosexuals be allowed in the military.
Once homosexuals became part of the military, they demanded constant threats against any enlisted man that did not go along with their gay program. Constant communist like “re-education” of offenders.
Now the military is one big gay pride parade. A bunch of stupid, useless clowns unable to fight and win a war.

What’s bizarre to me is the notion that this is “necessary” for morale. So those airmen have morale problems that can only be solved by dudes in dresses?

When I was in the Navy (in my youth, so long ago!) I certainly had low points sometimes, but this would not have solved them.

Interesting change. The Nellis Casual Bar in the ’70s used to have a ‘Lady’ who would bring her stable of ‘dancers’ into the club once a week to ‘entertain’ inebriated fighter pilots. At some point, that was deemed unacceptable and stopped. And today, it has been replaced by this? Cheers –

I’m sure the Chinese Air Force is into this as well. (Sarc)

That’s close. It’s been revealed that all the drag queen attire used by the USAF is made in China.

“…readiness of the military.”

HAH By the time they got their makeup on and FINALLY decide what to wear we’d all be toast.

Two Comments:
1. I hope what goes on in Las Vegas stays in Las Vegas.
2. They don’t call Las Vegas “Sin City” for nothing.

Because what happens in Vegas stays in Vegas.

No doubt this is why the U.S. lost the war.

Yes, but the object back then (and pretty much all the way up through Monty Python) was to laugh at them because they were so ridiculous. Something you of all people should be familiar with.

Well we won’t be laughing when one is sitting in the white house. And the way we’re going it won’t be long now.

Plus of course the British unit that fought while wearing dresses and stockings:
https://www.mirror.co.uk/news/uk-news/world-war-2-soldiers-manned-13048757

You’ll never find photographs of Nazis in drag, that’s for sure.
https://nationalpost.com/news/cross-dressing-nazis-a-german-artist-found-so-many-photos-of-them-he-published-a-book-about-it

We are vulnerable to Russians in drag. Practically inviting them onto our bases.