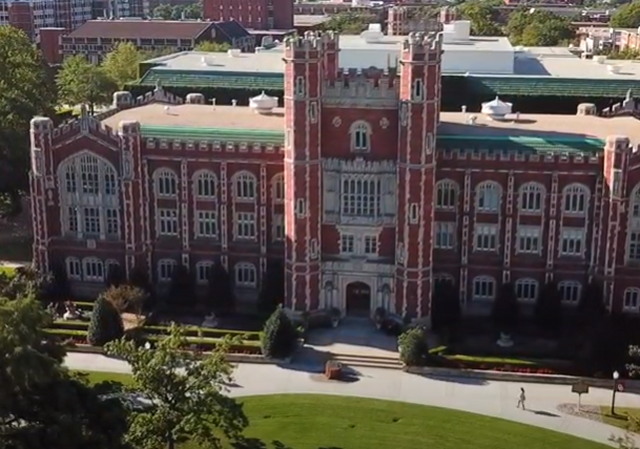 Explosive recordings obtained by the Foundation for Individual Rights in Education (FIRE) show how higher education continues to censor and indoctrinate students.

This is another example of political bias on college campuses. Students are being told what to think and what not to think.

The University of Oklahoma is a public university. What’s happening here is a clear violation of the constitution.

Daniel Burnett and Sabrina Conza report at the FIRE Newsdesk:

Do you question whether refusing to use preferred pronouns is hate speech? You can’t — writing on that topic is “not acceptable.”

If you’re a student at the University of Oklahoma — congratulations! Your instructor may already have done all of the thinking for you. But beware: Deviating too far from an instructor’s personal opinions can cost you.

“Anti-Racist Rhetoric and Pedagogies” is one of nine professional development workshops for instructors and grad students at OU. Held on April 14, it featured three faculty presenters teaching instructors how to foster an anti-racist environment in their classrooms. But it’s not just racism the presenters encourage participants to root out.

One of the workshop leaders, Kelli Pyron Alvarez, explained in the recording how undergraduate students in one of her introductory English courses are “a little bit more emboldened to be racist” (17:17). To combat this, she forbids huge swaths of classroom speech, including “derogatory remarks, critiques, and hate speech,” as well as “white supremacist ideas or sources,” unless the student is using those sources to dismantle racism.

In one chilling passage, the instructor uses the phrase “report them.”

If you are wondering what sources or ideas are off limits because they fall into Pyron Alvarez’s subjective categories of white supremacist sources or “derogatory remarks” — well, she never specifies, so you should be.

Making a mistake can cost you: “If they use any of those things, if any of those come through in their writing or in their comments, I will call them out on it.” (18:20)

And if it happens again, “report them.”

Imagine being an OU student who is “reported,” presumably to the administration, simply for your choice of text to analyze or what sources you include in a bibliography.

This is an actual description of thoughtcrime.

Pyron Alvarez’ fellow workshop leader Kasey Woody later goes into some detail on how instructors can “steer” students away from “problematic territory” to accomplish this. (46:01)

“I, in this case, usually look for my students who might be, like, entertaining the idea of listening to a problematic argument. Then I say, ‘we don’t have to listen to that.’” (45:45)

That’s right — even thinking about listening to a disfavored argument is apparently to be discouraged.

This short clip will give you an idea of what’s happening:

A recording of an “Anti-Racist Rhetoric & Pedagogies” workshop acquired by FIRE raises alarm bells about the state of free expression and conscience at @UofOklahoma.https://t.co/8DXLXnaqbf pic.twitter.com/JkU5JMEOel

The hour-long video of the training is below if you have the time or desire to watch it. Here’s an example of what you’ll hear:

Another participant asked what rights instructors are supposed to respect. (You will no doubt be shocked to hear that freedom of speech or conscience is not found in the workshop leaders’ answer.) Asked what they should do if, for example, a cisgender student wanted to examine arguments about the use of someone’s preferred pronouns, Woody focuses on “leading them” away from wanting to even debate the issue, because, she suggests, the stakes aren’t as high for a cisgender student. She advises instructors to sit the student down and “have a conversation — and be kind with the student about it — but help kind of lead them.” (57:30)

“I’m not so kind,” she responds. “If they’re writing and their goal is like ‘Oh, I should be able to use whatever pronouns I deem acceptable for this person despite how they identify,’ then they are invalidating that person’s humanity and their existence. And that’s not acceptable. So I flat out tell them that. This is what this is doing. You need to pick something else. You’re not doing that.”

These people are not educators. They are political actors and tyrants, and they’re being paid with taxpayer dollars.

The Governor, Kevin Stitt, is a Republican. This is going on under his nose. Where has he been while this is happening ? ? ?

This will not stop until some people start getting fired. God knows the CRT loons have no problem cancelling and firing any one that opposes them. So, this will not change unless leaders take real action.

Not just fired, blackballed so they cannot corrupt any young minds.

Do you think they invited him to their little Klavernklatsch? He couldn’t do anything until someone informed him of it. And unlike Commiecrats, he has to follow “the law” or they walk.

Well we have finally reached the point where it’s possible to commit thought crimes. And it’s not theorectical. Mike LaChance provides an actual description of a thoughtcrime is this article.

It is pretty discouraging to me to see the things that are going on in our country today. My only consolation is to go through the comment section and look for comments from trolls like mark311 telling me how great things are under Biden.

Sorry, we reached that point long ago, and most people didn’t even notice.

Never allow the left to make “imaginary categories” of items and behaviors that they claim exceed constitutional protections, especially when they demand total control over what gets added to those categories as time passes.

“we reached that point long ago”

Yeah, I know Henry. Maybe if I go read some troll comments it will cheer me up. Reminds me of Kevin Kostner in Postman: “Stuff’s getting better every day.”

If this can happen in Oklahoma, be sure it is worse in your state. It’s time to demand the firings of every one of these vicious racists and Marxist freaks. There is no place in the United States for people this evil.

The world has gone “woke”. Here’s another example.

“CHICAGO (November 13, 2020) – The Board of Directors for the National Association of Realtors® today voted in favor of a motion presented by NAR’s Professional Standards Committee making it a violation for Realtors® to use harassing or hate speech toward any of the protected classes under Article 10 of NAR’s Code of Ethics. Those include race, color, religion, sex, handicap, familial status, national origin, sexual orientation and gender identity. The Professional Standards Committee recommendations come as NAR works to reaffirm its commitment to fair housing and position its members to lead America’s real estate industry in the fight against discrimination and inequality.”

When did NAR become a social organization ? Their mission is to advocate for their members – not get involved in social causes. And if they are now a cause-driven organization – why stop there. Why not advocate for all the injustice in the world ?

This is spreading to all types of private organization due as a result of extortive race-baiting people and organizations. Even many corporations are infected with this agenda.

Shareholders have to get active. They invest for a return – not for a company to take on social causes. Activist CEOs should use their own time and money to pursue their private agenda – not the shareholders time and money.

I dunno. I’m going to give them that one.
It’s not ethically distinguishable from the “morals clause” demanded in the contracts of athletes and actors (please stop laughing) since the pre-war days.
Did “Say it ain’t so, Joe” hurt the reputation of the White Sox and the American League? Definitely.
Would it hurt Re-Max and the local franchise for Rona Realtor to get called out for posting that she was relieved that the “nice Christian couple” outbid the “lesbians” for the four-bedroom in Prissy Acres? Undoubtedly.
Note that “Realtor®” is their trademarked term for a professional who ascribes to the tenets of their private Association. Unlike “lawyer,” one can easily be a “real estate agent” without being a “Realtor®,” and many are, and most homebuyers see no disadvantage to dealing with one.

They can do this, or they can get their ridiculously excessive 6 or 7% out of every transaction.

I don’t think they can do both.

College is being devalued in the real world as a consequence: Many employers are requesting “Degree OR x years of work experience” as qualifications for positions which previously required a 4 year degree.

A decade from now, I will expect to see college degree disappear from job requirements for many professions.

Or a degree may become a liability.

That is already true for Affirmative degrees. It is nearly impossible to tell Affirmative chaff from wheat. You just do not know what you have until you have an employee for months. Maybe it would help to actually test their knowledge.

A degree in grievance studies (gender studies, ethnic studies, etc) is already a liability. Employers would rather have employees who aren’t going to cause trouble.

People with nothing better to do and nothing positive to offer–that’s what these women are.

They love to hear themselves talk their pseudo-intellectual multisyllabic non-words and phrases. .

Was not the purpose of Newspeak to prevent thought and communication? Slaves only need to listen and obey. Thinking is subversive.

Perhaps the taxpayers of Oklahoma should write the University President and Board of Trustees and ask for some accountability.

We should outlaw taxpayer funds going to colleges and universities.

As others have said before, we’ve won the argument. There is no other reason to suppress what our side has to say, except that they know their arguments can’t compete.

If their arguments were valid, they would teach their students critical thinking skills, and then have them apply the skills to the arguments. They would win. But they know that’s not what would happen, so they don’t teach the students how to think and they won’t let even their indoctrinated students listen to counter-arguments. This speaks for the fact they know their arguments are not winners. Yet even with this understanding, they persist in promoting their faulty ideas. Or do they believe they have great ideas but just can’t formulate good arguments in support of them? Does it occur to them that if good arguments don’t exist, maybe it’s because the ideas are bad? Probably not. The definition of “ideologue” is a person who is “blindly partisan”. What we have here is an effort of the blind to make others blind before they are able to see; allowing students to see must be prevented at all costs.

Where is the Oklahoma State Legislature in this?