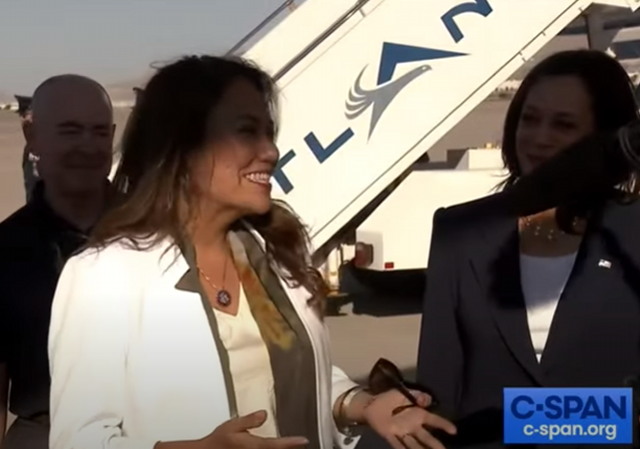 A little over a week ago, Kamala told migrants “do not come.” Now Escobar is standing next to Harris comparing our southern border to a welcoming station.

A Texas Democrat referred to El Paso, Texas, as “the new Ellis Island” as she accompanied Vice President Kamala Harris to the southern border on Friday.

“Welcome to El Paso, welcome to my community, to the new Ellis Island, to the capital of the border,” said Rep. Veronica Escobar, who represents Texas’s 16th Congressional District, which encompasses El Paso.

Escobar went on to express a “heart full of gratitude” to Harris and Homeland Security Secretary Alejandro Mayorkas for their approach to Central American migration at the border.

Escobar went on to describe the southern border as “our nation’s front door.” Wouldn’t most people describe illegally crossing the border as sneaking in through the back door?

This Texas Congresswoman is very excited about El Paso being "the new Ellis Island" pic.twitter.com/DTkKhBFDh5

Do Democrats have any idea how bad this sounds?

"The New Ellis Island." Democrats aren't even hiding it anymore. They're inviting people to come illegally and continuing the Biden administration trend of America Last. pic.twitter.com/Nbl9TXKzRk

Three months ago, I joined some of my colleagues from the @GOPoversight Committee on a trip to El Paso, the city @RepEscobar just called the new "Ellis Island".

The crisis is nothing to be proud of. Children are being moved by the cartel, and drugs are flooding the country. pic.twitter.com/H7rqhpGFKT

Democrats: "Do not come."

Memo to Democrats: El Paso is not Ellis Island. Not even a little.

“The new Ellis Island”? Really?!? If one is truly trying to secure our border, this is Exhibit A of exactly what not to say. The Democrats keep tripping over themselves racing towards open border policies and rhetoric. pic.twitter.com/gMa1gctmRK

This is the same woman who in March, accused Texas Republicans of using the border as a prop.

Rep. Veronica Escobar says that Texas Sens. Ted Cruz and John Cornyn are using the southern border ‘as a prop’

During an episode of “The New Abnormal” featuring editor-at-large Molly Jong-Fast, Escobar lamented that immigration has been politicized to a point where crafting real solutions has been absent from the debate.

“I think there are 18 senators that are parachuting into Texas and that delegation is led by John Cornyn and Ted Cruz,” she said. “These are people who are about to engage in political theater, use the border as a prop, [and] do a whole lot of complaining and finger-pointing. But these are the same people who’ve been in the Senate for a number of years.”

Escobar’s words on Friday speak volumes. Democrats do not view what’s happening at the border as a crisis. They see it as a plus.

Yeah and that’s putting it kindly.

Terrible comparison. At Ellis Island, the people coming in were screened for disease and means-tested so that they wouldn’t end up stealing from the American taxpayer.

What would happen if we have a de facto preference to Whites from one country – say, Sweden?

The SJWs would scream and riot. In fact we have given preference to one racial group Hispanics from Mexico and a few nearby countries.

They have exceed their annual immigration quota and taken advantage of our good-nature and open society.

THE USA SHOULD STOP ALL IMMIGRATION FROM MEXICO UNTIL THE REST OF THE WORLD CATCHES UP. THAT WILL LIKELY BE 10 to 15 YEARS. UNTIL TEN, THOSE CLAIMING ASYLUM FROM MEXICO CAN BE TRANSPORTED TO OTHER COUNTRIES IN THE REGION LIKE PANAMA, COLOMBIA AND VENEZUELA. ONCE YOU START RESETTLING ASYLUM SEEKERS TO PLACES OUTSIDE THE USA – YOU WILL FIND THE NUMBER WHO CLAIM ASYLUM DROP DRAMATICALLY.

It’s not fair to the millions of Asians, Africans, Europeans, Arabs and others who have patiently waited to immigrate to the USA.

As for Justice ? If these Social Justice Warriors (SJWs) really cared about justice – they would care about the other races who are severely disadvantaged as Mexico get a pass on cheating the USA. The SJWs reveal themselves as either (a) profoundly ignorant; or (b) partisan operators; or (c) both.

All my great-grandparents came through Ellis Island. Other than photos, I never got to see Ellis Island in its heyday. But comparing those photos to photos of our “new Ellis Island,” I have to say the latter looks a lot more like our “new Gitmo.”

Not Ellis Island. That was a peaceful entry. This is more like the Galveston hurricane and storm surge.

Escobar’s hyperbole is sheer nonsense. El Paso is a transit point daily for thousands of people who live/work on a trans-border basis.

The nitwit doesn’t know her constituency very well if she thinks there is major immigration happening. That’s over 1,000 miles to the east, along the Ojinaga/Brownsville to Laredo/Neuva Laredo sector.

How much money do Democrats get under the table from Cartels ?

The Cartels have a multi-billion dollars business that thrives on open borders. They obviously want Democrats to stay in power a long, long time.

Like any good business people – they will support politicos that benefit their business. They have thousands of ways to do this with clean money they launder and with “grey money” that they cannot easily get out of the USA (that’s why they often invest in USA businesses and USA assets – better to use it than to lose it).

By the way, Dems run the largest pool of “Dark Money” in history during the 2020 election.

If there were any real investigative reporters – the dirty money in politics might be revealed.

You got that right!
Mighty funny how the D crowd loves their Benjamins but exorciate Trump over wealth.

Democratic Rep. Veronica Escobar of Texas should be made famous. The border is a mess, and the legal families of Mexican extraction are no happier about it than their neighbors.

Democrats like to pretend that all hispanics are illegal aliens, and it just is not so. Also, coyotes and gang members, along with their crime, are not welcome among any people with families. In addition, Mexican families tend to be both Catholic and very socially conservative. It may take them a while, but they are a natural fit with the rest of what now is called “Conservatives.”

Now I wonder if Escobar actually knows what went on at Ellis Island. It wasn’t the wonderful “welcome center” that some think. It was an immigration center where legal migrants were screened for diseases, ability to support themselves etc. before being allowed into the United States. And if you were deemed an undesirable for any reason then you were turned around and deported back to the country from whence you came. Just saying.

That’s right. Ellis Island was a provisional doorway, not a welcome mat. At one time, American lives mattered, and immigrants were welcome to apply for entry after discerning local and foreign conditions.

“Democrats do not view what’s happening at the border as a crisis. They see it as a plus.”

This has always been the case. The “Ellis Island” remark is a shiny object (read distraction) for us to focus on.

A couple of comments from Joseph Goebbels:
– Propaganda must label events and people with distinctive phrases or slogans
– Propaganda must facilitate the displacement of aggression by specifying the targets for hatred

The Dems want us to focus on the BS words and not the actual invasion.

Though maybe taking Rep Escobar at her statement at face value would be a good idea. Let’s agree to reinstate every protocol, procedure and policy regarding immigration as was in place in 1954, when Ellis Island closed.

Of course that was during the Eisenhower administration which also conducted ‘Operation Wetback’ in which approximately 1.3 million illegal aliens were forcibly rounded up in the interior and deported.

Bless and keep my maternal Grandmother Anna, who did come to this country through Ellis Island. I had the opportunity to tour the partially restored facility… it was unbelievably moving, on a personal level.

Escobar can pound sand with Kamala. History will not treat them well.

There needs to be a minimum IQ standard to hold office. Congress has been being dumbed down.

What gives with those Harris pantsuits? I’d be afraid to stand directly in front of her lest the coat button fly off like a rivet on a submarine way below its maximum depth.

So now the best move would be for Trump to come down and hold a contrasting presser in one of the places where illegal incursions are actually taking place.