Given all the immigration games played by federal judges on the orders issued by President Donald Trump, turnabout is fair play.

Last week, a federal judge in Louisiana ordered the resumption of oil and gas leases for the Gulf of Mexico and Alaska that the Biden administration blocked.

The 13 states said the administration bypassed comment periods and other bureaucratic steps required before such delays can be undertaken. Doughty heard arguments in the case last week in Lafayette.

The moratorium was imposed after Democratic President Joe Biden on Jan. 27 signed executive orders to fight climate change. The suit was filed in March. The states opposing the suspension said it was undertaken without the required comment periods and other bureaucratic steps.

Doughty’s decision was very harsh on the approach taken by Team Biden, accusing the Oval Office occupant of exceeding his powers.

Judge Terry A. Doughty of the United States District Court for the Western District of Louisiana granted a preliminary injunction Tuesday against the administration, saying that the power to pause offshore oil and gas leases “lies solely with Congress” because it was the legislative branch that originally made federal lands and waters available for leasing.

Now, states are reviewing their next legal move in the wake of the decision.  For example, Wyoming Gov. Mark Gordon celebrated the ruling. He hopes the decision will benefit his state.

“This preliminary injunction is outstanding news for Wyoming and our energy workers. It confirms the position we have maintained since this ‘pause’ was implemented,” Gordon said.

“The Biden Administration has in fact put in place an unlawful, de-facto moratorium, causing economic harm to states like ours that rely on lease sale revenue to fund our schools and critical functions of government,” he added.

Wyoming is the nation’s top producer of onshore gas that takes place on federal lands, and second in the nation for its federal onshore oil production, according to the Bureau of Land Management.

Of the nearly 63 million acres in the state of Wyoming, oil and gas leases managed by the bureau accounted for 8.4 million acres of land from over 13,000 leases in recent years.

With Tuesday’s ruling, Gordon said he hopes a similar ruling will be issued in a case filed in the U.S. District Court of Wyoming.

Meanwhile, New Mexico industry leaders applauded the decision, noting they would get the biggest boost from the block on the ban.

In a statement from the New Mexico Oil and Gas Association (NMOGA), the state’s largest fossil fuel trade organization, the group said New Mexico was the nation’s largest producer of oil and gas on federal land and no state would see as negative an economic impact under the ban on new leases.

Even worse, NMOGA argued, the leasing pause could cause oil and gas companies to move production to other countries with less stringent environmental safeguards.

“As the nation’s largest onshore producer of oil and natural gas on federal lands, no state’s economy or budget stood to lose more as a result of the leasing pause,” read the statement.

“Leasing bans and other hurdles to oil and natural gas production in New Mexico weaken energy security, increase costs for consumers, and reward other parts of the world who do not share our strict environmental safeguards or our commitment to fight climate change.”

I will point out that, given all the immigration games played by federal judges on the orders issued by President Donald Trump, turnabout is fair play. 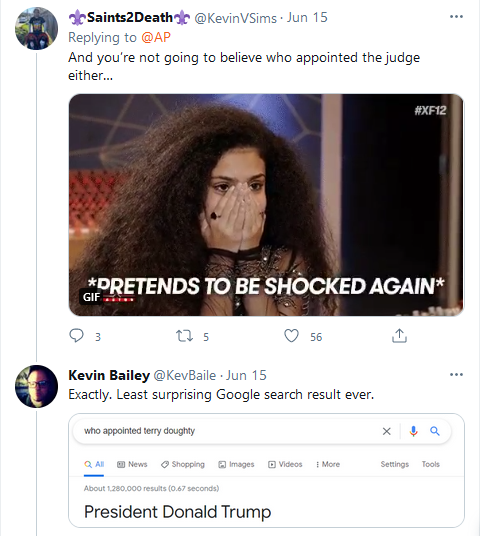 Huh? What? Tyranny is being challenged?

TY Leslie… nice to see first thing in the morning. Now maybe the courts can undo the other 49 EOs. Not holding my breath though.

Thanks to the NSA we now know that the FBI (and subsequently the DOJ) have illegally surveyed 16,000 Americans. It would be prudent to assume that among those 16k are all serving Federal Judges. So, Doughty is either extremely clean, fearless of just doesn’t give a damn about what the FBI has on him.

Even if they did undo the other EOs, so what? Keystone is permanently dead, and nobody is going to start a pipeline project in the US ever again because of what Biden did to Keystone. Too much political risk that the courts will keep delaying your project until a new administration can kill it.

Yes, this is exactly what the states and the Republicans need to do. Go venue shopping and sue the Biden regime over every Executive Order he has signed to date. Go after every policy he has espoused. Every rule and regulation promulgated by his executive branch lackeys. Lawfare, after all, isn’t just for the democrats. The states and Republicans should keep the DOJ and AG Garland busy non-stop defending his master’s lunacy for the next four years (if that). Bring the lawsuits on!

This will be a relief for New Mexico as the state and producers had worried that rigs were headed for Texas. Short trip and on-shore oil production in Texas is on private land.

Texas and Louisiana are the new Hawaii.