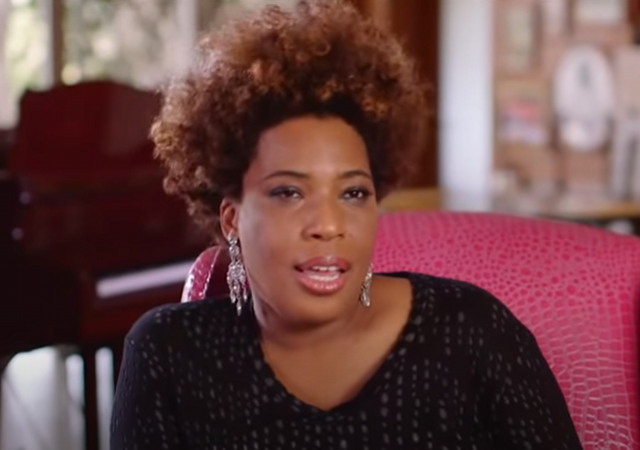 Grammy-winning singer Macy Gray has decided that the American flag does not represent all Americans and needs to be changed, thus proving once again the left’s contempt for the United States.

The left scoffs at our concern over the destruction and removal of historic statues. They laugh when you bring up cancel culture or voice concerns about rewriting history with the 1619 Project. Then they prove our concerns are valid over and over again.

Gray didn’t just mention this on Twitter. She wrote an op-ed for Marketwatch:

For Juneteenth, America needs a new flag that all of us can honor

The Confederate battle flag, which was crafted as a symbol of opposition to the abolishment of slavery, is just recently tired. We don’t see it much anymore. However, on the 6th, when the stormers rained on the nation’s most precious hut, waving Old Glory — the memo was received: the American flag is its replacement.

President Biden, Madame Harris and members of Congress: the American flag has been hijacked as code for a specific belief. God bless those believers, they can have it. Like the Confederate, it is tattered, dated, divisive, and incorrect. It no longer represents democracy and freedom. It no longer represents ALL of us. It’s not fair to be forced to honor it. It’s time for a new flag.

Incorrect? Let’s look to the stars. There are 50, where there should be 52. D.C. and Puerto Rico have been lobbying for statehood for decades. Both have been denied, since statehood would allow each territory’s elected officials seats in the house.

Assuming D.C. reps would be African-American and Puerto Rican reps would be Hispanic, the ultimate assumption is that these elected officials would be Democratic.

You can see Gray’s redesign below:

OPINION: "Sixty-two years later, in 2021, we have changed and it’s time for a reset, a transformation. One that represents all states and all of us," writes singer Macy Gray. https://t.co/VTezKfjxdr

We will not being replacing the American flag @MacyGraysLife. If you hate our flag that much then you should really consider leaving and trying to find a better country. You won’t find a better one but maybe you’ll come back grateful to be American. https://t.co/4orc9XbwsQ

If you don’t like the American flag, feel free to leave. https://t.co/i62saDBYaJ

.@MacyGraysLife had one hit song about 20 years ago and hasn’t done anything since.

Now she wants to come out from the dark and say that she hates our flag.

Your world would crumble if you weren’t in America. https://t.co/g5S8zaykDn

You got to be kidding me.

Mark my words: ALL OF THIS will badly backfire on the the left. They will be voted out for a VERY LONG TIME.

There are 195 countries in the world.

194 of them don’t have the American flag.

If @MacyGraysLife or anyone else hates the American flag so badly, they should pick a flag they like & go live in the country that flies it! https://t.co/337AXRyTLS

A new flag?! No thanks. Old Glory still waves as a symbol of liberty and justice for all.https://t.co/Rfrn5M3exz

Gray’s emphasis on the Capitol Riot and granting statehood to DC and Puerto Rico makes it obvious that this is all about partisanship. In case there was any wonder, Gray participated in a concert in October of 2020 to benefit Joe Biden.

Joe Biden’s presidential campaign is making another fundraising push in the final days before the Nov. 3, with a virtual concert on Sunday that will feature a long lineup of musicians including John Legend, Cher and Andra Day.

Tickets to the I Will Vote Concert start at $25 per person, and rise to $1,000. Biden and his wife Jill are scheduled to attend along with Kamala Harris and Doug Emhoff.

The American flag is not divisive. The same cannot be said for the American left, which seems to spend every waking moment trying to figure out how to further divide Americans.

To the left, everything is divisive. It’s how they operate.

Remind me which flag the people who came into Texas to emancipate the slaves carried. Hint: It was not the Stars and Bars.

she’s been irrelevant for decades

Hey! It’s always been of supreme importance to me to understand how my supermarket checkout clerk, pool maintenance person, or some pop singer I never heard of would run America if they were in charge.

Racialism is alive and well, Thanks for the reminder, washed-up singer person.

Is there a post here about DeSantis sending help to Texas and Arizona to stop the invasion by illegal aliens?

I would have an article instead, asking Gov. Kemp of Georgia why he isn’t sending help to those two states. Far more newsworthy.

ONE Country – ONE Flag.

> If we cannot agree on at least that – there is really no country.

“Tattered and divisive” sounds like she’s talking about herself.

it’s divisive if your a marxist

If that flag is replaced, count on it being blood red without another color to be seen.

Washed up singer trying to get in on the racist grift.

The diversity, not limited to racism, sexism, ageism, racket.

It’s not the flag that’s divisive.

A lot of leftist morons don’t know about Juneteenth because it’s a local holiday shared by Texans, but not the rest of the country. It’s also the source of a lot of leftist twaddle objecting to images of smiling black kids and slices of watermelon. They claimed that not all black people like watermelon, and it’s a hateful stereotype.

Smiling black kids, of course, refers to freedom. The watermelon ripens about this time of year, and as a child, my lily white family would tell me that we did not eat watermelon until Juneteenth.

So now we have these ignorant fools running another tirade, thinking that they are shoving something down the throats of freedom-loving Americans.

I hope to see a revival of the true imagery of Juneteenth: bring back the pictures of happy black kids, with a slice of watermelon nearby. It’s time the leftist ignorami learned a little bit of history.

I have not seen any kid who does not like watermellon, regardless of race.

And now everyone is reminded that Macy Gray exists which, as a celebrity, was her only real motivation for making the statement.

A washed up, fading celebrity.

Colors of the stars to represent the racial majority of the inhabitants of each state. That’s not divisive at all.

Give me some of your oppression!

Um, DC isn’t a territory. And DC and Puerto Rico have elected officials serving in Congress, albeit they can’t vote on the House floor, only at the committee level.

Furthermore, whether or not an elected representative to Congress from DC is African-American is irrelevant. DC is 90% Democrat, which means whoever wins a Dem primary race is essentially a lock in the general, regardless of skin color.

Do you see the problem now?

In Mississippi we celebrate Jumpteenth

Jumpteenth Saturdays when white folks leap into the air, trying to pin 8 black stars on a neighborhood Old Glory to establish proportional equity and static equilibrium in lieu of reparations.

If we could only jump …

I used to leap for joy when I read a good post like yours. Now I only leap on leap year. And even that is getting hard.

UP. Leaping everyday of every leap year produces both fatigue and acute tendentionitis. Lower the flag, and slow down.

“If you don’t like the American flag, feel free to leave.”

There needs to be a means to strip their citizenship and expell them.

Why in the world doesn’t she emmigrate??

Emmigrate one step ahead of my foot.

Who is this person and why does her opinion matter any more than my cat’s?

Pro-Life, Liberty, and the pursuit of Happiness, where men and women stood against slavery, and Christians recognized the dignity of all men, women, and babies. The red, white, and blue represents a nation, a philosophy, and people who stand against past, present, and progressive diversity (e.g. racism, sexism, ageism).

“America needs a new flag that all of us can honor.”

Will her flag be one that all of us can honor, or just some of us?

It’ll be a flag people who agree with her can honor. The rest don’t matter to her.

From a 3/5 past to mitigate Democrat leverage, to 1/2″hyphenated” Americans present to isolate people… persons in color (e.g . racist) classes, and a selective, opportunistic, politically congruent (i.e. Pro-Choice religious) progressive.

Diversity and orientation-neutral. A flag to represent our nation, the People… “persons” and our “unPlanned” Posterity.

The 3/5 past didn’t mitigate Democrat leverage, it augmented it. The alternative was that slaves would not count at all towards population and therefore House seats for the state.

It is the symbol of our country. If you don’t like it, you are welcome to get the fuck out.

Come and take it.

The left seeks to divide. The flag represents everyone.

Macy Gray’s physical body is still alive. However, her talent and career died at least a decade ago.

Joe Biden and Cher will highlight the ‘all you can eat’ applesauce and cream corn buffet. Cher will perform at both the 3:30 pm and the 5 pm late night performance.

I understand they are planning her frontal lobotomy sometime in JuneHe psychosis is worsening.. .