“I’m worried that President Biden is nominating for federal office individuals who do not share a view of America as a good and decent place, who do not believe that the history of this nation is worth celebrating.” 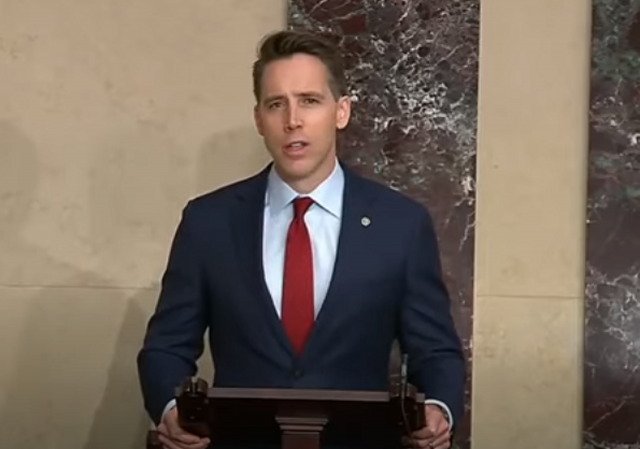 Hawley drew on his own experience in higher education. He worked as an associate professor at the University of Missouri School of Law at one point.

In a floor speech Tuesday morning, Senator Josh Hawley (R-MO) delivered a scorching rebuke of Critical Race Theory and “those things that divide us,” as the Biden administration tightens its embrace of critical theory and its proponents.

“Service to this country is an act of selflessness that affirms our nation is a place worth believing in. But I’m concerned that the present administration and this president, President Joe Biden, do not share this point of view. I’m worried that President Biden is nominating for federal office individuals who do not share a view of America as a good and decent place, who do not believe that the history of this nation is worth celebrating. Nominating instead people who believe that this is a country founded in racism and shot through with corruption.”…

“As someone who has taught in our nation’s universities, someone who has seen our institutions of higher learning up close,” Hawley reflected, “I would say to those in the media and elsewhere who now deny that there is any such thing as critical theory, that critical theory is in fact very real, it is very influential.”

Hawley was addressing Biden’s nomination of Kiran Ahuja to the Office of Personnel Management.

Sen. Josh Hawley, R-Mo., railed against critical race theory, expressing concern that it is influencing the inner workings of the Biden administration as he opposed the nomination of Kiran Ahuja as director of the Office of Personnel Management.

In remarks on the Senate floor Tuesday morning, Hawley accused President Biden of nominating people “who do not believe that the history of this nation is worth celebrating,” but that the U.S. is “systemically racist” and unjust.

“It appears to have become the animating ideology of this administration,” Hawley said.

The diatribe was in opposition to Ahuja, who Republicans have accused of promoting critical race theory.

Watch a clip below:

Senator @HawleyMO rips CRT as the "animating ideology" of the Biden administration:

"Dr. Kendi and his followers are in no uncertain terms advocating for state sanctioned racism in the United States of America." pic.twitter.com/6gJcO6gJCf

Hawley is correct in his assessment of CRT. His willingness to speak so frankly about the issue is one reason the left despises him.

The problem with critical theory is that it is designed to divide and tear down – the family, religious faith, and American history (like the 1619 Project). We need to be about building up & renewing those things that bind us together as Americans https://t.co/RN7v1G80g9

It’s more in the political correctness category than the racism category.

I have to disagree, it is an attempt by a minority to dominate everyone, it amounts to cutting off tall peoples legs to make them equal to short people, actually worse, because they want to prevent our children from achieving their full potential, to cut them down to the lowest achievers.

But affirmative action itself was and is racism. An uncomfortable and politically-incorrect observation, but entirely true.

Instead of rooting out acts of actual racism, the entire American system was biased slightly (and then more heavily) towards providing otherwise-unearned advantage to a class of people, regardless of whether or not they had ever personally been victimized by it, because that was easier for politicians to do. Instead of a specific crime, victim, and oppressor (prosecuting which is a valid function of government), government created a permanent victim class and oppressor class, most of whose members were never either.

Likewise, rather than apprehending and punishing actual violent criminals, the system trends increasingly biased against the ownership of arms, 99+% of which is entirely benign (plus is an explicitly protected right), because that, too, is easier for politicians to do.

Those tribal classifications and sorting then determine your future v your individual merit, accomplishment, ethics, morality or the lack of the same.

When the critical component of an ideology is based on ‘race’ ….that’s racism. It doesn’t matter who is offering up the ideology.

John C Calhoun would find a good bit of common ground with the folks pushing CRT/Equity.

It is an attempt to reorder the natural order, to one where the dumbest rule like kinks and queens and the smartest wash their feet and kiss their ass.

Since CRT is racism, are you trying to excuse it?
.

Even though I have never done anything to you, I am guilty because my tribe did something to your tribe. And, even through nothing was done to you, you are a victim because your tribe was treated badly by my tribe.

The media works REALLY hard at trying to deny reality. And every time they do – they lose more credibility and more readers/ viewers/ listeners. Then they cry about how they are suffering in the internet age because no one consumes the news any more. Try putting out REAL NEWS and maybe people will tune in.

As for CRT and leftist propaganda in schools – where has Hawley and all his colleagues been the last 25 years ? This problem is not new. It just mediatized with BLM. BLM does advocate for improving race relations or black lives. It advocates for exploiting the death of blacks for propaganda purposes. In that regard, it has set back race relations by 20 years and has done a disservice to the back community and to America. Someday there will be a backlash.

Well, 25 years ago, Hawley was in law school. I think if you read his Wikipedia bio. you will be impressed.

DEMS DENY CRT OR CALL IT A “RIGHT WING CONSPIRACY”

Democrats see what they want to see. It reminds me of Rep. Nadler saying that Atinfa does not exist – “It’s just a right wing conspiracy”

1. Chairman of Joint Chiefs of Staff – says CRT is just another theory of race. Is he that stupid ? It’s scary that he cannot see this as a national-security threat. Gotta wonder if our Nat’l Security Analysys are already indoctrinated. See https://www.reuters.com/world/us/top-us-general-hits-back-right-wing-uproar-over-racism-teachings-2021-06-23/

These people are either: (1) profoundly dumb; (2) profoundly uncurious; (3) liars and hooligans; or (4) auditioning for a hosting role on CNN or CNBC.

CRT is racism, foring everyone to wear their race onto every interaction

Kudos to Hawley for calling a spade a spade on this one.