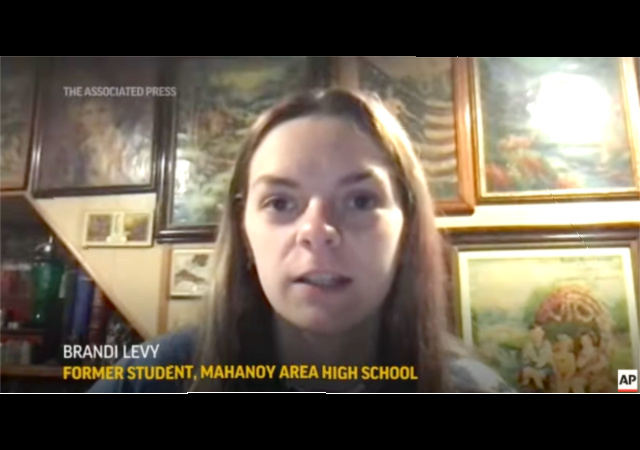 The Supreme Court ruled 8-1, though narrow, that Mahanoy Area High School violated Brandi Levy’s First Amendment rights when it kicked her off the junior varsity cheerleading squad after she made a profane rant on Snapchat off of school grounds.

Justice Clarence Thomas is the only one who dissented.

Despite having five points, the Court made its decision narrow. The Court says “schools have a special interest in regulating off-campus student speech that ‘materially disrupts classwork or involves substantial disorder or invasion of the rights of others.'”

“The special characteristics that give schools additional license to regulate student speech do not always disappear when that speech takes place off campus,” the Court explained. “Circumstances that may implicate a school’s regulatory interests include serious or severe bullying or harassment targeting particular individuals; threats aimed at teachers or other students; the failure to follow rules concerning lessons, the writing of papers, the use of computers, or participation in other online school activities; and breaches of school security devices.”

So the ruling does not deny schools the ability to regulate off-campus speech.

Thomas wrote in his dissent: “Assuming that B. L.’s speech occurred off campus, the purpose and effect of B. L.’s speech was ‘to degrade the [program and cheerleading staff]’ in front of ‘other pupils,’ thus having ‘a direct and immediate tendency to . . . subvert the [cheerleading coach’s] authority.”'”

Thomas concluded the coach had valid reasons to punish Levy.

Thomas pointed out this case differs from other cases because it “involves speech made in one location but capable of being received in countless others-an issue that has been aggravated exponentially by recent technological advances.” So since the technology can reach more people it can cause more harm to “the school environment than will an off-campus in-person conversation.”

However, I have to correct Thomas. On Snapchat, only people you approve can follow you and view your snaps. Celebrities, news outlets, sports teams, and others like those have public accounts. So no one would know about Levy’s Snapchat video if no one told on her. (If I am wrong please correct me.)

This is an interesting point: Levy being a cheerleader is more significant than if a non-cheerleader made the remarks:

First, the majority gives little apparent significance to B. L.’s decision to participate in an extracurricular activity. But the historical test suggests that authority of schools over off-campus speech may be greater when students participate in extracurricular programs. The Lander test focuses on the effect of speech, not its location. So students like B. L. who are active in extracurricular programs have a greater potential, by virtue of their participation, to harm those programs. For example, a profanity-laced screed delivered on social media or at the mall has a much different effect on a football program when done by a regular student than when done by the captain of the football team. So, too, here.

Thomas also has a problem with the majority assuming Levy made her comments off-campus. He acknowledged “it makes sense to treat B.L’s speech as off-campus speech” since they have “little evidence” it happened on-campus.

The coach viewed a copy of Levy’s snap, not the original, “created by another student.”

“But, the majority mentions none of this,” wrote Thomas. “It simply, and uncritically, assumes that B. L.’s speech was off campus. Because it creates a test untethered from history, it bypasses this relevant inquiry.”

Not sure why the ruling is considered narrow.

A broad ruling might have said ‘Schools may not regulate the off-campus speech of students.’ …

What’s not to understand? The ruling is narrow because it “does not deny schools the ability to regulate off-campus speech.” All it says is that in this case, with these specific circumstances and this specific speech, the school’s actions exceeded its powers, but in another case the outcome may well be different. In other words no change from the Bong Hits 4 Jesus case.

Why did they take this case if “Bong Hits 4 Jesus” was the same? I think the decision is good. No threats related to school, no academic cheating, otherwise they don’t have an interest in off-campus speech.

sounds like the court will allow schools to punish for mostly unprotected speech, though the “harassment/bullying” exception is always ripe for abuse by censorious leftists.

The Court wanted schools to be able to enforce academic honesty when doing school work off campus. Otherwise one could never assign writing homework, or basically any assignment including closed book exams during remote instruction.

So according to Thomas, exactly how can a cheerleader, or a football player, at a government school express dissent? Or does he believe that, unlike ordinary students, such students check their constitutional right at the door? That would be consistent with his other decisions on government schools’ authority over their students. I seem to recall that he’s explicitly said Tinker was wrongly decided and students have no rights, just as at private schools.

“schools have a special interest in regulating off-campus student speech that ‘… involves substantial disorder or invasion of the rights of others.’…
a school’s regulatory interests include serious or severe bullying or harassment targeting particular individuals…”

Did I miss the memo about school boards moving from the executive to the judicial branch? These things are punishable under general law, where defendants get full due process, and that’s where they should be addressed, not by kangaroo hearings in a school counselor’s office.

Well of course — by the very same principle under which breaches of classified information law are much more significant when made by a sitting Secretary of State than they are when made by an enlisted, gender-confused intelligence analyst. We’ve always abided by that principle, haven’t we?

Bingo. If it happens outside of school, then the school shouldn’t be able to punish. Period.

I agree, and I also think that cheerleaders are likely to deserve being upset.

So if she screamed profanities at her coach from the sidewalk in front of the school that would be a problem, but if she stepped into the road and did the same thing it would be fine?