“Our efforts to expose the bigoted view and dangerous conspiracy theories spread by right-wing activists has now resulted in @YouTube banning our channel and removing thousands of our videos,” RW Watch tweeted Monday morning. 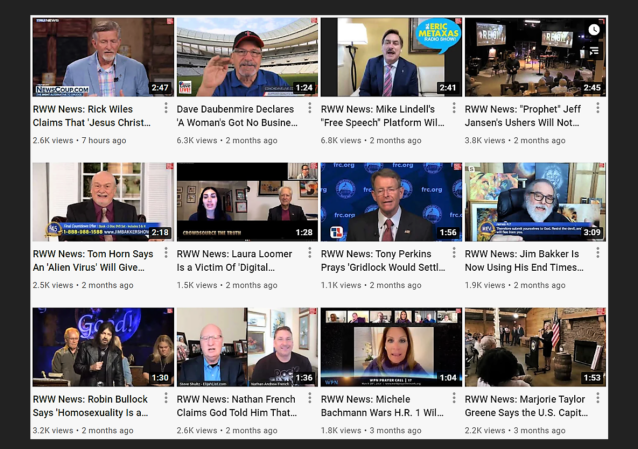 The thing about left-wing cancel culturalists and proponents of de-platforming is that they wake up confident every day, believing that the same standards they apply to their political opponents won’t be used on them. They operate from the mindset that having the website they’ve worked so hard on and/or social media pages they manage every day suddenly yanked out from under them without warning is not a fate which they’ll ever have to suffer, because they believe have the “correct” political beliefs.

But every once in a while, a funny thing happens to them. They get hoisted with their petards, either on purpose or by accident. The latter is precisely what happened to the “Right Wing Watch” YouTube page on Monday. Here’s the announcement they posted noting the popular video platform had unceremoniously banned them and removed “thousands” of their videos:

Our efforts to expose the bigoted view and dangerous conspiracy theories spread by right-wing activists has now resulted in @YouTube banning our channel and removing thousands of our videos. We attempted to appeal this decision, and YouTube rejected it. pic.twitter.com/74Rfi31uQe

RW Watch, which describes itself as a “monitoring” site that purports to “expose the activities of Radical Right political organizations,” told Business Insider yesterday that the site initially was permanently suspended after receiving its third strike. Senior fellow Kyle Mantyla explained why the channel kept getting flagged:

“Starting late last year when YouTube and all the other social-media platforms started clamping down on COVID misinformation and election fraud claims, a lot of our videos kept getting flagged for violating those even though we were trying to expose the people who are spreading disinformation,” he told Insider.

Mantyla said Right Wing Watch had stopped posting to YouTube in April when it received two strikes for violating the Google-owned platform’s community guidelines for posting misinformation related to the 2020 election because it feared receiving a third strike. The two strikes were set to last 90 days, and the first was set to expire at the beginning of July, Mantyla said.

Please RT if you're tired of social media companies letting the right get away with all kinds of stuff. https://t.co/jqDknO2hYM

Naturally, in response to their announcement Monday, the Media Matters-like site was deservedly mocked on the Twitter machine by conservatives familiar with their stance on canceling other conservatives:

Several hours later, however, after they’d appealed and after the Usual Suspects in the media rushed to their defense, RW Watch’s YouTube account was restored:

JUST IN: YouTube has re-instated Right Wing Watch, a channel known for doxxing and encouraging censorship of conservatives, after multiple complaints from left-wing journalists

Our policy team confirmed that this was a mistake by our reviewers and your channel has been reinstated. So sorry for the frustration this caused – with the massive volume of content reviewed every day, mistakes can happen, but we work quickly to fix them once we’re made aware.

“… we work quickly to fix them once we’re made aware” — unless they’re conservative accounts, of course.

Of course they reversed it for their lefty bretheran

Ultimately Twitter validated their belief that Leftist cancel culture and bigotry is okay and Right wing thought is to be proclaimed as dangerous. This is not a victory.

They just misunderstood the name “Right Wing Watch”. They thought it was a bunch of conservatives.