Pompeo slams Fauci’s China remarks: “The Chinese Communist Party doesn’t care for a moment, they have no desire for the world to know what happened.” 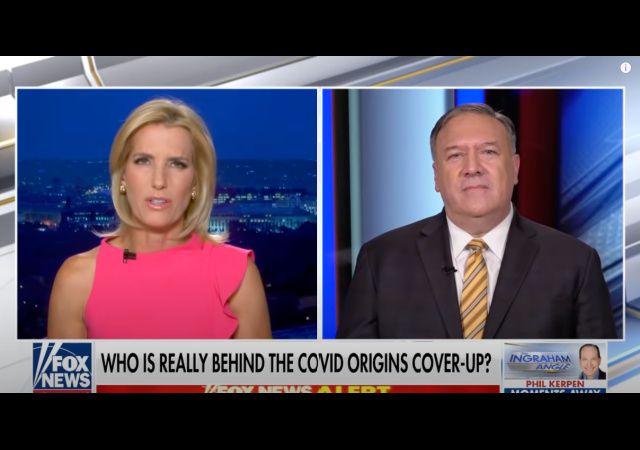 Former Secretary of State Mike Pompeo accused the National Institute of Health (NIH) of trying to suppress his department’s investigation into COVID-19’s origins.

Pompeo said he received the “typical pushback” within the State Department from people who did not like former President Donald Trump. At the same time, on the outside, NIH also wanted him to stop investigating COVID-19:

LAURA INGRAHAM, FOX NEWS HOST: Joining me now is Mike Pompeo, former secretary of state and distinguished fellow at the Hudson Institute. Secretary Pompeo, thank you for joining us. What we’ve learned over the past few days about Fauci and the NIH, and the State Department is truly disturbing. Your reaction.

MIKE POMPEO, FORMER SECRETARY OF STATE: Laura it should come as no surprise to anyone that there are folks at State Department that didn’t like President Trump, didn’t like me, didn’t like what we were doing and were going to work to thwart our efforts. So it’s no great surprise to hear Fauci this morning talk about how the Chinese have an interest in us discovering what happened. It’s just crazy talk. The Chinese have a deep interest in covering it up and they’ve done so pretty darn effectively. In fact, it was the State Department that ultimately, we had we had big fights inside the organization, but it was us ultimately, who put out documents in January 15 that demonstrated some of the central facts we now know that lead to the overwhelming amount of evidence that demonstrates that this probably did come from this virology lab. It was good work by the State Department team. We overcame lots of internal bureaucracy to get there. And lots of internal debate from NIH folks who were trying to suppress what we’re doing the State Department as well.

Ingraham mentions a great Vanity Fair piece about Miles Yu, the department’s top China strategist, who dove into the Wuhan lab’s website and made a list of questions.

Yu gave Pompeo the questions. Pompeo wanted access to the Wuhan labs, which is when the pressure to quiet down on COVID-19’s origins began to appear:

INGRAHAM: The Vanity Fair piece, secretary describes how a guy named Miles Yu, the State Department’s principal China strategist, began mirroring the Wuhan Institute’s website and compiling a dossier of questions about its research. The article then claims that in April, he gave this dossier to you and then you demanded access to the labs there. But then the Office of the Director of Intel later that month, released this statement, saying the intel community also concurs with the wide scientific consensus that COVID-19 was not manmade or genetically modified. Mr. Secretary, why was the DNI downplaying what you are trying to uncover at the time?

POMPEO: Well the Vanity Fair piece is right, I was handed an extensive piece of work that a fello named Miles Yu did. He’s a professor at the Naval Academy that was working for me at the State Department. He speaks Mandarin, he was able to read lots of things others couldn’t get their hands on. And it was pretty clear. It was April when I received that if I remember, right, it was in early May, just a few days after that I was on TV talking about what I could get declassified at that point. We worked diligently to get the Intelligence Community to declassify more. Director Ratcliffe was a great partner and trying to do that, but there were folks all over the community who just didn’t want to talk about this, who wanted to stay focused on other things. They didn’t want the world to know that the Chinese Communist Party was in the process of covering up–

Fauci insisted China has just as much interest as America to find COVID-19’s origins, The man flip-flops more than anyone else because now he wants to keep “an open mind” about how COVID-19 developed despite his emails saying otherwise.

POMPEO: –what turns out might have been several million losses of life. You know, I’ll leave that to others to speculate. But when you heard Dr. Fauci this morning, Laura, those are the exact same words, the exact same excuses, the exact same theories that the Chinese Communist Party has presenting for over a year now, we can all draw our own conclusions. I know this. We had a group inside the State Department, Miles Yu, a handful of others working diligently to get this information out to the American people so the world could see what the Chinese Communist Party had done to all of us.

INGRAHAM: But Dr. Fauci is essentially saying, what the CCP is saying about China, that it’s highly unlikely possible that things happen in a lab, but you really can’t tell one from the other when the way they discuss the situation at the start of this pandemic.

POMPEO: He implies good faith for the Chinese Communist Party, Laura. Here we are in the 32nd anniversary of Tiananmen Square, where we saw the brutality of this regime, a regime that doesn’t care about human life. For Dr. Fauci go and think for a moment that the Chinese Communist Party cared that there were people in Wuhan that were dying, whether it was Chinese people or Americans, whoever else might be there is just naïve beyond all possible imagination. The Chinese Communist Party doesn’t care for a moment, they have no desire for the world to know what happened. They could clear this all up in a minute if they wanted to. They’ve chosen not to, I think that’s another link in the chain that demonstrates that when we get to the end of this, we will have demonstrated that the Chinese knew what had happened, and their virology lab was at the center of it.

USA has been infected by CCP at all levels of government and industry. Social organizations are pushing to alter our society with CCP influence.

We will all become slaves to the CCP if we do not stop this now. Root out the corrupt politicians and business executives. Start with HUNTER BIDEN.

Tangential to this subject is yesterday’s essay at Twelveround:

Conspiracy theory? Probably, but then conspiracy theories of the past have been proven to be conspiracies in fact. One need only look at the Fauci emails to get a sense of that. It is the very fact that I can’t KNOW anything in this climate, that is the danger. It is that there is nowhere to get unbiased, factual information when all of the health organizations have lied for over a year; when all of the government agencies clearly and wantonly violated human rights for over a year; when those supposed “authorities” are part of an illegitimate, fraudulent and aggressively communist regime placed into office by lies and manipulation of the vote and determined disinterest in election integrity on both sides of the aisle.

What has been concocted is a soup of evil into which every issue must be thrown and come out tainted by lies and deception. Where does one go for the truth, then? It doesn’t exist and so one can only conclude that everything is a lie and then try to figure out what the globalists gain from it and deny them that.

It mirrors my own thinking to a T: when all official information sources are equally suspect, the most accurate (and ironic) route to the truth becomes personal cynicism and paranoia. But I can’t take credit for discovering this — generations of Soviets discovered it well before me.

We should have no sympathy for people who sell out their country to the CCP. They have sold their soul to the devil.

Muslim supremacists/terrorists; Chinese communists; black nationalist-terrorists; there are no totalitarian reprobates too unsavory for the vile Dhimmi-crats to kowtow to, to appease, to enable and to empower.

“, a regime that doesn’t care about human life.”

Which makes it much more likely that CCP would intentionally release it, figuring that they could afford to lose people, that such loss was acceptable as long as it damaged the West. And what did they do after release, quarantine Wuhan from the rest of China while allowing Wuhan residents to fly internationally.

“Here we are in the 32nd anniversary of Tiananmen Square, where we saw the brutality of this regime, a regime that doesn’t care about human life. For Dr. Fauci go and think for a moment that the Chinese Communist Party cared that there were people in Wuhan that were dying,”

We SAW this, folks.

Who you going to believe: The CCP or your lyin eyes?

In my opinion, every action last year by the Chinese, the Democrats, the Swamp and the MSM can be explained in the context of one key goal – getting rid of Trump.