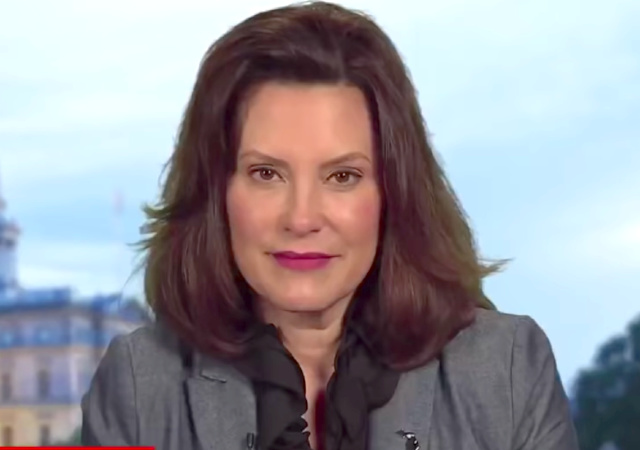 It appears California Governor Gavin Newsom isn’t the only state-level chief executive who may be recalled on the basis of their pandemic performance.

Legal Insurrection has chronicled the harsh restrictions imposed by Michigan Governor Gretchen Whitmer on her citizens.  We have also noted her hypocritical behaviors and double-standard application of rules to suit herself.

Now,  in a two-fer, the Michigan Court of Appeals has affirmed the Board of State Canvasser’s approval of petitions calling for a recall of Whitmer and Lt. Gov. Garlin Gilchrist.

Whitmer had challenged the petitions, which call for her recall based on the executive orders she had issued during the COVID-19 pandemic.

The court affirmed six of the cases but remanded one so that an error regarding the date on which an executive order was issued may be corrected.

Whitmer and Gilchrist had argued that the challenged petitions did not “adequately describe the authorities cited as reasons for the recall.”

For example, in one case the governor argues that a petition uses ambiguous language because of its use of the word “bars,” which dictionaries describe not only as a place that sells alcoholic beverages, but also a counter where food and beverages are served and other establishments that sell nonalcoholic drinks like coffee.

The court’s ruling upholds a previous decision made by the Michigan Board of Canvassers that the petitions were legit and could move forward. Nevertheless, she persisted.

A spokesperson for the Whitmer campaign commented: “We plan to appeal this disappointing decision and we fully intend to beat back these irresponsible partisan attacks against the Governor in the courts, on the streets or at the ballot.”
Advertisement

“This is part of a massive and coordinated attack by Republicans trying to make the Governor fail and our campaign will strenuously oppose these efforts so the Governor can keep saving lives, reopening our economy and creating jobs.”

The petition gatherers will have 60 days to collect over 1 million signatures in the next 60 days for the recall to proceed. The clock is ticking, and getting the recall on the ballot appears to be a tall order.

The deadline has already passed to get a recall petition on the August ballot, but the deadline to get it on November 2021 ballots is July 30.

That’s also essentially the deadline for any of those petitions to go through, as the 2012 law does not allow governors to be recalled during the last year of their term, which would be 2022 for Governor Whitmer.

If the recall effort can Whitmer to ease senseless pandemic policies, then I will call it a win. Here’s hoping that Michiganders can get this matter onto the ballot.

For some unknown reason, Gretchen reminds me of the Wicked Witch of the West.

Maybe the wicked witch of the mid-west would be more accurate.

Mirror, mirror on the wall, who has the smuggest face of all?

But that’s the worst: she’s sadistic.

Both I and one of my adult children will sign.

A Trifecta of Progressive/ Marxist Governors who are all now on e verge of being removed from office. It cannot happen soon enough. The people are angry. If this were 1780 they would be tarred and feathered by now.

you should let your underage one vote to and any dead family members. .works for them

Good, get rid of the fascist b*tch.

Write that on her forehead.

It’s all coming out. And it’s BAD:

I adamantly refuse to watch political videos that are not accompanied by either a transcript or a detailed summary. If they’re that lazy, I will not reward it.

You sound like liberals who ‘won’t watch Fox News’.

She will always stick in my mind as the stupid Democratic bitch who closed her state’s nursries last spring. Yep, Progressives Against Vegetable Gardens, no shit. The media flew right past it, because “reporters” can’t even grow a houseplant, but trust me when I say that it got plenty of attention among gardeners, even out here in the Pacific NW.

Here you have a brain-dead fascist ordering people not to grow their own food, because groery stores are safer. I’m not imaginative eeenought to make that shit up. There’s nothing like the combination of arrogance, power, and stupidity.

Why bother. Lt. Gov Gilchrist is no better.

I think they understood that when they petitioned to recall both.

I wish them luck in their efforts, Whitmer has been an embarrassment for both Michigan and the nation, especially with that nasty business of trying to shut down that oil pipeline so soon after the hack that hurt the big one supplying the east coast. Do have a question: if she and Gilchrist are both recalled who replaces them for the time being until Michigan’s next election?

You are as clueless as Pelosi is on how normal people live.
Yeah, I go to a bar for a burger, and a grill for a beer.

The masks are coming off the intuitive effects of restrictive mandates, the plain effects of Planned Parent/hood, and the value of vaccines in a risk management protocol.

Gretchen is the she-male, she-wolf of the SS

There’s a reason she’s earned all her nicknames, among them Wretched and Witless. Maybe being in a Southern state that’s regularly ridiculed by the educated elite (read that educated fools) isn’t so bad. Our governor is the polar opposite of this woman in every way.