The Defense Department “will maintain the existing policy from July 2020 regarding the display or depiction of unofficial flags,” which includes the pride flag. 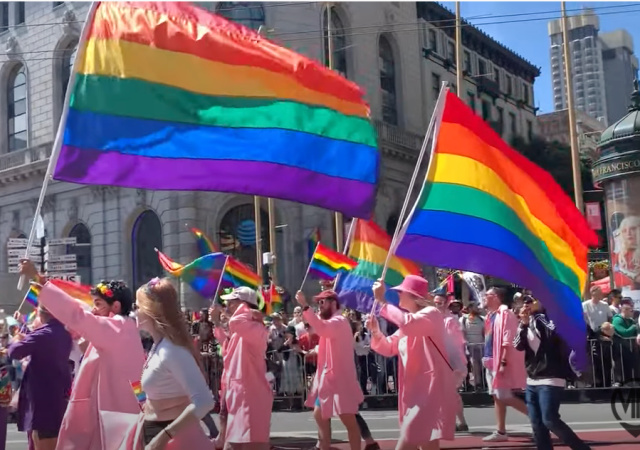 The Defense Department “will maintain the existing policy from July 2020 regarding the display or depiction of unofficial flags,” Pentagon press secretary John Kirby said Friday at a news briefing, confirming that “there won’t be an exception this month for the Pride flag.”

However, Kirby noted that the choice “in no way reflects any lack of respect or admiration for people of the LGBTQ+ community, personnel in and out of uniform who serve in this department.”

“We’re proud of them,” he added. Kirby explained that the decision was made to avoid challenges that could arise from making an exception to the policy.

Reports indicate Defense Secretary Lloyd Austin has no plans for a deeper review to make it more precise. No worries, though. Our intrepid Secretary of Defense will participate in Pride Festivities.

[Kirby] said that Secretary of Defense Lloyd Austin will join in Pride Month festivities at the Pentagon this week.

Austin “encourages all commands to likewise find ways to recognize the service and contributions of the LGBTQ+ community in defense of this nation,” Kirby noted in a statement.

“Flags are powerful symbols, particularly in the military community for whom flags embody common mission, common histories, and the special, timeless bond of warriors,” then-Secretary of Defense Esper wrote in a memo regarding the policy. “The flags we fly must accord with the military imperatives of good order and discipline, treating all our people with dignity and respect, and rejecting divisive symbols.”

In addition to the American flag, service members and DOD employees are currently authorized to display only flags of U.S. states and territories, military service branches, general officer flags, civilian flags appointed by the President and confirmed by the Senate, the POW/MIA flag, flags for U.S. allied or partner nations, flags of global organizations with U.S. membership such as NATO, Senior Executive Service (SES) and Military Department-specific SES flags, and flags or guidons associated with ceremonies, commands, units, and branches.

All other flags not specified in the memo remain banned from military installations.

It is important to note that last month, Ramstein Air Base removed a photo of uniformed airmen flying a pro-police “thin blue line” flag during a 24-hour ruck march held in honor of National Police Week. The base apologized for the move and said the photo violated the Defense Department policy the flag policy.

I’m pleased. I’m “G”, but find nothing note to celebrate about it than celebrating being left-handed or cross-dominant.

Enough with this nonsense!

There was a time, not long ago, when gay people were taught to be ashamed of themselves, were treated by society as objects of shame, and had a genuine need to assert their pride. “Pride” in this context does not mean arrogance but defiance; it means a lack of shame, a refusal to accept the stigma that society wishes to attach to one. “We’re here, we’re queer, get used to it.”

There was also a time, a bit longer ago, when left-handed people were made to feel shame, and their parents and teachers tried to force them to be right-handed, harming them. At that time a left-handed pride movement would have been justified and useful. By the time such things became possible the stigma on left-handedness had mostly disappeared, so it was unnecessary.

The same applies to black people, who also had to fight a stigma; Gay Pride pretty much copied Black Pride, and we still have parades and celebrations to remind us that there’s no reason for black people to feel uncomfortable in their skins.

The gay rights movement has achieved its legitimate goals, and is now redundant. The associated Pride movement is still needed, somewhat. So long as closets are still common, Pride will still have a legitimate role. But that need is much less than it was 50 years ago, and its activists ought to recognize that.

Also Irish, Scottish, Polish, Spanish, Chinese, Japanese, et al… There is no ethnicity that cannot be broken down into smaller ethnicities until you have an individual, and there are no individuals who don’t have at least a *perceived* bias against other individuals (including but not limited to people who zoom ahead in a Left Lane Closed road construction area so they can wedge themselves up ahead, but I digress)

I’m proud of myself. I don’t need a colorful flag to express that. I’ve got one in red, white, and blue that I put out in front of my house this morning.

11 Italians, Milhouse. What’s your point? I should hold a grudge against this country? A country is like a woman. She’ll never be perfect. But you love her anyway.

You people in Kali. You best bow your head when you pass Basilone Road, Camp Pendleton. Yes, I’m Navy. But I was trained by the Marines. And in any case some things surpass service rivalry.

How would everyone feel about the Pentagon ordering the Gadsden flag be flown? Why isn’t the US flag enough? It is what we are supposed to be unified around as a nation. Of course, everyone is also united around the Red Sox so that would be okay.

You must have missed this part:

In addition to the American flag, service members and DOD employees are currently authorized to display only flags of U.S. states and territories, military service branches, general officer flags, civilian flags appointed by the President and confirmed by the Senate, the POW/MIA flag, flags for U.S. allied or partner nations, flags of global organizations with U.S. membership such as NATO, Senior Executive Service (SES) and Military Department-specific SES flags, and flags or guidons associated with ceremonies, commands, units, and branches.

So the US flag is evidently not enough. There are all sorts of flags that the Pentagon does fly, or allow to be flown. But not just whatever someone wants. Each of these has a specific justification. Random flags aren’t allowed, and there’s no legitimate reason to make an exception for this one.

Of course, “unofficial” flags could also include a MAGA flag. They couldn’t risk allowing that!

This a good decision. We are supposed to one nation, swearing fealty to one flag. Flying any other flag would be considered separatist. That’s why I call the LGBT movement a separatist one in that everyone is marching with that flag and so many corporations are showing fealty to that flag as if it is more pertinent than the American flag.

Um, no. See my reply to Pasadena Phil. The Pentagon does fly many flags, and allows many more to be flown. There has never been a time when only one flag was allowed or encouraged. But that doesn’t mean anyone can just fly whatever flag they like. This is still the army, Mr Jones, not Liberty Hall.

That’s the Pentagon. This ban applies to military bases and installations. In addition, all of July is not dedicated to swearing fealty to the American flag and the country despite July 4…all of June is dedicated to “pride” and that flag.

Spineless Joe Biden will have this policy overturned before the week is out.

Well, that’s his privilege, I suppose. But let’s wait and see before jumping in. Maybe saner counsel will prevail. Who knows what goes on in his head, at any given moment?

So, no parade of lions, lionesses, and their unPlanned cubs in the military. No celebration of the transgender spectrum under a banner of inclusive exclusion.

They could present a banner featuring a lion, lionesses, and their [unPlanned] cubs that would celebrate a unit and unit cohesion. I wonder if the military has removed feminine female symbols that were once used to boost morale. Women and men, couples, and children, several outdated, nominally social constructs.

Sorry if I am being too graphic. But the times require it. It’s just that weird. And no. I also like women, without penises. I’m just now realizing and thanking Pelosi for all these allies.

Thank you, Chuck Schumer and Nancy Pelosi, for importing all these Catholics.

Now all we have to do is get to them and tell them what they want to do to their kids.