PA already received 100,000 doses of the Pfizer vaccine. It is also common knowledge the vaccine has a short shelf-life lasting not more than six months. 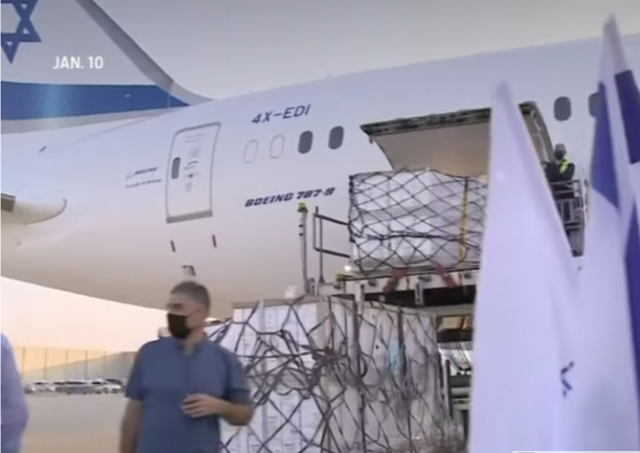 On Friday, the Palestinian Authority rejected an Israeli offer to supply up to 1.4 million Pfizer vaccine doses to support its fledgling coronavirus vaccination program. The rejection came after the PA already received 100,000 doses, news reports confirm.

The PA leadership rejected the Israeli offer under the pretext that the promised vaccines would expire in a month or two. According to Israeli officials, the shipped vaccines expire by the end of July. This is nothing unusual. The coronavirus vaccines have a short shelf-life, lasting not more than six months.

The Israeli offers came less than a month after Gaza-based Hamas and other Palestinian terrorist groups fired more than 4500 rockets on Israeli towns and cities.

The Palestinian Authority on Friday evening dramatically announced that it was canceling a deal in which Israel would supply it with some 1 million Pfizer vaccine doses to help with its floundering coronavirus vaccination campaign.

The PA said the doses, which Israel began shipping to the West Bank on Friday, are too close to expiring. However, Israeli officials insisted they were fine and should not be wasted.

“The professional teams in the ministry found that the vaccines we received today from Israel did not meet the specifications, so the government decided to return them,” said PA Health Minister Mai al-Kaila.

However, after some of the vaccines had already been transferred to Palestinian possession, Prime Minister Mohammad Shtayyeh announced late Friday that he was canceling the shipment because they are expiring soon.

Israel, however, said it had given the Palestinians that information.

Israel made a generous offer in light of PA leadership’s failure to roll out a proper vaccination program for its people.

The Oslo Accords signed by Israel and the PLO in the 1990s dictate the PA is responsible for the vaccination of the Arab population under its authority. The situation is complicated as Islamic terrorist group Hamas holds power in Gaza, thus cutting it off from PA control.

On the other hand, Israel has been ahead of most countries in vaccinating its population, including the Arab Israelis. “Israel’s mass vaccination drive, which has already given both shots to over half the population, along with lockdown measures, brought down the number of new daily cases (based on a weekly average), from 8,600 at the peak of the health crisis to just 13 on Wednesday,” The Times of Israel reported Friday.

Friday’s move is the latest example of Arab Rejectionism, which has plagued Palestinian politics even before establishing the Jewish State in 1948. Ordinary Palestinians have been the biggest victims of this stance, which has dragged them repeatedly into disastrous wars with Israel and has perpetuated a culture of jihad and antisemitic incitement, which continues to poison the minds of Palestinians growing up under the PA and Hamas control.

I’m surprised that the Palestinians were smart enough to refuse these dangerous experimental drugs.

“”Ordinary Palestinians have been the biggest victims of this stance””

And you can bet your bottom dollar that all of the Palestinian leadership and terrorist leaders have gotten vaccinated and won’t be affected by covid. But they certainly don’t give a flying fuck for the general ordinary Palestinians. Let ’em die of covid and they’ll use that as just more propaganda against Israel. Don’t you doubt it.

One of the worst cultures in the world again demonstrates it is among the worlds least valuable.

I guess India will be glad to take the vaccines.

There is no Palestinian “culture” besides claiming victimhood. They came from Egypt, Jordan, Syria, Tunisia to be victims and gosh darn it they are going to refuse any peace deal and every offer of help from Israel to make sure they stay “victims”.

Palestine is proof positive why we can’t give into victim culture (CRT, etc.) in the US. There are a group of power-seekers that seek to remain in just enough power by splintering off factions of people with wedge psychobabble and maintaining their perpetual victimhood status.

Victimhood becomes an addictive drug by which its chronic abusers can take no responsibility, never fail by never trying to succeed, and continue to be a parasite on society for the rest of their natural lives. It also leads to collective misery both for the “victims” and the responsible party that becomes laden with the fiscal responsibilities for the indigent addicts.

I sort of agree, they are low life, and they are also a welfare state, much like our inner cities. I cannot understand why Israel continues to give them anything.

the vaccines were given to Israelis and used.

It doesn’t benefit their leaders to accept the shipment.

Their leadership most likely already have gotten vaccinated. They simply don’t give a flying fuck about the general population. They’ll die of covid and will be used as just more propaganda fodder against Israel and it’s supporters. Guaranteed.

The vile Dhimmi-crats will still find a way to blame Israeli Jews for the Arab Muslim, so-called “Palestinians’ ” childish belligerence, supremacism, totalitarianism, hatred and self-inflicted miseries, as sure as the day is long.

Whatever. If they want to refuse that’s fine. But the palis and their advocates better not start whining and whinging about how Israel is using the SARS-CoV-2 virus to commit genocide and other atrocities. You palis had the chance to get vaccine, you refused, any covid deaths are on you and not Israel.

They refused them because it allows them to claim that they were tainted.

Why? Because that’s EXACTLY what they would actually do if the roles were reversed.

Why does Israel even bother?