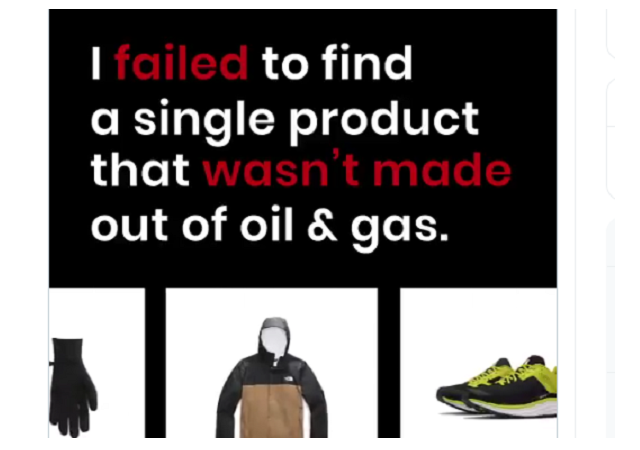 It seems that everyone is getting more than a little tired of the joyless, everything is a crisis and everything sucks, holier-than-thou leftist scolds who jump at every chance to virtue signal.

When Texas-based Innovex Downhole Solutions placed an order for jackets from North Face, a notoriously “woke” outdoor apparel company, their order was refused. Because fossil fuels.

Liberty Oil and Gas’ CEO Chris Wright decided that it’s time to push back on behalf of the oil and gas industry and did so in a way that is reminiscent of the Consumers’ Research team’s recent spate of ads targeting the CEO’s of woke companies.

The more you know… pic.twitter.com/iK87BviBOW

The Federalist has more:

North Face claims to be a company that is “sustainable from start to finish,” but Liberty says the clothing company creates products that likely use at least 90 percent oil- and gas-related fibers, which is far more than the 60 percent global average.

“The great majority of North Face products — jackets, backpacks, outdoor pants, shirts, shoes, hats, etc. — are predominantly made out of the oil and gas that we so proudly produce,” Wright said.

And Wright is not just posting some random ad on Twitter; he’s going all-in to expose the “crazy hypocrisy” of North Face. He’s got a website and is spear-heading a billboard campaign, as well.

Chris Wright, the CEO of Denver-based Liberty Oilfield Services, is spearheading the campaign by putting up billboards around North Face’s Denver offices and launching a website and social media campaign, dubbed “Thank you, North Face.”

The idea for the campaign started after North Face denied an order of jackets to a Texas oil and gas company reportedly because the popular fleece maker did not want its outdoor brand affiliated with the fossil fuel business.

Now Wright is trolling the company in Denver by calling out how many North Face jackets, backpacks and clothing products are made from oil and gas.

There’s “no chance that North Face could exist as a company or an organization without oil and gas,” Wright told Fox Business Thursday.

Fossil fuels are needed to make the petrochemicals that are used in the plastics, nylon, climbing ropes and more that North Face sells, Wright says. Oil and gas products fuel the factories that manufacture the goods. And fossil fuels are the backbone for shipping North Face products around the world.

So when North Face apparently shunned the oil and gas industry by reportedly refusing to fulfill the jacket order for Texas-based Innovex, Wright said the move was the height of “crazy hypocrisy.”

. . . . The seven billboards are going up around the Denver offices of the VF Corporation, the North Face parent company. One billboard says: “That North Face puffer looks great on you. And it was made from fossil fuels.”

Wright says he hopes the campaign will spark an honest conversation about the role fossil fuels play in the economy as well as climate change, which he says is real. And maybe driving by the billboards will give North Face employees a chance to reflect on how the oil and gas industry makes their lifestyle possible, from the jacket they wear to the kayak they took out last weekend.

It’s good to see this kind of pushback against the left’s decades-long, one-sided narrative that singles out an industry or entity, isolates and demonizes it . . . all while benefiting from, often even profiting quite handsomely from, that industry’s products.

Maybe gun manufacturers can start a campaign singling out elite leftists in the media, Hollywood, and the Democrat Party who regularly demonize their industry yet not only own firearms but hire armed security for themselves while they watch their cities burn and murder rates skyrocket.

It’s probably too much to hope that the Republican Party will step up and finally start defending not just its own principles and policy agenda but America as an exceptional nation undeserving of the divisive, racist attacks and seething hatred coming from the opposition party and its assorted media, Big Tech, Hollyweird, SJW, and corporate anti-America colluders.

One of my favorite lines of Wright’s video is his stating that his company “proudly produces” the products that North Face could not exist without. Wouldn’t it be marvelous if the GOP were as openly proud of America, of her people, of her actual history, and do more to defend her? A girl can dream.

Finally! This should be standard practice — call out the hypocrisy, mendacity, and utter stupidity of the left.

Alinsky — Ridicule is man’s most potent weapon. There is no defense. It is almost impossible to counterattack ridicule. Also it infuriates the opposition, who then react to your advantage.

“He’s got a website and is spear-heading a billboard campaign, as well.”

I did this many times. He should add a moderated comment section, only posting comments which are in line with the website mission.

Maybe gun manufacturers can start a campaign singling out elite leftists in the media, Hollywood, and the Democrat Party who regularly demonize their industry yet not only own firearms but hire armed security for themselves while they watch their cities burn and murder rates skyrocket.

That’s one strategy, Another is for manufacturers to “Barrett” them — refuse to sell to or service firearms for any federal, state, or municipal entity that bans those same firearms to the general public.

North face keeps stepping on the flaming bag. They did the same thing on abortion and the CEO with all the brains of a door stop never figured out why there was pushback.

The only item I’ve been buying from North Face is their tech t-shirts because of the fit and comfort. There is no way to make tech t-shirts from cotton or other natural fabric and I doubt any of us would buy them. The tech t’s wick and evaporate sweat very fast and last a long time. But it is not an exclusive fabric to anyone so they have plenty of competition. And I’ve already found more comfortable alternatives.

They are making a very big mistake by assuming that the athletic crowd is solidly woke. We are not. This is going to hurt them. They either have to own up and apologize or abandon the products that makes them successful. I don’t know of many people who return to wearing cotton.

North Face should probably be more worried about the woke crowd – they may suddenly start questioning the company’s products, whereas the non-woke customer base will likely just laugh this one off.

If Wright can get this to go viral within the woke twitter-verse, North Face could be in for a hell of a rough time.

I think that many non-woke customers are done laughing stuff off and realize that we cannot be complacent any longer. And that means supporting with our money companies that hate our guts and wish we were dead while we cheerfully ‘laugh this one off.’ Yeah, that hasn’t worked so well, has it? What is happening to our great country and to our very socio-cultural identity is not funny, and I am not laughing.

Neither am I, I think that the time is fast approaching that things are going to become uncivilized.

What we need is a comprehensive and detailed list of the companies. I tend to be God’s own non-boycotter, but there are exceptions.

Once people finally get to know how indispensable petroleum is for just about everything we use, the politics will change drastically. Otherwise, we are heading back into the 17th century except this time, whale oil and kerosene (pine tree product) are not going to be allowed either. Literally a return to the dark ages.

One of the things I queried countless professors (in a range of fields) about back when I was in college was how on earth humanity managed to move backwards from a golden age of Greco-Roman intellect, republican government, and pretty astonishing advancements in everything from plumbing and irrigation to art and literature to the dark, dank, dangerous Middle Ages marked by mass illiteracy, poverty, ignorance, filth, and wide-spread human suffering. No one seemed to know. I suspect we are seeing in real time exactly how that happened.

A great deal of what propelled our current civilization was been Jewish discovery and invention.