South Kingstown Mom Nicole Solas: “They smear people who ask them questions, who disagree with them”

South Kingstown Mom Nicole Solas: “They smear people who ask them questions, who disagree with them”

“[T]he chair of the school committee should resign immediately… And it’s just a false accusation of racism that they use to bully you into silence…. And if this is any indication of what’s going on in my school district, our town is in deep, deep trouble.” 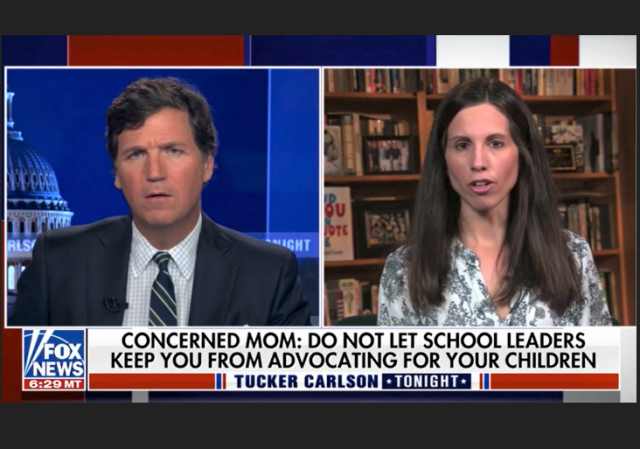 Nicole Solas is the mother whose child is enrolled to enter kindergarten in the South Kingstown, Rhode Island, school district, and has been in the news after the School Committee threatened to sue her for filing a series of public record requests concerning Critical Race and Gender theory in public schools.

The story broke on Legal Insurrection on June 1, 2021, when Nicole went public with what was happening, I’m A Mom Seeking Records Of Critical Race and Gender Curriculum, Now The School Committee May Sue To Stop Me.

We also covered the public forum last night at which the School Committee voted not to sue, and directed it’s counsel to try to resolve the dispute through mediation, South Kingstown (RI) School Committee Votes NOT To Sue Mom Nicole Solas Who Sought CRT Records

In that post I noted particularly outrageous comments to the Providence Journal and in a Facebook post (archive) by the Chairwoman of the School Committee, Emily Cummiskey, about Nicole and the group called Parents Defending Education, which Cummiskey labeled a “nationally organized racist group.” I wrote:

At the School Committee public session, Cummiskey repeated the claim, specifically mentioning Parents Defending Education. One of the audience speakers indicated that simlar contents were in a mass mailing to town residents, though those details are unclear.

Nicole appeared on Tucker Carlson Tonight this evening, and the issue of the smear came up, although fortunately they did not include mention of Parents Defending Education. (Legal Insurrection got a nice shout out from Tucker.)

Well, you know, that is a patently false, outrageous defamatory statement that should be retracted. And the chair of the school committee should resign immediately. But you know, this is what they do. They smear people who ask them questions, who disagree with them. And it’s just a false accusation of racism that they use to bully you into silence. They reduce everyone down to the color of their skin and for human beings worth is more than that. And if this is any indication of what’s going on in my school district, our town is in deep, deep trouble. This is exactly why I was submitting my public records request to get information about how exactly this is being taught in our schools. And then they turn around and have a public meeting to discuss, suing me for submitting the public record requests, which they told me to do.

Hopefully, this is THE case that triggers the “legal insurrection” required to empower parents to stop the Marxist takeover of our schools happening across the country. I know of one case first hand where parents with a special needs child are being bullied for asking questions.

Schools make a big show of supposedly trying to help special needs children, while often doing their best to avoid what should be done. I have one whom they claimed had it a plateau, was in 8th grade and still reading at early 1st grade level, I hired a special ed teacher for 6 hours a week over a summer, the child was reading at 2nd grade level by the end of the summer, I continued tutoring for 3 years year around and the child’s reading improved by 1.5 grade level per year. The problem was not that the child could not learn to read, it was the school weaseling.

Their failure to properly address the reading issue left her way behind. I spent about $30,000, and today, now an adult, a book in hand all the time.

Trusting the school to do right was a huge error on my part.

DO NOT trust schools to do right by a special needs child. Find an advocate who understands the system.

Public Schools have their own goals that get in the way of doing the correct thing for the student.

I know a couple who were born in China and had three children. Although their children were fluent in English, the Chicago Public Schools wanted to put the kids in bilingual education. Apparently, they wanted more bodies to enter the program.

All three kids are graduates of one of Chicago Public Schools’ elite high schools.

With hundreds of stories just like yours, I always ask myself: why on earth would anyone send their child to a public school. The lady in this story has a kindergartner. How many years will it take to change the mentality of those in charge of teaching these youngsters. I wouldn’t allow them to babysit let alone teach my child anything.

Lots of folks don’t have much of a choice.

Which is why School Choice is so important. When the $$ are attached to the kid that can go where the parents want them to go that is when we will be able to change Public for Political Indoctrination camps and back to places of education.

I hope this doesn’t highjack the thread, but people reading the comments may want to watch the video linked below. Another brave woman, this one from Carmel, NY, aggressively confronts her school board about this garbage indoctrination effort.

The normals are finally pushing back.

Wow great video. Need more of those. So many people feel just like she does. Time to hold them accountable. Let them eat cake!

She needs to start a recall of the school board, seat a new school board, and then fire the superintendent. Identify rabid CRT people on staff, and replace all of them.

She seems to be driven by raw rage, understandable, there is nothing that pisses off people more than messing with their children.

fightforschools.com is accepting donations to fund a recall drive for members of the Loudon County VA school board, on these very same issues.

Many of us LI readers are nowhere near Loudoun, and/or are old f*rts who can no longer tramp sidewalks and wave signs, but put a checkbook in front of us, and we can be Jascha Heifetz.

This video and this lady should be featured on LI. She is a brave warrior against crazy CRT.

Absolutely! My hometown school board is 100% dysfunctional. It is time for two countries.

Most school board members get elected because the teachers campaign for them. It is little wonder that they represent the teachers over the pupils and parents.

The liberal playbook:
1. When someone disagrees with you, call that person a racist.
2. See step 1.

Look at how the media disingenuiously distorts CRT and makes it seem that conservatives are racist for opposing “anti-racism”.

As I have said in prior posts – the Progressives purposely choose names like BLM and “anti-racism” to promote their propaganda by making opponents look out-of-touch.

In reality, terms mean something very different from what they imply. BLM is Marxism that uses black deaths to promote their agenda. CRT anti-racism is neo-racism.

I would like to understand how school boards work and how hard it would be to get the right people on them.

Pull a group of like minded people together, identify those who are willing to run for the school board, initiate a recall.

Any citizen in a city or town can run for school board. You just have to follow the nominating procedure. It usually involves collecting some signatures. People who run for the school board are often people who have a gripe with the schools. Often that gripe is related to one issue that affects their own child. While they may have become well-versed in that issue (or maybe not), they usually know very little about what it takes to keep a school system running. One of the things folks both on and off the school board seldom take into consideration is there is a finite budget for the schools. When one program gets increased funding, another program will get cut. Load the board up with people who have special needs kids, and the next election the candidates will come from the Band Parents Association. Local elections don’t get a very large turnout, and in a small to medium sized district, the winners often take their seats on the board by a couple of dozen votes. “Getting the right people to run” involves recruiting them and then helping them campaign.

A school board prepares the school budget, negotiates the teachers’ contracts, sets systemwide school policies, and hires and fires the school superindent and his underlings. Whether they have input into hiring school principals varies from town to town. They seldom have a say in hiring individual teachers, but through the budget process they do have a say in the teacher-to-student ratio. They hold meetings at least monthly, and unless what they’re discussing is covered under the rules for holding “executive sessions”, all meetings must be open to the public. They don’t have to allow the public to speak, but there is usually time set aside at every meeting for public comment.

Does that answer your questions? 🙂

The problem is teachers’ unions, with their funding pipeline tapped into taxpayer funds (via payroll withholding from teachers) can effectively control the elections of school board members. An organized community group might be able to get one or two members elected, but with funding from the unions it is nearly impossible for for concerned parents to wrest board control from them. The PTAs are co-opted too, and a large number of parents assume that teachers and PTA put children’s’ interests first. But they don’t, they put the union agenda first, and most local unions are fully aligned with the national unions that are fully aligned with the progressive democrat agenda.

What I saw in a Canadian elementary school was that kids were be sold on Trans stuff as it being the cool, the in thing. This is being pushed at the puberty age, when kids are going through that turbulent stage. It is not surprising that they are uncertain at a time when their bodies and hormones have not finished their job.

Please provide sample queries so that other parents can know how to zero in on exactly the right records to request of their own school districts.