“The mere words ‘I’m offended’ are now being used as an excuse to silence students, fire professors and cancel people simply because they do not know the popular line of thought.” 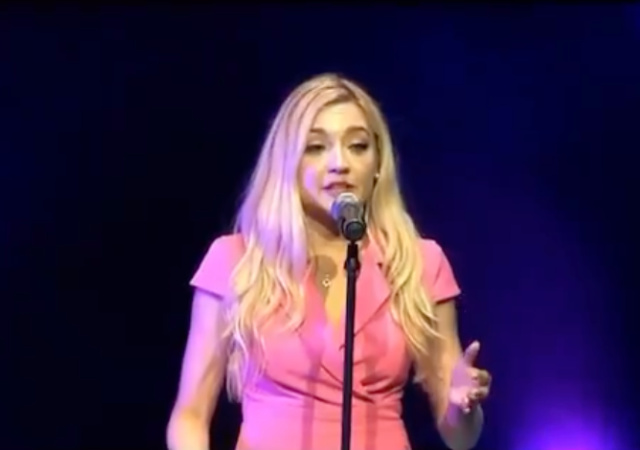 “Our generation is experiencing an epidemic of censorship and entitlement. And it’s because our professors and our celebrities are teaching students to be narcissists, to believe that any of you that differs from their own is an existential threat,” she said in a video posted to Twitter of the competition.

“And this is what I experienced on my own campus with censorship to the point where people believe that speech is violence so that they can threaten other people with violence, simply because they disagree with them.”

“It is listed first under the Bill of Rights for a reason. Without it, all other liberties crumble. But today, we’re watching free speech get hammered to the ground by the very institutions that are supposed to promote diversity of thoughts,” she said.

Murray concluded, “And that’s what I experienced – an Orwellian phenomenon, dominating my own campus to the point where it got borderline violent.”

This was my onstage interview for Miss New Jersey. I didn’t win. I didn’t even place. But I wouldn’t have changed a single word.#FreeSpeech #AntiPCPageantQueen pic.twitter.com/zvoJ3CAWRa

Murray’s LinkedIn account has videos of her interviews, including about the death threats she received at school.

Wow!!!!
We have another brave hero!

She will be. She will be held up as an example of the racism inherent in the system of white supremacy and privilege. How Dare she advocate for diversity of thought!

That is one brave girl.
Bravo!

She is fantastic. She will have an awesome future. Objective truth, logic and reason are all under assault by the woke activists. People that still think will be leaders of the moronic followers. There’s a backlash coming.

They won’t lead the moronic followers; if they are very lucky, they’ll leave them far behind them so as not to foul their own propellers.

And New Jersey of all places. Gives you hope that something good occasionally comes out of Nazareth

What an extraordinary young woman. Courage in the face of diversity (thought, not color) and adversity. Right on liberty for all. Following the principles and spirit embodied in our conservative philosophy.

What a weak response to her speech. You know they were pissed

Now I understand why beauty pageant finalists are not too bright—they’re not allowed to be.

. And it’s because our professors and our celebrities are teaching students to be narcissists,
——————-
Mom and Dad’s cell phones were the beginnings, those others just ramped up the wattage.

I don’t think that’s a fair comment at all. She is clearly passionate about what she says and there is a debate about the nature of cancel culture etc. Free speech is a foundational principle of any functioning democracy so I applaud her for that.

Definitely not homely. Your “dumb” is my “brave”. She’s doing the right thing, even if it’s a much harder road to travel than shutting up and being persecuted.

Jewish, hot, and conservative. I think I’m in love.

she isn’t saying “don’t know the current” if you listen to her it is they do not TOE the current…just saying transcription is incorrect.