The number doesn’t include the 6.6 million who were “not actively looking for a job during the last 4 weeks or were unavailable to take a job.” 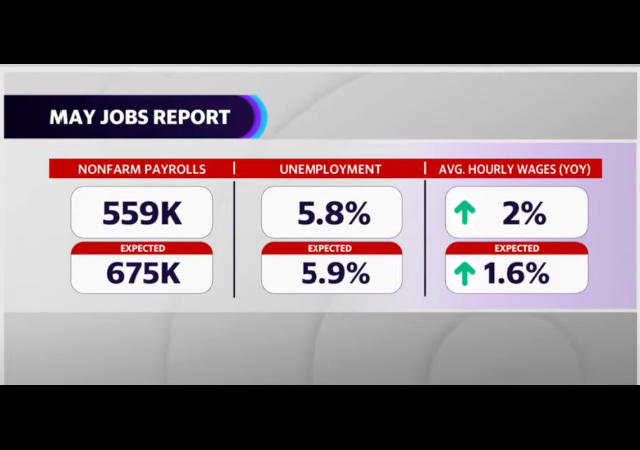 Good: The economy added a healthy dose of jobs.
Bad: People do not want to work.

So 9.3 million people are still unemployed. But, first, let’s look at the labor participation rate (emphasis theirs):

Another interesting nugget (again, emphasis theirs):

In May, the number of persons not in the labor force who currently want a job was essentially unchanged over the month at 6.6 million but is up by 1.6 million since February 2020. These individuals were not counted as unemployed because they were not actively looking for work during the last 4 weeks or were unavailable to take a job.

The last sentence: “not actively looking for a job during the last 4 weeks or were unavailable to take a job.”

Gee, maybe it’s because the government is paying people to stay at home?

Those who were unavailable to take a job could be women forced to stay home because unions kept schools closed?

The job reports are too vague. I need more details:

Economists have pointed to a variety of other factors that could be contributing to constrained job growth. Those issues include some workers’ concerns about contracting the coronavirus, child-care responsibilities preventing some parents from returning to work, and a federal supplement for recipients of unemployment benefits.

Nick Bunker, economic research director for North America at the jobs site Indeed, said those constraints are likely to ease in coming months as additional Americans become vaccinated, schools more fully open and the federal supplement ends broadly in September. Taking those factors together, the labor market could reach an inflection point in early fall because more workers will likely be available, Mr. Bunker said.

“It’s a bit like a rocket where takeoff has been slightly delayed, but takeoff will still happen,” he said.

A few states with Republican governors said they would stop “the federal supplement to unemployment benefits earlier than the scheduled expiration.” They hope it pushes people to return to work.

But some jobs have changed how they operate:

Carol Galle, chief executive of Special D Events in Detroit, said she recently started efforts to recruit two or three new workers for her events-planning business. Activity dried up at the company last year as conferences, trade shows and other events were canceled because of the pandemic. Ms. Galle said inquiries for her company’s services have picked up again with the economy’s reopening.

Ms. Galle said she has found it challenging to hire currently because many events professionals moved on to other forms of work during last year’s economic downturn. Other potential workers, she said, are requesting higher pay compared with before the pandemic because the work has become more challenging. For instance, planners must coordinate virtual events that are technically complex or events that have both virtual and in-person components.

“People in my industry understand that the job has changed and they need to have additional skills and they want to be compensated,” Ms. Galle said. “They’re worth it. It’s just a matter of being able to still run my business profitably and pay people what they’re worth.”

Every true economist knows this administrations fiscal policies are leading the USA over a cliff.

“Woke till we’re Broke” is the best way to sum up the Biden-Harris policies. Biden will be remembered not as the next FDR but as the next Jimmy Carter. Stagflation is coming and it will wipe out $ buying power.

Like everyone else in society, economists are afraid to speak up because they will be attacked by media and Progressives. This is what happens in a society that has a chill on free-speech due to certain special interests that do not want the truth to be known.

Unfortunately, people probably will remain quiet and docile until the coming economic crisis finally wakes them up. American public is short-sighted and complaisant and the Dems like it that way.

How much of the 600K is due to Republican Governors cutting off the gravy train?

and it still came in under expectations but most sites are calling it strong. Had any Trump quarter missed by 40% (supposed to be 1 million) it would have been portrayed as the sky is falling.

I will predict right now that next month they will quietly revise that 600,000 number down. That occurred regularly when Obama was president where they would announce one set of numbers one month only to revise them down a month later.

Not to mention that many who are working from home ow, want to work from home.

I don’t blame them, less distractions at home.

I first entered to workforce under Cater 1. Jobs were hard to find at that time. Now you have to kick help wanted signs out of the way to get into a business.

Biden will hoop, holler, and collect high fives from the press for a .3% drop and all will celebrate like he just worked a miracle.

Not surprised by a 112k miss below forecast. Labor force participation rate is flat and likely to remain so. Mostly as a function of folks coming off the sidelines and looking for a job.

That said, the self inflicted headwinds of extended timeline to receive unemployment and the extra benefits is damaging to the overall numbers and the economy. IMO, the negative press and r efforts to highlight this will result in a cliff when benefits expire.

So First quarter of fiscal 22, beginning October 1st, will see much improvement. The real issue is that the lag effect on economic growth where the newly employed spend which creates demand which creates additional hiring is being deliberately pushed into FY 22.

By then the inflationary aspects of the $6 Trillion spending spree and potential tax increases will be impacting the economy, so it may be too little too late as those cancel out some or all potential economic growth.

In any event the d/progressive will have a poor economy to run on in 2022, IMO.

Question: is the CDC in charge of the jobs report? /sarc

Maybe it’s because business owners pay their slav… employees starvation wages instead of the whole “they’re just a bunch of deadbeats” position you Trumptards automatically take because of course you do.

Any prudent employer pays employees in direct proportion to the amount of skill and productivity each employee demonstrates. The rate of compensation is further impacted by the costs or lack of costs in replacing that employee.

Did you have any specific proposals to offer or, did you intend to yet again, simply hurl nonsense and insults?

CommoChief: Any prudent employer pays employees in direct proportion to the amount of skill and productivity each employee demonstrates.

Actually, employers pay as little as possible to hire from the pool of workers with the necessary skills. If employers paid based on productivity, then worker pay would have increased much more than it has over the last few decades.

You should learn some skills, Chuckles. No need to project your many inadequacies at LI.

This is what happens when you have dementia-ridden, communist pedophile retard in office.

“The unemployment rate for adult women and adult men hardly changed in May. Men’s rate is 5.9%, and women’s rate is 5.4%.”
Wait, the media was telling me women were being hit hardest by the down economy.