Did the disinvite come over supposed threats of violence or absence of a Palestinian food truck? Make up your minds, Sunflower Philly and Eat Up the Borders. 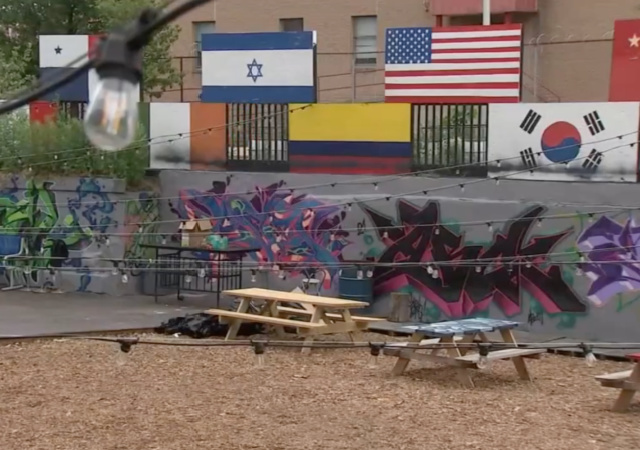 Organizers of a Philadelphia food truck event, Eat Up the Borders and Sunflower Philly, had to cancel the event after they received intense backlash when the public discovered they disinvited an Israeli food vendor.

Moshava, the food truck, said Eat Up the Borders pulled invitations due to fears of protests due to their Israeli ties:

We are deeply saddened by this. The organizers of the event heard rumors of a protest happening because of us being there and decided to uninvite us from fear that the protesters would get aggressive and threaten their event. We were really hoping that the organizers @eatuptheborders and @sunflowerphilly would step up to the plate and defend local, small and immigrant based businesses, no matter where they are from (as per their so called “mission statement”) but By the looks of it fear, violence, and intimidation got the best of them.

We really do hope that in the future you don’t succumb to such antisemitic and dividing rethoric and keep true to your words of a safe environment for all religions and nationalities- not just all of them except Israeli and Jewish ones. 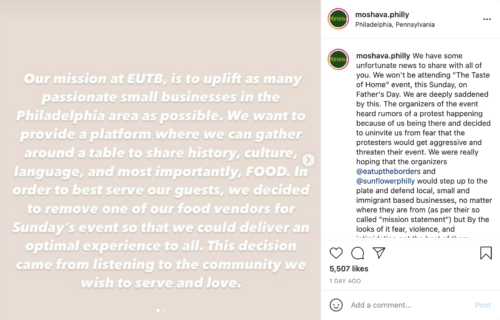 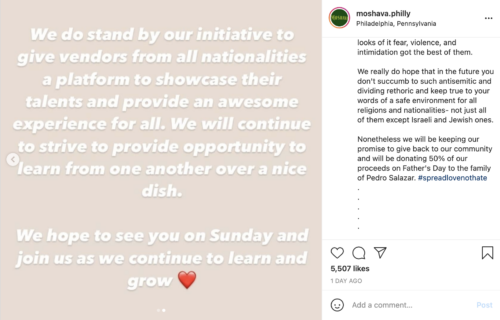 Eat Up the Borders made all of its social media pages private. Sunflower Philly wrote on Instagram: 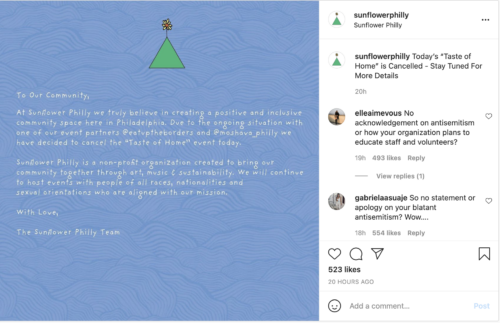 “No acknowledgement on antisemitism or how your organization plans to educate staff and volunteers?” asked @ellaimevous.

“So no statement or apology on your blatant antisemitism?” asked @gabrielaasuaje. “Wow.”

“Did you cancel any chinese food trucks?” demanded @nastywomengetloud. “I mean uyghur camps aren’t cool…but I guess since it’s not Israel’s fault you’re cool with it? The antisemitism is on full cruise control here. VILE.”

The decision “saddened” Democratic Rep. Brendan Doyle, who insisted an investigation if someone threatened the event:

That Moshava should be excluded from what is supposed to be an event showcasing food offerings from all around the world, solely due to their being an Israeli food vendor, is completely unacceptable. Given the disturbing rise in acts of antisemitism across our region and country, this decision by the organizers is only helping to embolden those who would use threats of protest or even violence to prevent any people, businesses and entire communities from living and operating freely without fear.

If the explanation of the organizers that Moshava’s invitation was revoked due to the threat of protests and violence is true, then I believe such threats should be investigated by law enforcement, as no person or organization should be coerced or threatened by the prospect of intimidation or violence.

I urge the organizers of this community event to stand up for Moshava and the right of businesses to operate freely, and to reverse its decision.”

The restaurant Moshava was supposed to take part in the event, but after word came of planned protests and threats of violence, Moshava was disinvited.

That decision resulted in a backlash, and that’s when the organizers decided to pull the plug.

“Our mistake this time, with not only our event partners, but in general was not educating ourselves. And not properly making sure that everyone is properly represented. So that’s where we made the decision to cancel the event,” said Melvin Powell, the executive director of Sunflower Philly.

However, Powell told NBC10 they disinvited Moshava because of a Palestinian food truck:

Melvin Powell of Sunflower Philly, one of the groups that organized the event, said at past food truck events both Israeli and Palestinian food trucks were present. He said an agreement was made in the past that one truck couldn’t be present without the other.

This year, the Palestinian truck couldn’t attend, he said. “The fact that we couldn’t accurately represent both of them is the reason why we canceled the event today,” Powell said.

Moshava Philly and the organizers have been talking since the controversy erupted.

Moshava put out a second Instagram statement saying they were working together to “educate and grow together in a safe space for everyone.”

“Although we were disappointed with how the situation was greatly mishandled, we do not believe the organizers intention came from an anti-Semitic place, but the threats they were receiving to their event were.”

The communist and anarchist goon-squads are so beneficial to the progressive left.

They can use them to intimidate conservatives.

They can use them to intimidate other leftists.

And heck, like we see here, they can even use the threat of them to justify their own anti-Semitism.

What CAN’T those masked goons do?

I’m reminded of a news article on the internationalized versions of Sesame Street I read years ago. The live-action segments with human actors are recorded for each market with local actors and regionalization.

The Middle East one fell apart because there were to be two streets – one Palestinian, one Israeli – and a park at the intersection that was neither, where the children would play. The Palestinian consultants insisted that every square foot of the set had be either Palestinian or Israeli; the Israeli consultants objected to one of the Palestinian characters having a background where he’d learned Hebrew after being held in an Israeli prison.

Good thing that was years ago because today entertainment media in this country would at best say yes if not suggesting more nasty things.

And I don’t think the explanation they are giving now makes things any better at all.

…at past food truck events both Israeli and Palestinian food trucks were present. He said an agreement was made in the past that one truck couldn’t be present without the other

“This year, the Palestinian truck couldn’t attend, he said.”

‘Our mission at EUTB, is to uplift as many passionate small businesses in the Philadelphia areas as possible.

Except the Jews. Screw those guys.’

A lot of people seem not to realize that while advocating BDS is perfectly legal, practicing it is not, at least if you are a public accommodation or an employer. It’s discrimination on the grounds of national origin.

That’s why the spate of recent court decisions against state laws requiring state contractors to certify that they don’t boycott Israeli businesses make no sense. These certifications are no different than the ones state contractors are already required to make that they don’t discriminate on the basis of race or sex, etc. They don’t prevent the contractor from advocating such discrimination, so there’s no first amendment issue.

It’s important to differentiate between anti-Israeli views and anti-Jewish ones. Criticism of Israel is legitimate and must not be suppressed.

Give the vile Dhimmi-crat Jew-haters and their Muslim supremacist/terrorist allies an inch of appeasement and kowtowing, and, they’ll take a mile. This is as axiomatic and as immutable as any law of physics.

Ok provide proof Philadelphia is a Muslim city, that the organizers are Muslims or knock of the religious bigotry.

This has everything to do with leftism and intersectionality and nothing at all to do with Islam.

All we have to prove is that Philadelphia is a Democrat city, and you even seem to stipulate that in your final sentence. The anti-Semitism and pro-Islam automatically flows from that.

Anti-Semitism is part of modern leftism (a privilege hierarchy is inherently anti-Semitic) but I don’t see where Islam is involved in this story.

The leftist world view is inherently anti-Semitic, there is no need to bring in phantom Muslims to explain leftist Anti-Semitism.

Not “explaining anti-Semitism with it,” just saying it’s part of the Democrat package. Perhaps I should have said “pro-Arab” instead. Palestinians are involved in this story.

Somebody need to eat them some Rocky Mountain oysters

They are definitely lacking any balls

The 2 takeaways for me from this:
Once again, the propaganda the left put out for decades has worked, in setting up the idea that the Jews took from the “Palestinians”.
And, that once again idiots imbibe the “well, if we let both sides in then we are being fair and just and virtuous.” Even if the other side doesn’t want to play.

Sad display. Any word on who was threatening to distrust the group? I let the FBI know and they will arrest some Trumpers if they can find any in Philly.

I’m going to apply next year as a Uyghur food truck. I’m going to demand that the Chinese trucks can’t show up unless I do. Then I won’t.

This will be the cheapest exercise of social guerilla warfare ever, I don’t even need to buy a truck.

Hey Congresswoman Brenda Doyle (D), how do feel about Antifa and BLM violence and cancel culture?