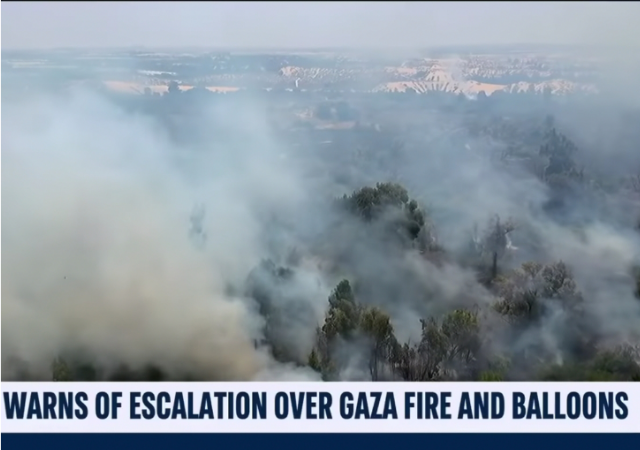 The Hamas’s arson offensive, which began on Tuesday, sparked dozens of fires in southern Israel. Twenty fires “broke out in the Eshkol and Sha’ar Hanegev regions immediately adjacent to the Gaza Strip throughout the day, which investigators determined were started by airborne arson attacks from Gaza,” The Times of Israel noted on Tuesday.

Hamas will bear the consequences for its actions. pic.twitter.com/lYhqfx26fm

The IDF struck a number of military sites belonging to Hamas in the Gaza Strip on Tuesday night in response to 20 fires sparked by incendiary balloons earlier in the day.

“The IDF is prepared for all scenarios, including the resumption of hostilities, in the face of continued terrorist acts from the Gaza Strip,” said the IDF Spokesperson’s Unit in a statement. (…)

The strikes come after dozens of Palestinians rioted and clashed with the IDF along the Gaza border on Tuesday, as tensions rose surrounding a flag march through the Old City of Jerusalem. (…)

Video from southern Israel on Tuesday afternoon showed large amounts of smoke in the border area due to the riots. The riots continued into the night as the Night Confusion Units in Gaza returned to operation, launching explosives and burning tires. One Palestinian was shot by the IDF during the riots on Tuesday evening.

This attack is not the first time Hamas has used arson attacks to terrorize Israeli civilians and devastate the environment. The jihadi group has an incendiary kite unit and had previously deployed explosive-laden drones to target Israeli communities across the Gaza border.

With this latest ecological terror offensive, the Islamic terrorist group Hamas appears to be testing the resolve of the newly formed Israeli government with Prime Minister Naftali Bennett at its helm. On Sunday, the Israeli parliament swore in a new center-right coalition government, ending Prime Minister Benjamin Netanyahu’s 12-Year reign.

The wave of arson attacks comes just weeks after a significant Hamas rocket offensive against Israel. Between May 10-21, the Gaza-based terrorist group and its jihadi allies fired over 4,500 rockets aimed at Israeli civilians.

The latest flare-up in Palestinian terrorism coincides with the Jerusalem Flag march, a traditional parade that marks the Israeli victory in the 1967 Six-Day War. On Tuesday, around 5,000 Israelis marched through the Holy City amid incidents of violence and stone-throwing by angry Palestinians.

Hamas is testing the new prime minister. Sticking their toe in the water to see what happens.

Bring the water to boil.

Stuck their toes in, got their asses blown off …

If they keep testing, maybe the conflict will be resolved by Labor Day.

And, the stupid, vile Dhimmi-crats contend that these Arab Muslim fanatics are people with whom peace can be made.

It occurs to me that Israel should adopt a policy of “Code of Hammurabi/Mirror Response” — every attack by the Arab Muslim, so-called “Palestinians” is repaid in equal kind. So, if Hamas fires 4,000 unguided rockets into Israeli, Israel fires 4,000 rockets back at Hamas. For every incendiary balloon sent into Israeli territory, send one back. Let the world’s dhimmi useful-idiots and Dhimmi-crats understand what it’s like to be under constant attack.

Israel often offers a peace plan that would recognize a Palestinian state, but it always rejected by the Palestinians.

There are a bunch of cruse shipps being decommissioned, Anchor them, lashed together in the middle of the ocean, deport those obnoxious people to their new state.

The Israelis are forming billion-dollar tech and biotech startups, while the Arab Muslim “Palestinian” terrorists are building attack tunnels, incendiary balloons and rockets — paid for with billions in foreign aid from U.S. and European taxpayers.

Yet, the stupid and vile Dhimmi-crats would have us believe that it’s the fault of Israeli Jews that the Arab Muslim “Palestinians” cling to a fanatical ideology of hate and supremacism, which causes a slew of self-inflicted miseries. How about holding Muslims responsible for their own wretched ideology, and, for their own belligerence?

Newser’s headline is “After Incendiary Balloons Launched, Israel Breaks Ceasefire”. I can’t fathom how they could write such a thing with a straight face.

The march in question takes place every year on Jerusalem Day, the anniversary of the city’s liberation from Jordanian occupation in 1967. The route it takes retraces the one taken by the army as it entered the Old City and made its way to the Temple Mount. This year it had to be postponed because of the rocket attacks, so it was held now instead. That is all.

It is no more “provocative” than a 4th of July parade; suppose Canadians decided to take offense at those and start shelling us in response!

What would happen if the ziti. Dome shot die. The balloons? Would they catch fire in Gaza? Probably too expensive to fight arson balloons with high tech.

Burn the Gaza strip to the ground. Problem solved.