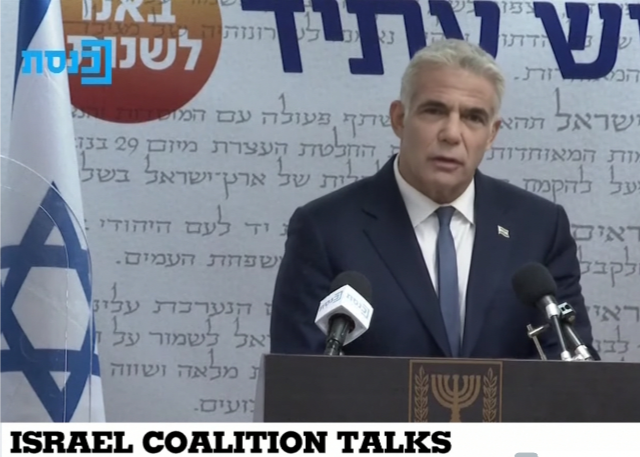 A broad coalition of Israeli political parties have formed a coalition in a last-ditch effort to unseat Prime Minister Benjamin Netanyahu. A bloc comprising of right-wing, centrist and Arab-Islamic lawmakers have reached the necessary majority in the parliament, Israel’s main opposition leader Yair Lapid informed President Reuven Rivlin on Wednesday.

“I have the honor to inform you that I have succeeded in forming a government. It will be an alternative government in accordance with [the Israeli constitution] and MP Naftali Bennett will be the first head of government,” the Israeli opposition leader said in a statement.

The Jerusalem Post reported the formation of the new coalition:

“I commit to you Mr. President, that this government will work to serve all the citizens of Israel including those who aren’t members of it, will respect those who oppose it, and do everything in its power to unite all parts of Israeli society,” Lapid told Rivlin at 11:35 p.m.

To form a government, the anti-Netanyahu bloc will have to prove the majority of 61 in a 120-seat parliament. The vote on the floor of the Knesset is expected in 11 days, giving Prime Minister Netanyahu a last opportunity to find a majority of his own.

They were not alone in their rejoicing. Many in the American leftist circles also took to social media to echo that sentiment. “Netanyahu, the master of creating divisions, finally managed to unite” the opposition, former Obama advisor Ben Rhodes tweeted.

Given the opposition bloc’s disunity and Prime Minister Netanyahu’s political survival skills, it is premature for anyone to rejoice at his supposed ouster.

According to initial reports, the coalition appears to be having some teething troubles. “Document shows the 3 missing signatures separating between Lapid and government,” The Times of Israel reported last night:

[Israeli TV network] Channel 12’s political commentator Amit Segal shares a photo of the document that would announce to the president that a government has been formed.

Three signatures of party leaders currently separate between Yair Lapid and success in doing so: those of Naftali Bennett of Yamina, Gideon Sa’ar of New Hope and Mansour Abbas of Ra’am.

The leaders of center-right bloc are expected to have a tough time keeping a coalition together which comprises of such divergent views and political interests.

The most worrisome factor is the inclusion of the Arab-Islamist Ra’am party and its leader Mansour Abbas in the propose government. “Abbas hails from the Islamic Movement, which was established in 1971 along the lines of the pan-Arab Muslim Brotherhood group. Its primary aim is the Islamization of Arab society,” the ABC News noted in March. Gaza-based Hamas and Al Qaeda terrorist groups are also offshoots of the jihadist Muslim Brotherhood movement.

Had to happen at some point. Even Churchill grew stale after long enough.

Churchill didn’t grow still and neither has BIbi

This will not end well for Israel

The proposed government is more right wing than Netanyahu’s current one. The right has a clear majority; the only reason Netanyahu has failed in four attempts to form a government is that a good chunk of the right refuses to work with him any more, because he’s shown that they can’t trust him. And once he’s is out of power more people will seek to join the government, allowing it to drop the left. Also, once Likud has a new leader he or she will be able toform a new government with a solid right-wing bloc.

What some people will do for power.

1. Ra’am will not be in the coalition. The plan is that it will agree to support the government from outside.
2. More importantly it was your hero Netanyahu who opened that door. He was the one who tried to set up a minority government with Ra’am’s support, and would have done it if Smotrich hadn’t refused. So if you think doing that makes the government left-wing then you must consider Netanyahu’s proposed government left-wing as well.

You have no idea what you’re taking about. The proposed government will have a security cabinet with a majority of either leftists or people who share Biden’s views on JCPOA/Palestinians. And the “right wingers” like Bennet will not be able to stand up to them or Biden. Israel is sacrificing its sovereignty.

What are you talking about? Last I heard the security cabinet will have a solid right-wing majority: Bennett, Shaked, Elkin, Sa’ar, Liberman, Matan Kahane, that’s six. Lapid is anyone’s guess, he doesn’t know what he thinks from one day to the next. The only left-wingers I’ve heard of are Michaeli, Horowitz, and Gantz (yes, I consider Gantz left-wing on security issues). Who else is on it that you think make up a left-wing majority?

And as far as Bibi’s support goes: if you take out the Arab vote, which, to be frank, should be immaterial in determining the leader of the Jewish nation, then what you see is that the majority of JEWS vote for a right wing government headed by Bibi.

First of all, non-Jewish voters are citizens. Maybe Rabbi Kahane was right and they shouldn’t be, but that’s spilled milk. They are citizens. They’re Israelis. That means, by definition, that it’s their state too, and they do get a say in its leadership. Unless you think that Jewish citizens should not be allowed to vote in non-Jewish states.

Second, even among Jewish voters, less than 30% voted for Likud. The rest of the right-wing majority wanted a right-wing government, but not necessarily led by him. (Haredi voters would be happier with Bennett or Sa’ar, who both observe the Sabbath, than with Netanyahu; their vote was not for Netanyahu but against Lapid and Lieberman.)

As far as the “sizeable chunk” of the right that doesn’t support or trust Bibi—don’t mistake the will of the people for the corrupt, egotistical machinations of careerists like Saar, Lieberman or Bennet. Bennet and Saar will lose at least half their supporters for agreeing to sit with Abbas after what just happened in Gaza.

Again, first of all they’re not sitting with Abbas, and second Netanyahu agreed to that before they did. Anyone who rejects them for it must also reject him.

That was before Abbas’s behavior during the violence in May. I had hopes that Israel could form a coalition with a responsible Arab party, but those hopes were dashed. And it’s egregious for Bennet to agree to this.

From the horse‘s mouth:

Those same promises, and perhaps more, were offered by Netanyahu as well, according to Ra’am. In a Wednesday phone call, shortly before Yair Lapid’s mandate to form a government was about to expire, Netanyahu told Abbas that he was the only one that can bring about genuine change in the treatment of the community.

“I am the only one that can open a new page with the Arab society. You can only do this with me. My status and the fact that my government will be right-wing will allow me to do things that they will not be able to afford to do,” Netanyahu told the Ra’am leader, according to Channel 12 news.

And it’s true, there are right wing people who dislike Bibi for “caving” to the Haredi parties. But the simple fact of the matter is that the right cannot form a majority without the Haredi. So I don’t know what brilliant solution they have that Bibi hasn’t implemented.

No, they don’t dislike Bibi for caving in to the Haredim. Anyone who feels that way voted for Lieberman. They dislike Bibi for selling the economy to the left in order to cling to his position. They dislike him for repeatedly breaking his promises and stabbing his allies in the back. And they dislike him for his decades-long history of speaking like Pinchas but acting like Zimri, of caving in to Clinton and 0bama, of giving away Hevron as soon as he gained office the first time, of the building freeze and the Shalit exchange and of deliberately enabling the Gaza withdrawal while pretending to oppose it.

One cannot form a government with enemies of the state.

The people of Israel will suffer with Netanyahu’s departure.

Aided and abetted by the Biden administration. A good comment today from one of the columnists at the “Times of Israel”; in essence, nowhere in the history of democracies has a prime minister been installed (installed himself?) with support of only 5% of its people.

Our government and a good portion of the people have forgotten what it is and hated Trump for reminding it and putting it in its place (trying to). Israel’s citizens seem to have forgotten that they are surrounded by hordes – the only word that seems to fit – who have repeated endlessly for more than a half century that they want to to annihilate the country. And yet here we are. Is re-learning a thing?

I guess in Israel, elections don’t mean much.

On the contrary, they mean everything, which is precisely why we’re in this situation. Everything that is happening is the direct result of the elections; all four of them.

Since Israel has new constitution, I assume the references to one of the Basic Laws. Do you know which one?

Presumably Lapid‘s promise to serve all citizens means that he is walking back his threats against Chabad (as reported some months ago on Arutz 7) and his boast (as recounted by a Charedi leader, also in Arutz 7) that his party would be taking religious Jews to the garbage dump in wheelbarrows.

I believe the wheelbarrow comment was Lieberman, not Lapid.

Lapid’s threat was specifically if they voted for Smotrich and Ben-Gevir. But (a) he won’t be in a position to stick it to them; and (b) it means exactly as much as his other promises and threats, i.e. nothing. Also I seem to recall he apologized, for whatever that’s worth. Remember, Lapid is not a left-winger, he’s a narcissist without any principles at all. He’ll do whatever he finds advantageous at any given moment; rather like Netanyahu, in fact.

The bottom line is that this proposed government is a very temporary solution. All complaints that it will be unstable miss the point. It doesn’t have to last very long. Once Netanyahu is out of power the whole equation changes. The right will be able to reunite, and this platypus of a government can be thrown out and replaced.

The economy certainly has been better. He did good when he was finance minister. But in the last few years he’s given it to Kahlon and then offered it to Nissenkorn to destroy, if only they would keep him in office.

Not to mention that how outrageous it is to do what you admit they’re doing: forming a fake coalition all for one ignoble purpose. If the people of Israel want Bibi gone, they can do that through the ballot box.

They did it through the ballot box. A clear majority voted for parties that said they wanted him out. Only 25% voted for the Likud under his leadership, and a good many of those would rather have someone else lead it.

What I would love to see is a government emerge which would finally whip the belligerents so bad that they no longer have a taste for terrorism. Jews deserve to live in peace, they should should not have to put up endless terrorism.

Unfortunately the IDF lawyers and the so-called “attorney general” would not allow it. So long as they are the real government it doesn’t matter who gets elected.

But for what it’s worth the proposed new government would be slightly more inclined to such a solution than the current Netanyahu government is.