Harris in El Paso, But Won’t Visit the Actual Border or Tent City in Nearby Fort Bliss

Harris in El Paso, But Won’t Visit the Actual Border or Tent City in Nearby Fort Bliss

“If Vice President Harris truly wanted to assess the situation at the border, she’d head to McAllen and sites along the Rio Grande Valley.” 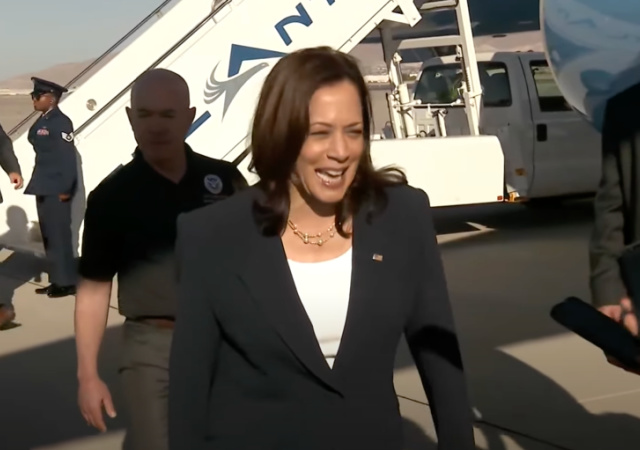 You guys. Vice President Kamala Harris is at the border* today!

*Border: Harris is at the U.S. Customs and Border Protection-El Paso, a facility miles away from the border.

Update: Harris went to the port of entry… for a few minutes and a photo op pic.twitter.com/EeDvYqrnxo

Another point: El Paso, TX, is far away from the epicenter of the actual border crisis.

A senior border official told Fox News: “If Vice President Harris truly wanted to assess the situation at the border, she’d head to McAllen and sites along the Rio Grande Valley. It will be worth seeing if this trip extends beyond a rubber stamp of ‘I visited the border.’”

“Instead of going there and talking to the men and women dealing with that crisis and taking care of thousands of unaccompanied children, she picks El Paso because she doesn’t want to see the devastation that her administration’s policies have caused,” he said.

“Now, El Paso, is seeing a rise in crossings, absolutely a rise in drug crossings, but when you look at the crisis, why would you not go to the epicenter and talk to the men and women of Border Patrol and see what’s going on?” Homan noted separately in a Friday interview on Fox News’ “America’s Newsroom.”

Without knowing details of trip, a big question is whether she mostly spends time with Escobar and others who endorse the admin's border policies/management, or whether she meets other figures who are upset, concerned, skeptical etc

El Paso has been less impacted than RGV, AZ

As Homan said, problems have started to stir in El Paso. Just the other day news came out of Fort Bliss about a tent city at Fort Bliss.

Fort Bliss, which is near the El Paso detention city, had to put many migrant kids under 24-hour supervision due to self-harm attempts:

Some children held at the large tent complex at the Fort Bliss U.S. Army base have required one-on-one supervision 24 hours a day to ensure they don’t hurt themselves. Others have refused to eat or spend most of their days sleeping on cots. Workers said they saw migrant girls and boys with cut marks on their wrists and arms.

Federal officials became so concerned about migrant teens harming themselves that they banned pencils, pens, scissors, nail clippers and regular toothbrushes inside tents housing hundreds of children, according to an internal document. Workers at the site said they were even instructed to remove the metal nose clips from N95 face masks.

In a federal court declaration filed Monday, a 13-year-old Honduran girl who had been housed at Fort Bliss for 58 days as of June 6 said some teens used their identification cards to cut themselves. She said she was placed on the “suicide watch list” along with 28 other youths.

Fort Bliss has 1,600 migrant teenagers. It can house 10,000 children. The administration tries to pass it off as a shelter, but workers said the children view it as a jail:

“They’ve gone from a small cage at Border Patrol to a larger cage at Fort Bliss,” one federal government employee who worked at the site told CBS News. “It’s a juvenile detention facility.”

During one incident in May, a group of teenage boys protested inside a tent, issuing a list of demands to improve their living conditions, three workers said.

On May 4, five children unsuccessfully tried to run away from Fort Bliss by jumping a fence near the recreation area. After being transferred to another facility with stricter security protocols, one of the boys said he tried to escape from Fort Bliss because it was too crowded, hot and the food was not good, according to a report reviewed by CBS News.

I had to include this video of reporters confronting Harris.

The reporters got after Harris when she stepped off the plane at the El Paso airport.

Harris insisted this is not her first trip to the border. We all know she is referring to her visits as a senator.

That does not count, ma’am.

A phony visit by a phony (and incompetent) political hack

We sure dodged a bullet when they found an exprimental alzheimer’s drug to stave off Biden’s symptoms for another couple of years so he could appear to be functional for a few minutes each day.

Meanwhile, Biden is in the basement frantically pouring over 3×5 cards that have been given to him to study so he can come out three hours later and read them to us in a low demonic voice telling us the status of the border. Being thrilled with tingles going down both legs, the media and mark311 will tell us what a wonderful, smart, intelligent, hard working and talented president we have. And that Kamala is the greatest VP since sliced bread.

According the the AMA, excessive whispering is a symptom of age related dementia.

Maybe she meant she’s making a “run for the border” (i.e., Taco Bell)

If she is not photographed at the border, she is not really responsible for it?

What, you don’t ACTUALLY expect her to break a sweat – do you?

She is part of the ESTABLISHMENT WING of the DNC. They see themselves are RULERS and believe the people are meant to be led. Breaking a sweat is not part of the deal for these entitled politicos. It is the people who they rule who are to must sweat.

She could have stepped-up. But she is the incompetent whore we feares she was. And that’s the good news.

She might as well have gone to woke Disneyland.

Let me guess, There will be a photo op at the “On The Border” restaurant.

Since a bunch of them went bankrupt and closed, I approve that photo op.

In a federal court declaration filed Monday, a 13-year-old Honduran girl who had been housed at Fort Bliss for 58 days as of June 6 said . . .

Please tell me if I’m wrong but I was under the impression that the federal government couldn’t keep children in detention for more than 30 days before having to transfer them over to the Bureau of Immigration Placement (or whatever it’s called). So if I’m correct how could this 13 years-old be held for 58 days. Wouldn’t that be a blatant violation of federal law/regulation by the Biden regime?

Here we go. Any minors have to be transferred to the Office of Refugee Resettlement within 72 hours of being detained. It’s federal policy. So holding a 13 years-old for 58+ days in detention on the border is illegal.

Doesn’t sound like things are improving since the articles were written. Perhaps someone could ask Harris about this violation of federal policy.

She appeared to be meeting with local El Paso leaders of the many charities that work to feed and house folks cut loose by CPB. Annunciation House is one I am familiar with from my time in El Paso.

Take a look at their website and social media to get a feel for how much crossings increase or decline. The administration may not provide easy data but the charities along the border provide a very good insight.

When they have need they ask for volunteers and funds when the need drops they discourage volunteers and focus on funding. When it really drops off they start taking donated items like toothpaste/toothbrush v only taking funds.

Answers exist if you want to look for them.

And on a Friday to boot.

In other words, let’s get this done and over with as little notice as possible.

Of course she didn’t visit the border. She hardly left the airport.