People didn’t like renaming Columbus day so the school board went all out. Happy Off Day, everyone! 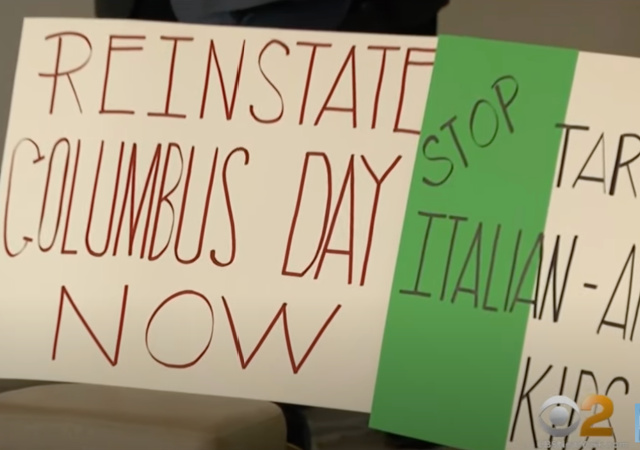 The school board in Randolph Township in Morris County, New Jersey, voted 8-0 to remove all holiday names from the school calendar.

It sounds like the school board got all huffy because people had the nerve to get upset when they renamed Columbus Day to Indigenous Peoples Day.

Board member Dorene Roche said, “If we don’t have anything on the calendar, we don’t have to have anyone [with] hurt feelings or anything like that.”

No Thanksgiving. No Rosh Hashanah. No Yom Kippur. I guess it also means no Martin Luther King Jr. Day, either. His birthday is just another “off day.”

“I don’t think really it is the board’s responsibility to be naming these holidays,” stated board member Ronald Conti. “Either take them off or just adopt whatever the federal and state governments are doing.”

The meeting had a “public comment period and discussion” but then quickly went to a vote. It confused those in attendance.

“What did you just do? What just happened?” shouted one man.

New Jersey has a large Italian American population. A lot of them had an issue with renaming Columbus Day because they felt like the board was trying to erase them. Remember, Italians, like my great-grandparents, faced a lot of discrimination when they arrived in the early 1900s.

The community is not thrilled the school board used their concerns to erase everyone:

Members of the Italian-American community gathered in Randolph on Sunday, speaking out over the BOE’s recent decision to remove the names of all holidays from the school calendar.

Instead, they’ll now simply be referred to as “days off.”

“It’s really a disgrace. The fact that they removed all holidays is really an insult to everyone,” Dimino said.

The “elites” in this country hate you. End the public school monopoly now. School choice is the only viable way forward.

Wonderful!
Now, do the right thing and abolish the race designation. Show us how “equal” we are.

These marxist cockroaches come out and run for local school boards. Then once a marxist gets a tiny bit of power they become dictators. Citizens should attend local school board meetings with cans of bug spray.

LIBERAL MEDIA GOING ALL OUT TO DISCREDIT OPPOSITION

Today NBC News published a piece about opposition to CRT that is down-right Orwellian in it’s flagrant lies and misdirection. It is worth reading just to see how diabolical the media is. The authors of this piece should go down in history as liars who care nothing for the truth. They are purely propagandists. See the link below.

A few highlights:
1. In the story, they define CRT as “the academic study of racism’s pervasive impact”

2. The say the point is that “national groups that aim to disrupt lessons on race and gender” – gender ? as if CRT is a LGBT issue – which it is not.

3. And another paragraph trying to turn this into a cause for LGBT activists = “Virtually all school districts insist they are not teaching critical race theory, but many activists and parents have begun using it as a catch-all term to refer to what schools often call equity programs, teaching about racism or LGBTQ-inclusive policies.” And notice how they twist the narrative — Oh, and the poor school districts who are victims of the nasty parents who care too much about their kids.

4. Let’s blame conservatives – it can not be that parents actually care about their kids — “Now, conservative activists are setting their sights on ousting as many school board members as they can, and local Republican Parties have vowed to help”

5. Of course – TRUMP – “Christopher Rufo, a senior fellow at the Manhattan Institute, a conservative … who said he was in touch with then-President Donald Trump’s staff before he issued an executive order last September banning critical race theory’s use by federal agencies”

AHEAD OF THE CURVE

AT ABOUT 8:30pm TODAY PROF JACOBSON WROTE ABOUT THIS NBC NEWS ARTICLE – WHICH I POSTED ABOUT 8 HOURS EARLIER – AT ABOUT 12:15pm.

So if I am understanding the logic here the Board voted to remove the particular names associated with the various Federal and State holidays and observances in order to defuse political and social tensions.

I didn’t see any reference to the various monthly celebrations or observations such as ‘Pride Month’. Clearly these monthly celebrations have at least as much potential for creating tension as religious, patriotic or cultural themed Federal and State observed holidays.

The Board has painted themselves into a much more difficult corner. Now they must remove and refuse the various monthly themed observances or completely undercut the basis for refusing to retain the names of and observances for the Federal and State holidays they found divisive.

“The Board has painted themselves into a much more difficult corner.”

Why? Neither logic, fairness, nor common sense prevails here. They could rename what was once known as Christmas Break as LGBT Celebration Break. There is nothing to stop them, and they can use any artifice of language to justify it. All that matters is if the constituents of any given local allow it, or not.

I suppose they could. Though that would indicate the Board had:
1. Abandoned any pretense this was not simply an exercise in raw power
2. Demonstrated they didn’t intend to even acknowledge the will of their constituents
3. Shown a disdain for cultural norms and a rejection of the strictures of decency and basic order

Some might argue that taken together that means the constituents would be freed morally and ethically from any similar constraints on their future actions.

The descent into a lawlessness and the rejection of norms in favor of raw power is by no means a one way street. Once society veers into that territory it may be some distance before an offramp to safer ground can be located. Best we don’t go down that route.

“The descent into a lawlessness and the rejection of norms in favor of raw power is by no means a one way street.”

It often is a one way street. Millions have peacefully marched into concentration camps in Germany, China, Russia, Cambodia, North Korea, and on and on and on. Even here in the US at the start of WWII. Raw power works for those bold enough to wield it. Most people simply want to avoid a fight.

Example – Just wear a mask. It’s easier than than the consequences of disobedience. That concept runs well up the chain of human action. People will watch passively as authorities haul away their wives and children to a certain, grisly, and unjust death to avoid the personal consequences of even lifting a finger or expressing a mild verbal objection. Again, it’s happened millions and millions of times throughout history and across the globe.

We all like to think of ourselves as heroes, and sometimes some of us can rise to the occasion. But, do not underestimate the cowardice of people. Even Peter denied Christ three times. We are all weak, almost without exception, and are incline to allow the powerful to rule over us.

Yes, they can take over and exercise raw power. And most people will let them.

From the current level of awareness bubbling up around CRT and grassroots efforts in local school districts, State Legislature and some Federal elected officials in very loud and substantive opposition it appears that a large number of people are refusing to ‘board the train’.

It is true that a number of people would volunteer for a train ride to reeducation camp; look at the folks kneeling to BLM. However I would simply suggest that the brainwashed, d/progressive who would do so are vastly outnumbered.

If the majority of folks really believed in the validity of this then they would have shown up to kneel at the BLM rallies. Sure some did but certainly not millions driving into the site of scheduled protests to bend the knee.

Since 75 million people voted for the anti-kneeling candidate, DJT, in 2020 and some of the Biden voters appear to be experiencing buyers remorse I don’t think the BLM, CRT tribalism has a long lifespan.

This is the high water mark, IMO. That’s why the d/progressive are frantic to ram through their agenda by hook or by crook before they lose the HoR in 2022. They recognize that they have pushed too far too fast and the backlash will only intensify.

“CONCERN ABOUT CRT IS JUST A RIGHT WING CONSIRACY”

Does he not know that there is an internet that people can search and easily find what it is all about ? Gaslighting only works on ideologues who are too brainwashed or dumb to find the truth. Are there enough brainwashed and dumb voters in VA too elect this guy ?

“I guess it also means no Martin Luther King Jr. Day, either. His birthday is just another “off day.”

For whom? Government weenies? “Non-critical workers” who get paid vacations for not showing up? I’ve certainly never had MLK Day off.

For the school, obviously. And every school does have that day off.

Yes it’s a day off but what do they call it?