Eric Adams Was Right – NYC Board of Elections Admits To 135,000 Vote Overcount

Eric Adams Was Right – NYC Board of Elections Admits To 135,000 Vote Overcount

Adams originally met with fury that he was just like Trump for complaining about strange vote count. 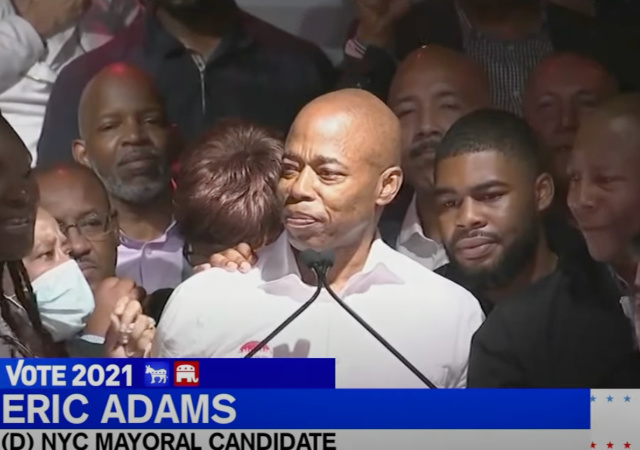 New York City is using the Ranked-Choice Voting (RCV) for the first time. The RCV allows voters to rank five candidates by preference. If no candidate receives 50% of the votes in the first round then “the winner must be decided by examining voters’ secondary choices.” Absentee ballots are also counted so the candidates might not know until mid-July the winner of the primary.

Results rolled in last Tuesday night, June 22, after 82% of the votes came in. Adams ended on top with 31.6% of voters choosing him as their top candidate.

Another round of votes counted on June 29, a week later, cut his lead to only 2%. Somehow Kathryn Garcia, the third-place candidate, made a huge jump to second-place.

Wow. Tight results in the NYC mayoral election (RCV just came out): Kathryn Garcia barely beats Maya Wiley in the penultimate round, then closes most but not all of the gap with Eric Adams in the final round.

“The vote total just released by the Board of Elections is 100,000-plus more than the total announced on election night, raising serious questions,” stated Adams’ campaign. “We have asked the Board of Election to explain such a massive increase and other irregularities before we comment on the Ranked Choice Voting projection. We remain confident that Eric Adams will be the next mayor of New York because he put together a historic five-borough working class coalition of New Yorkers to make our city a safer, fairer, more affordable place.”

It turns out Adams was right.

Maybe people should, you know, not jump to conclusions. 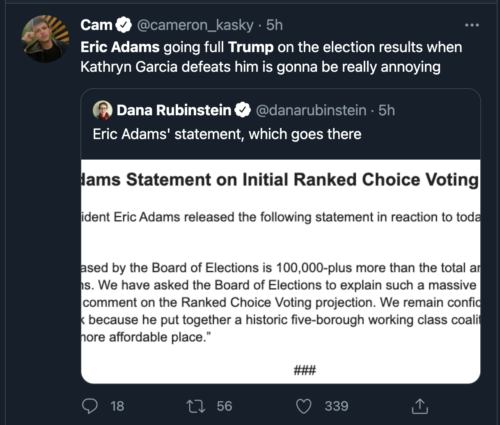 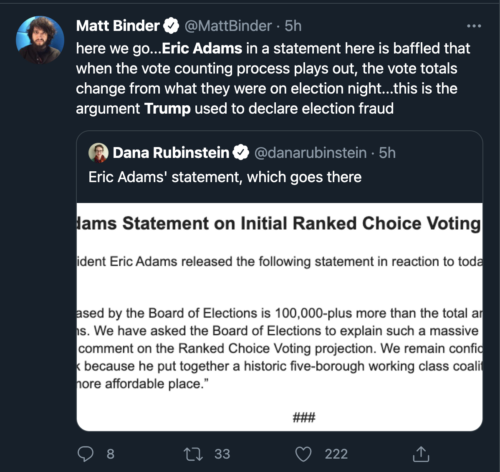 Matt at least owns up to his mistake and attached the response to his original tweet:

the Eric Adams campaign is right, the numbers apparently don’t add up…but we all assumed he was attacking the results like he started doing even before Election Day https://t.co/v9gLWitJeb 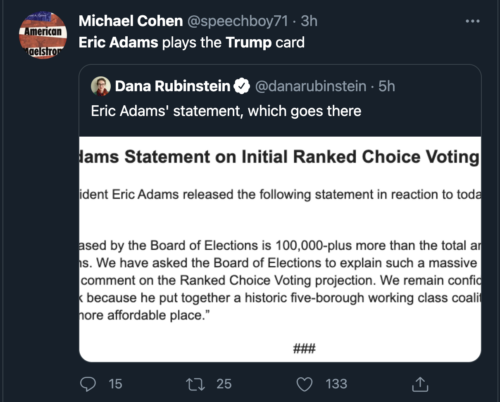 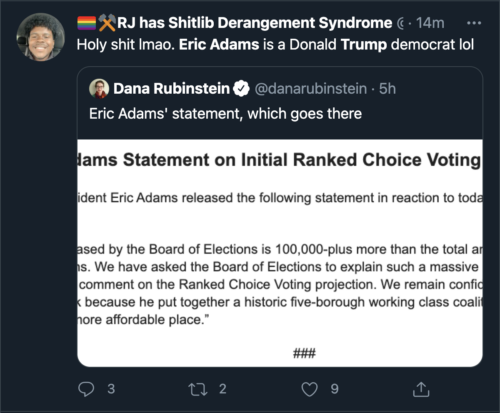 Pundits at 5:30pm: It's some despicable "Donald Trump shit" for Eric Adams to question the veracity of these election results

NYC Board of Elections at 10:30pm: Turns out we actually did add 135,000 fake votes pic.twitter.com/YsaYQqsfsK

Seems pretty insulting to imply that Eric Adams is somehow following and copying Trump instead of making his own choices.

Why are so many liberals rooting for Garcia over Adams? https://t.co/WsksLgYgY2

I take it back, Hayes is also *exactly* this shameless. The nerve of this guy. pic.twitter.com/TwYdCq6kDi

"Just like in the 2020 Presidential Election, it was announced overnight in New York City that vast irregularities and mistakes were made and that Eric Adams, despite an almost insurmountable lead, may not win the race…" pic.twitter.com/8xWsn1ttXQ

Funny that the desired NYT candidate had the test ballots rigged in her favor.

There’s no indication that the test ballots were in her favor. That she almost caught up to Adams on preferences may still be accurate, but we won’t know until the new numbers are released, without the 135K bogus votes.

But why should we trust the people doing the counting after this? Why should it take so long to count the votes? to agree on how many votes there are? I hear it may be the middle of July before all of the results are known.

Rankled Choice Voting is looking like a scheme to defraud.

It’s got nothing to do with the ranked choice system. It takes so long to count the votes because absentee votes have time to come in. The “stuffed ballot box” could just as easily happen in any system.

The delay in announcing how the preferences go, that is obviously related to ranked choice, since that’s the only system that has preferences, but it’s completely unnecessary. It would make sense if votes were counted by hand (as they should be), but since they’re scanned by machine there’s no reason at all why the machines couldn’t have been programmed to produce at any time a snapshot of the fully allocated two-candidate preferred vote as at that moment. It would be a cinch to do, but the BOE is too incompetent to have done it.

I’m less and less confident in our election process.

They can’t even hide the cheating.

Correction: They don’t even bother to hide the cheating.

Well actually they’re hiding the cheating by claiming it was “testing.” But only after they got caught.

That isn’t trying to hide the cheating, that is simply an attempt to obfuscate by passing the buck.

Some people did some things.

A school board election is a bad time to discover the Board of Elections can’t do Math!

Math is racist, or something.

Board of Elections unfortunately has the same acronym as Board of Education.
Pity those of us who have to deal regularly with the Bureau of Land Management.

Trump won, Epstein was murdered, obama is a fraud, the GOP is the problem.

Curtis Slewa would do for NY what Rudy Guliani did for it.

About as subtle as a brick through a stained glass window.

So did Adams get ANY of these “test votes”? Or is this like the “dead voters only vote for Democrats” problem?

Presumably he got a reasonable share of the test votes. Otherwise it wouldn’t have been a good test.

Or all the test ballots could have been identical to make it easy to validate the test results. It would be nice to get some information about these test ballots and how they affected the count.

The incident does show one thing, however – if “unintentional” ballot stuffing (and I d not quite buy this was unintentional yet) is possible, intentional fraud is is much more possible.

Denial or that would simply be, well, denial.

May the nuttiest Dimocrat win. NYC deserves it. To heck with law and order.

We can’t rely upon the competence, commitment to transparency and a spirit of non partisanship among our elections officials.

They consistently make basic errors. They fight attempts to review their processes even when those processes are required to be open for inspection. When every high profile instance cuts to the advantage of one ideological viewpoint and against the others that isn’t nonpartisan.

The States need to create and mandate comprehensive audit procedures in a percentage of polling places Statewide. Find anomalies, delay certification until a 100% audit is completed.

Mistakes happen. When the mistakes cut in one direction those are not honest mistakes they are intentional, IMO.

“Mr Bond, they have a saying in Chicago: ‘Once is happenstance. Twice is coincidence. The third time it’s enemy action’.”
Auric Goldfinger

Why is the story here that a Democratic candidate questioned the vote counts instead of that the vote counts were breathtakingly false? At this stage there is only the BOE version claiming an oversight resulted in a 135,000 vote overcount that did change the election results. It could just as easily have been a purposeful attempt to throw the election to someone’s preferred candidate.

Because the outcome of the story points to the fact that sometimes it’s not a “conspiracy theory” or power grab to suggest that there’s something wrong with the results of an election. And because it underlines the fact that news media can’t be trusted to report the facts, and attacks the messenger instead of attempting to verify or falsify the message. These are the lessons of the story, and are just as important, if not more so, than the story itself.

It doesn’t increase confidence in the voting process when (1) Total #of votes cast doesn’t match over a period of a few days with no plausible reason for it to have done so. (2) The overwhelming knee jerk response to pointing out this factoid is to attack the persons pointing out the naked nature of the emperor. And (3) apparently the persons responsible for verifying the voting process works and is accurate not only can’t do math, but the “random” test votes they generated pretty much all went to just one candidate.

Your #3 is not true and not supported by any evidence.

There is world of difference between “isn’t true” and “no evidence”. There is no evidence because they didn’t release their “test sample” so we could see if it could actually generate the result we see using the algorithm that is supposed to be in use. Great transparency there. More to the point, if this were an honest test sample they wouldn’t be using the names of real candidates. Real tests don’t use the names of real people. That they did basically proves ill intent.

There’s not even any indication of it. There is literally nothing to make anyone suppose it. BobM made an assertion simply out of thin air.

They haven’t released the test suite because nobody’s asked them to. There’s no reason for anyone to ask for it.

And no, real tests of the ballot have to use the real ballot, or they’re no good, and they fail to find errors that will show up on election day.

Old and Cold: Eric Adams informs us questioning the results of an election is blasphemy!

Seems that from now on elections will be a contest to see who can cheat the most.

Whether it’s blasphemy depends on who is doing the blaspheming.

VOTE FRAUD IS TOO DAMN HIGH

yep, the cheating is addictive!

The new reality for formerly free and fair elections is that a 5% to 10% lead is no longer good enough even in local and state elections. I point to John James, Jr., an African American Republican, going into the overnight with a 5% lead over a terrible Dem incumbent, Gary Peters. Not good enough for a Republican. Just like the cancel culture is eating it’s own, now the Dems are eating their own too.

Unfortunately, it still won’t be enough for the Dems to accept common sense measures to guarantee fair elections.

Ask Bernie Sanders if the Dems are only just now eating their own.

Someone got a good talking to!

“No, no, NO! We only do this when it’s a Republican we’re trying to beat!”

Over 100,000 fake votes in just one city. Less than 50,000 in three states would have thrown the Presidential election into the House.

No, they would not have. The only way a presidential election can go to the house is if a third candidate gets enough electors to deny each of the big two a majority.

Or a tie at 269 which is unlikely but possible.

Matt Binder did not own up. He tried to blame Adams for priming the pump. It shouldn’t have mattered what Adams did or didn’t do, a real journalist would have looked into the claim and judged based on facts, not on preconceptions he may have developed due to the behavior of another party.

Wait a darn minute, now they admit voting can go wrong?
Are they saying it’s the first time this ever happened? Or they are overriding Dominion’s choice? Or is this a quick payoff so he doesn’t open that voting fraud can of worms?

“It’s some despicable “Donald Trump shit” for Eric Adams to question the veracity of these election results.”

I’m so old, I remember Al Gore doing some despicable “Donald Trump shit” when he denied his loss to George Bush.

I also remember Hillary Clinton doing some despicable “Donald Trump shit” when she denied her loss to Donald Trump.

I guess he wasn’t the communist they wanted to win office.

Well, they still have their Absentee Ballots…if they are done with them yet.