She will rake in a lot of the dough because no one will challenge her on her many lies in the past year. 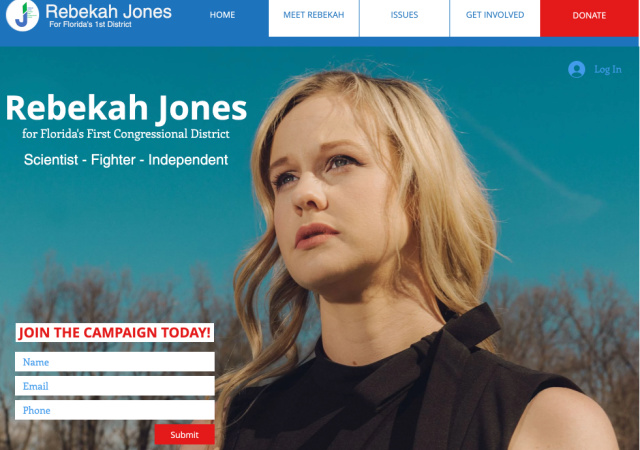 Jones said she will file the FEC paperwork on Friday.

“An American scientist fighting for honest government,” Jones declared on her website.

Wait, it gets better:

I made transparency and accountability the cornerstone of my efforts while managing the Florida Department of Health’s public COVID-19 data and surveillance. My refusal to play political games with people’s health and safety got me fired.

​Now, I’m taking the fight for facts, science and civic duty to Congress.

Jones does not mention Charles Cooke’s takedown of her lies concerning Gov. Ron DeSantis and his administration forcing her to manipulate COVID-19 information.

Remember the raid on her house? It happened because she hacked Florida’s Emergency Alert System and sent out an activist text.

Jones cannot take responsibility for her actions. She is in constant victim mode. Her issues page proves she has not changed.

The United States makes it too hard to hold the media accountable when they publish fake news and outright lies. Media should serve as the Fourth State – keeping government accountable, not working as an extension of government offices. I want to make it easier to hold media who publish defamatory, libelous, slanderous and grossly negligent articles about private citizens and limited public figures accountable. This issue has personally impacted my life in the last year, and I know how helpless an ordinary person can feel when the mainstream media defames and slanders the people.

That’s hilarious because the media and the left propped up Jones from her first lie.

Not one peep about Jones’s scandals.

no more bigger bag of excrement than Joe, so if they count the votes the same way, she’ll win

Invest in popcorn futures. This should be a heck of a show.

She is not a “whistleblower”, she is a complete fraud.

Remember which side the lame stream propagandist media is on.

She’s also not an actual scientist.

She’s a glorified data input monkey, and an incompetent one at that.

Wait, are you two suggesting that entering data into an Excel spreadsheet doesn’t make one a “Data Scientist?”

The kind of candidate that may actually make Gaetz more attractive.

Media should serve as the Fourth State –

Assuming that it’s merely a typo, I issue my usual challenge to those who use that stupid term: I dare her to name the first three estates without looking them up. I double dare her to find either “estates” or “media” in the constitution.

I want to make it easier to hold media who publish defamatory, libelous, slanderous and grossly negligent articles about private citizens and limited public figures accountable.

Oh, so she agrees with Donald Trump, and opposes the US Supreme Court and the ACLU. Nice to know.

Hey, if you’re going to run against anyone, make it someone this easily discredited.

How completely Democrat to run someone with multiple arrests, including felonies, in their history. From her Wikipedia page:

Jones has had prior criminal charges in Florida. At the time of the police raid, Jones was facing an active misdemeanor charge for allegedly cyberstalking a former student and romantic partner and for publishing sexual details about their relationship online. She was fired from her Florida State University teaching position for threatening to fail her estranged romantic partner’s roommate.[45]

She had also faced prior charges, including felony robbery, trespass, and contempt of court, stemming from an alleged violation of a domestic violence restraining order related to the same ex-boyfriend, but those charges were dropped. Prior to that incident in 2017 Jones had been arrested and charged with criminal mischief for vandalizing her former romantic partner’s SUV, but those charges were later dropped, as well.[45][46][47][4]

Jones also faced criminal charges in Louisiana in 2016, where she was arrested and charged by the LSU Police Department with one count each of battery on a police officer and remaining after forbidden and two counts of resisting arrest after refusing to vacate a Louisiana State University office upon being dismissed from her staff position.

And like the litany of other Dim criminals from the past, she’ll be immune from prosecution now that she is a “politician.”

At the time she was hired, the state government knew from its background check that Jones had completed a pre-trial intervention program in Louisiana in 2018, thereby securing a “no conviction” record for “battery of a police officer,” and it knew that she had entered into a deferred-prosecution agreement with the state of Florida in 2017 after being charged with “criminal mischief.” And yet it hired her anyway. Had she applied for a more important role, the forest of red flags that Jones leaves wherever she goes might well have prevented this mistake — especially given that she did not mention any of them in her application.[bolding added]

And yet, she didn’t mention any of her criminal past when she applied to be the “Covid-19 Dashboard Manager”. Something that would have perhaps changed the FLDoH’s decision to hire her and prevented the fustercluck that resulted from her actions.

So when did she move back to Florida from Maryland?

“No Person shall be a Representative who shall not have attained to the age of twenty five Years, and been seven Years a Citizen of the United States, and who shall not, when elected, be an Inhabitant of that State in which he shall be chosen.”
— U.S. Constitution, Article I, section 2, clause 2

Note “when elected”. That means that if she wins the Dem primary next year, she will have to move her official residence back to Florida before Nov 8. (After the election she could move it away again, but she’d have to move back before the 2024 election if she wanted to run again. Also note that it doesn’t matter where in Florida she lives on that date.)

A few more points to include for revision in the Article V Convention!

Her parents probably threw her out.

We all need to start using Alinsky rule #4 to make the left live up to the rule book they wrote. Go after every one of the BUYDen clan and every member of Congress on the left on a daily basis.

I couldn’t help but read this article’s list of Jones’ many faults, and think, “So, what sets her apart from other Democrats? She’s just a run-of-the-mill Dem candidate.”

Will Abortion Barbie from Texas be her campaign manager on this train wreck of a campaign?

This is why 3rd parties exist.