Stevens thinks local school boards choose the curriculum. I cannot wait to see her lead the charge to end the Department of Education. 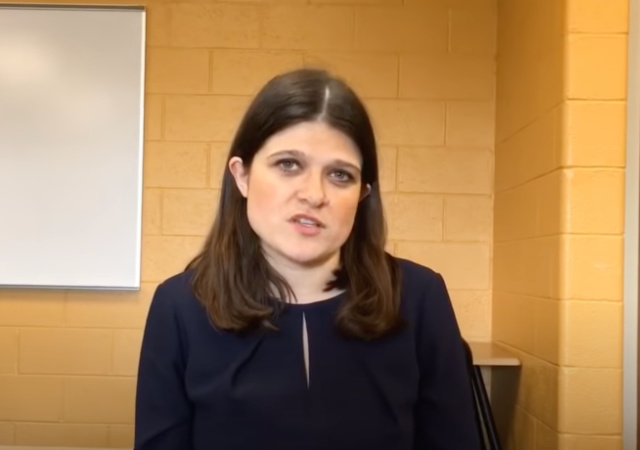 Haley Stevens gets called 'a coward' at town hall after declining to take a stance on critical race theory https://t.co/ZPHOcfxAZZ pic.twitter.com/0a3aN8YGnz

Footage obtained by Fox News showed Stevens being asked about CRT during a June 10 town hall in Northville, Michigan. She responded: “As a member of the Education and Labor Committee, what I want to do is continue to support our schools to be able to educate the next generation.”

“What a coward!” shouted a male voice. “You’re a coward.” Stevens seemed to smile in response.

The footage obtained by Fox News shows a woman asking Stevens: “What is your position on non-empirical critical race theory in the school curriculum?” The follow-up from a male questioner seemed to just ask about CRT, although the audio is somewhat unclear.

Larkin Parker, Stevens’s communication director, said she took a stance when she said “school curriculums are not a congressional issue.” Parkin thinks the “local school boards” make the choices.

Maybe someone should introduce Stevens and Parker to the Department of Education. I hope Stevens remembers that whenever anyone threatens to withhold federal money from a state and its schools unless they comply with what the federal government wants in said schools.

The thing is education should be as local as possible. I’m glad Stevens agrees. I hope she leads the charge to end the Department of Education.

I guess this also means Stevens should not serve on the House Committee on Education & Labor. That committee “oversees federal programs and initiatives dealing with education on all levels.”

Oh, wait. President Joe Biden’s Department of Education “has also proposed grant funding that’s been viewed as a way to promote CRT and its related ideas.”

Curricula typically are decided by local boards. States usually set standards and then schools should have a choice in how to meet those standards.

Of course, states will mandate schools use a “tier 1” curriculum to meet a set of standards and get to decide what is tier 1.

The problem with being a modern liberal is what your constituents and your party want are worlds apart.

Reminds of the mugwump bird who sits on the fence with his mug on one side and his wump on the other.

Silence is generally accepted as affirmation. So, she actually did answer the question.

Maybe something simpler than cowardice. I’m looking at this Representative, and she doesn’t exactly strike me as Marie Curie, if ya know whaddi mean.

She is missing that certain glow…

I remember glow in the dart watches, I did not understand that the time how dangerious they were, I was still a kid, the same was true for most people. I also rementer xray machines which allowed you to see your feet in the shoe. It is amazing how lax control was related to radiation.

Stevens is in a predominantly Conservative Republican district with highest performing schools. She just wrote her resignation letter. In her two races she receive a total of about $35,000,000.00 in out of state money to buy the seat. She barely won in 2020 and won’t survive on a platform of ignorance.

Well her votes for or against CRT matter a good deal more than water BS she slings at townhall. She could abstain but not every d can, they have a slim majority so maybe six to eight d can duck the vote. More than that and it won’t pass.

That doesn’t even include the show votes the r will attempt. This is a case of ‘run but not hide’.

If your going to be a Leftist you need to keep out Lefting the others or you will be tossed out of the club.

If you’re not against Marxism – you’re for Marxism.
and
CRT is Marxism (the fox) in sheep’s clothing
(indoctrinating kids to think of oppressor/ victim based on skin color)

The DoE provides an almost negligible amount of money to local school budgets; maybe 10 percent tops. The better point here is that the federal DoE shouldn’t exist at all…

10% is hardly negligible.
Is this claim for direct aid, or include funds given to the state and funneled to local schools?

“I hope Stevens remembers that whenever anyone threatens to withhold federal money from a state and its schools unless they comply with what the federal government wants in said schools.”

Good idea, but wouldn’t it even be better if such states and schools told the federal government where it can shove its money?

School unions exist to make sure that never happens.

Here’s the racket. The Feredales collect money and send it to bureaucrats in Washington DC. They make up rules forcing state and local schools to jump through hoops and crawl through mud to get their money back. Come on man, the DOE can not claim to have made schools or education better, just more uniform.

Bye-the-way…the NCAA, yes the National Collegiate Athletic Association has a pretty big curriculum office. To get an athletic scholarship an athlete must have graduated from high school with the right number and type of credits. Too many “non-academic” credits, too low of GPA are disqualifying. For example, art, music, and business courses are not considered academic.

School unions exist to milk the taxpayers for the benefit of the unions and, somewhat, the teachers.

10% is hardly negligible.
Is this claim for direct aid, or include funds given to the state and funneled to local schools?