RI ACLU Director Steven Brown: “we have expressed our opposition to the only version of an amendment I have seen, and we would not support a bill that simply gave the Attorney General blanket authority to make such a determination” 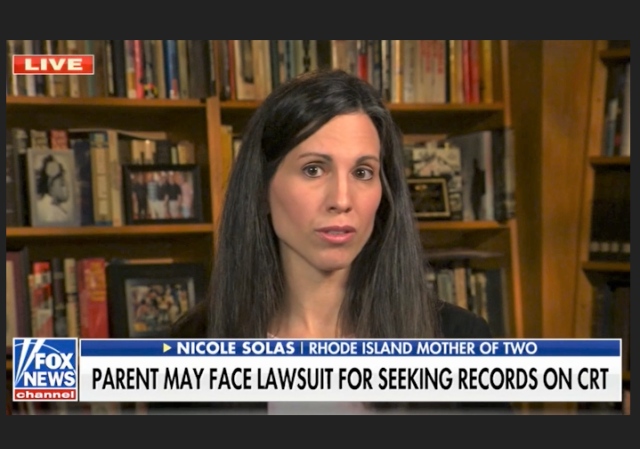 I recently posted about a behind-the-scenes effort by the Rhode Island School Superintendents Association (RISSA), together with unions and friendly legislators, to curtail public rights under the RI Access to Public Records Act (APRA), in reaction to voluminous public records requests filed by South Kingstown mom Nicole Solas seeking information about Critical Race and Gender teaching in school.

The effort, revealed in documents obtained by the Legal Insurrection Foundation pursuant to APRA (ironically!), was punctuated with crude demonization of “right wing” groups and parents. See that post for details and screenshots, RI School Superintendents Group: “We all know many of our citizens live in a separate news reality with Fox, Newsmax and their ilk”:

… this no longer is only about Solas. It’s about how politics, and dislike of “right wing” parents and groups, has entered into the conversation among school superintendents, legislators, and others. Conservatives frequently claim the educational bureaucracy is hostile to them, and these documents seem to reflect that….

Parents opposing the obsessive racialization of their children’s education don’t have law firms on retainer, 8-figure budgets, lobbyists, “union friends,” leglistators on speed dial, public relations firms, or friendly local media. What they have is a collective feeling that education has gone very wrong, that the best interests of the children and the nation are not being served, and that much takes place in secret.

RISSA circulated draft legislative language that would give public agencies, including school districts, the right to declare requests excessive and require the Attorney General’s Office to resolve the dispute. This would create substantial delay, and would divest the public of the presumptive right to public records. Here’s the language circulated by Tim Ryan, lobbyist for RISSA:

High Volume Or Multiple Requests For Access To Documents

In the event any request or series of requests for public documents under this statute to a single recipient is considered to be overly burdensome, that the recipient may request that the Attorney General intervene to form a reasonable compliance plan. 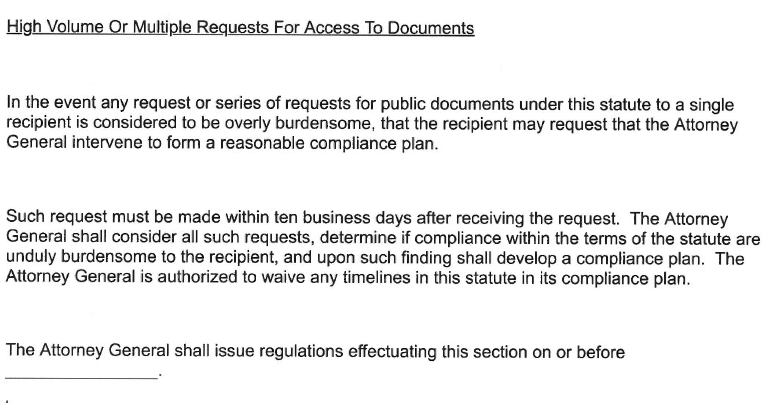 This would provide parents like Solas additional hoops to jump through, and the Attorney General’s office itself could be overwhelmed since school districts and other agencies could force the AG’s office to take the dispute under consideration. The AG’s office, through no bad faith of its own, could turn into the place were public records requests go to die.

Significantly, in internal communications, Ryan indicated to the Superintendents that the Rhode Island ACLU, through its local Director Steve Brown, was “open” to changing APRA. If that were true, and the ACLU was on board with the language proposed by the school superintendents, that would be a big deal, since RI ACLU has been a champion of the public records law, and has a handy guide for the public.

On Wednesday, June 2, at 1:37 p.m., Ryan emailed numerous superintendents and others about the legislative efforts (emphasis added):

I’ve been working hard on the APRA request from the Parents Defending Education Group:

• I’ve been in touch with Linda about tonight’s SK School Committee meeting and the media
• I spoke with Steve Brown of the ACLU and he’s open to amending the law to deal with excessive APRA requests
• I forwarded the conversation with the ACLU to the Speaker’s Office
• Tim Duffy and I are in touch with our union friends. 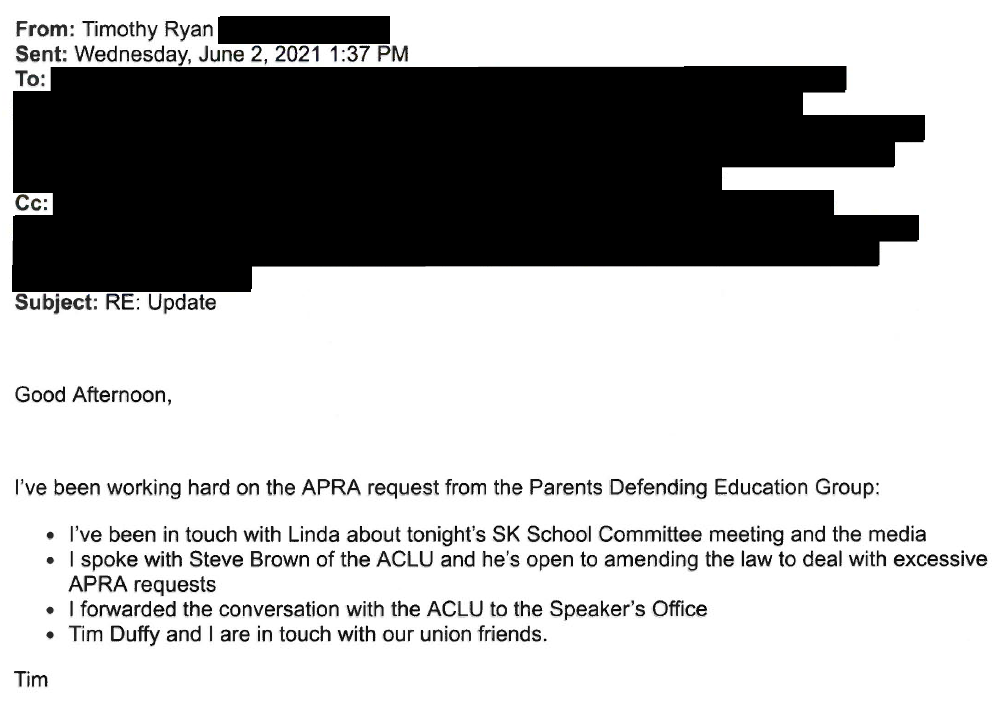 .
As of the time of the prior article, I had not heard back from the ACLU’s Brown on the issue. At about 7 p.m. tonight I did hear back from Brown, and it’s clear that the RI ACLU is “open” to a change only to the extent that it does not “unequivocally object” to amending the law. Additionally, while not mentioning RISSA, Brown indicated that the only proposal he’s seen, which seems to mirror the RISSA proposal, is not acceptable to RI ACLU (emphasis added):

In talking to a few people about this issue, I have indicated that we do not unequivocally object to an amendment to APRA, if appropriately defined and limited, that would address abusive requests under the law. However, we have expressed our opposition to the only version of an amendment I have seen, and we would not support a bill that simply gave the Attorney General blanket authority to make such a determination.

So the picture is not quite as rosy as RISSA presented, at least as to the RI ACLU. If the RI ACLU opposed whatever legislation emerges, that would carry a lot of weight.

But RISSA may know something we don’t about the prospects in the legislature. It’s clear from their internal communications that they have a direct connection to legislators and “union friends.”

I’ve been cautioned that with the legislature approaching the end of the term, there is a risk of the normal rules being waived and a bill rushed through without much public notice. So it’s not over until it’s over, and it’s not over.

Our power is in our vote. Unless voting machines are used.

There is nothing else to explain the election and re-election of some of the loons in office. Nothing.

Our power is in the second amendment…

There is no technical reason why all government documents subject to the FOIA are not on-line and available to all. The whole concept of making copies and charging for them is nothing more than a roadblock to accountable government.

Probably because it isn’t a list of principles nor curriculum item. It is a philosophy that is embedded in everything. The resistance is going to explode once this becomes to clear to parents and most everyone else.

And why isn’t there more resistance by the teachers themselves? What is wrong with them? Don’t any of them have children? Are they all just mindless robots? How can so many people be brainwashed into Marxism? All of those “nice” teachers (yours of course, not everyone else’s).

Most teachers are as concerned about their jobs as any other employee…they often do not to ‘buck the system’ and they hope the parents and the community will get involved with the school boards.

Amen and Ahwomen, brother. It would be so easy. Just take a couple of the innumerable administrative assistants who have nothing better to do; then have them scan everything into the inexhaustible supply of technology the board has purchased.

All requests and responses should be on a digital repository for all to see. So should a syllabus for each class and all class materials.

These school boards and those pushing them are going to have to come out from behind the curtain and face the music. What did they expect to happen when people start asking questions only to be met with a solid wall of “shut up!”? Does anyone believe these people will not resort to violence eventually?

Every single part of this New World Order is being rolled out without a discussion. The very core of this new religion is that white people are genetically racist and evil. Our world is being taken over and we already have no say in how it is going to work. “Just shut up you white supremacists!”

Just the fact that they are fighting so hard to be able to hide ostensibly public records from the public should cause everyone to wonder what it is they don’t want the public to know and why. This whole controversy could have been avoided if the school committee had simply fulfilled their responsibility and provided the records to Ms. Solas in the first place instead of trying to hide the records, placing obstacles in her way and smearing her and her motives.

Remember when schools and school boards were bemoaning the lack of parental involvement and interest in their kids’ education?

Think Plato’s Republic…”parental involvement” is to be limited to popping out the babies and then providing the funds for their being raised by the State. Just because you feed, clothe, and/or house them doesn’t mean they’re YOUR children, or that you have any say in how they’re to be “educated.”

Shut up, plebe – we are the “experts,” so we know better than you.

P.S. I really HATE the “Back to Top” button on the mobile site.

“It’s manufactured and then sort of- it seems to have been lit, the fire was lit,” the NBC anchor [Chuck Todd] insisted.

Chuck is sort of right .. it was manufactured outside of NBC, which is so systemic racist that it would have kept the parents of schoolchildren in the dark.

I wonder what Joy Reid has to say about this?