They don’t even hide their Marxism. They’re indoctrinating kids K-8th grade about the evils of the nuclear family. 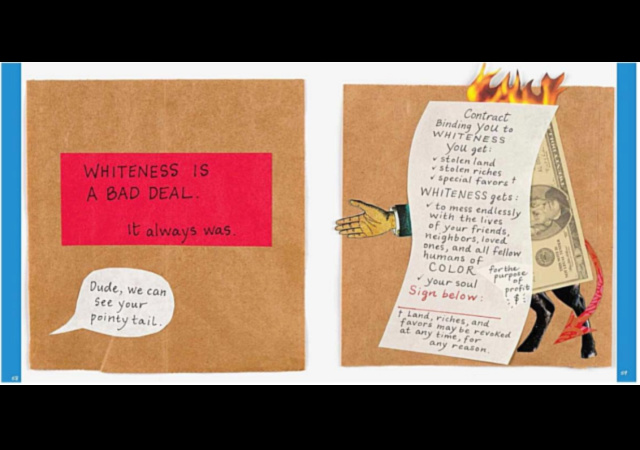 The teacher brought the lawsuit under the Equal Protection Clause of the 14th Amendment and Title VI of the Civil Rights Act of 1964.

The lawsuit mentions how people confuse equity and equality:

5. Equity is very different than equality, although the two are sometimes confused. Equality is the principle proclaimed in the Declaration of Independence, defended in the Civil War, and codified into law through the Fourteenth and Fifteenth Amendments to the Constitution, the Civil Rights Act of 1964, and the Voting Rights Act of 1965. As District 65 itself has recognized, equality is about sameness and treating everyone in an identical manner regardless of their race. Equity is about so-called justice and individuals getting what they “need and deserve.” Said another way, equality strives for equal opportunity while equity strives for equal outcomes.

6. In the name of equity, District 65 visibly proclaims that it “is committed to focusing on race as one of the first visible indicators of identity” in its Racial and Educational Equity Policy, featured prominently on its website.

The webpage includes a link to the “District 65 Equity Glossary.”

Superintendent Devon Horton already told teachers, “If you’re not antiracist, we can’t have you in front of our students.”

Deemer shows in the lawsuit how Horton defines antiracists with an image from a lesson for elementary students. 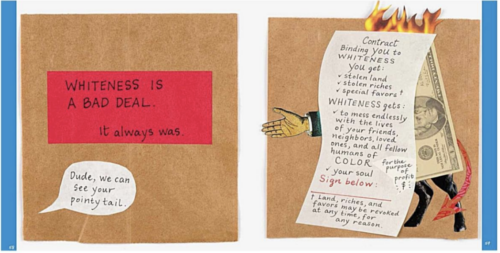 Apparently, District 65 has forced “antiracist training” on their teachers since 2017. So all of this pre-dates George Floyd’s death.

One portion of the lawsuit caught my eye: the destruction of the nuclear family.

The training tells kids K-8th grade: “It [is] important to disrupt the Western nuclear family dynamics as the best/proper way to have a family[.]”

Instead of a nuclear family, the lawsuit says the schools teach third, fourth, and fifth-grade students about “Intergenerational, Black Families and Black Villages.”

The part of the villages is long, but I had to include the whole thing. Destructing the nuclear family is a Marxist priority. From the lawsuit (emphasis mine):

146. In 2020, as part of its BLM Week Black Villages curriculum, District 65 included in a lesson plan for third through fifth grade students, “It [is] important to disrupt the Western nuclear family dynamics as the best/proper way to have a family[.]”

147. In 2021, as part of its Black Villages curriculum, District 65 included in a lesson plan for third grade students, “During our lesson on whiteness, we discussed how white culture shows up in the way that we think about family structures. There is a belief that a ‘normal’ family consists of a mom, dad, son, daughter, and pet. We’ve learned that this isn’t true.”

148. In 2021, as part of its Black Villages curriculum, District 65 set forth a guiding principle in a lesson plan for fourth grade students that included “Another way whiteness/white supremacy shows up in the United States is in the idea of the nuclear family. In the United States and other countries colonized by European countries, families that consist of a mom and dad and 2-3 children (maybe even a dog) are considered the proper or right way to have a family.”

149. In 2021, as part of its Black Villages curriculum, District 65 instructed fifth grade teachers to conduct a survey among students to determine whether each student is an “individualist” or “collectivist.”

151. District 65 also included as a teaching point, “The opposite of collectivism is individualism. Individualism celebrates independence and individual achievement.”

Why did I emphasize the last part? It is 100% pure communism, which does not exist in “many cultures.” You can take care of each other and help out without sacrificing your wants and needs.

The district used African proverbs to push the Marxism views:

154. The American sayings included, “Good things come to those who work hard”; “Pull yourself up by your bootstraps”; and “Worry about yourself.”

155. District 65 instructed teachers to explain that the idea of Black Villages and the lesson’s guiding principles “have to do with the idea of collectivism because they focus on how important it is for communities (villages, families, generations) to work together for the benefit of everybody, like the messages in these [African] proverbs.”

Just WOW. They do know that those proverbs could go along with the nuclear family, right? Let’s look at “It takes a village to raise a child.” I have no doubt a mother or father can raise a child on their own without any outside help. But let me tell you this right now. Having family around or good neighbors to lend a hand is a blessing for parents, especially new moms.

But once you destroy the so-called nuclear family (a term I still hate even though I’m no longer a socialist) you can easily instill your Marxist views. It is like feminists preaching choice, but bash us who choose to stay at home.

The district requires students to participate in those groups and walks as well.

The lawsuit accuses the district of indoctrinating K-8th grade students by telling them that treating everyone equally “is a colorblind message” and “color blindness helps racism.”

I guess District 65 doesn’t celebrate Martin Luther King, Jr. He is racist by their logic.

Deemer knew about and had to participate in the “segregated affinity groups among staff and students, Courageous Conversation trainings and practices, curriculum centering on whiteness, and District 65 policies and procedure devoted to so-called racial equity.”

Deemer expressed concerns when teachers had to read Johnny Saldana’s book Drama of Color. Her colleagues rolled their eyes, interrupted her, and chastised her intelligence.

“Plaintiff concluded that if she voiced her concerns further, she would be marginalized and face further humiliation from her colleagues,” states the lawsuit. “That was the one and only time Plaintiff spoke out to District 65 against the District’s materials or policies.”

I see what you’re doing. Alinsky rule #4 make your enemy like up to the rule book they wrote.

Communism will be fought in all 50 states.

Teachers better speak up or we lose another generation to Socialism or Marxism.

In “those” districts, the teachers spoke up years ago and were encouraged to retire. I have been pointing out this racial nonsense has been happening for a decade and it isn’t until the last year anybody seemed to care.

This is true. Most people seem to have only woken up to this recently, and imagine that it only just started.

Off target but WHY is FB stock soaring?

Is it growth in other Countries?

Someone is likely churning it.

They beat the rap for now

Any assumption change changes the value enormously, like the interest rate used to discount future money, future of competitors affecting those earnings, etc.

Then there’s the crowd, which believes that any movement comes from somebody knowing something that they don’t and want to get in or out before anyone knows what it is.

The trouble with critical race theory is that it’s a bad reading.

It’s also a motivated bad reading, which, if they noticed it, would give a better reading, and eventually one that’s completely normal. But they don’t notice it.

Knowing nothing about Illinois school districts, I am led to wonder what the racial makeup of the Evanston-Skokie school district is, given that this neo-racism has been in force there since 2017.

Yes. I don’t live there but I’ve been there and I know a lot of people who do live there. It’s a safe part of Greater Chicago, where crime is something that happens to other people, so liberals can indulge their feelings and signal their virtue without fear of personal consequences. Until their choices rise up and slap them in the face, good and hard.

I believe that explains what is wrong there.

They are –
>> Masters at Gas Lighting.
>> and Smoke-screening

You are correct of course.

LOL, what a load of horsesh*t. Not only is that stereotype not true of many white people, it IS true of many, many black women — as anyone who has been around loud and bossy black women can attest.

I hope Ms. Deemer wins her lawsuit and gets millions in damages. And I hope lots of other people follow her example and sue every idiot leftist in sight over this commie bullsh*t and the blatant brainwashing going on in our schools.

Does everyone now understand that Obama is a closet Marxist? And that the Democrat Party, which now controls the federal government, is Marxist to the core?

BTW, Lee Smith reports it’s the combat units in our military, the troops trained to fight and kill America’s enemies, that are being most thoroughly purged of ‘extremists’.

Note… Comrade Obama’s buddy Bill Ayers stated long ago he has a plan for the 25 million or so deplorables he thinks can never be ‘transformed’. It’s the same plan Lenin, Stalin, Mao, and Pol Pot had for those they considered beyond ‘transformation’.

Mmmm. A disfavored race is depicted as money-grubbing devils (complete with hooves and a pointed red tail). Where have I seen such depictions before?

Milhouse, can you help me out with this?

You’ve stumped me. I can’t think of any historical equivalents at all. Qre Fghrezre.

I find it amusing that this leftist mindless idiocy embraces African teachings held by people who were still living in mud huts while other countries were creating universities, industry and advancing science.

The third rail of political discussion is African culture and the possible drawbacks when it’s forced to grapple with the 21st-century and with progress in general.

Look at South Africa. White colonials dragged tribal sub-Saharan Africans into the 20th-century, imposing modern Western methods of social organization and agriculture on conflicting pastoral tribes whose way of life is completely antithetical to them.

Now that black South Africans are in the process of “liberating” themselves from the colonizers, they are descending into the worst sort of tribal corruption, including wholesale redistribution of land and violent retaliation against former white landowners.

Wait for the famine and the requests for foreign food aid to what was once a self-sufficient and prosperous part of the world.

I attended a mandatory in-service day about three years ago (in Western PA) that required teachers attend a session on antiracism (although I don’t recall the actual name). As soon as the speaker implied that all whites have privilege and racism, I stood up and walked out.