Colorado Mayor Ends Pledge of Allegiance at Board Meetings, But Trustees Still Recite It

Colorado Mayor Ends Pledge of Allegiance at Board Meetings, But Trustees Still Recite It

“Due to direct and indirect threats, inappropriate comments in and out of public meetings and general divisiveness and issues created in our community…” 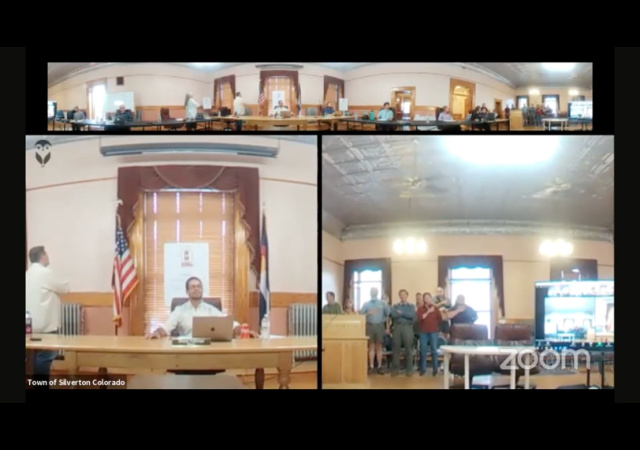 A mayor in a Colorado town suspended the Pledge of Allegiance at meetings because of “direct and indirect threats.”

Silverton Mayor Shane Fuhrman made the announcement at a town trustee meeting on Monday:

“Due to direct and indirect threats, inappropriate comments in and out of public meetings and general divisiveness and issues created in our community, we will not be reciting the Pledge of Allegiance during Town of Silverton trustee meetings,” Fuhrman said.

“We already discussed this as a board, and any other unilateral decisions we need to know about?” she asked the mayor.

“If you’d like to find somewhere in the code, something that doesn’t permit me to do this, then I welcome that discussion at our next meetings,” Fuhrman responded.

Barela then went on to tell the Mayor the decision was made without the board’s opinion.

“It’s been done for a long time. We all took an oath, and we as a board we decided it would be done,” Barela said.

But did threats of any kind cause Fuhrman to end the Pledge of Allegiance? Barela’s statement sounds like Fuhrman looked for an excuse:

“Back in April 2020 when the newest board members were seated the mayor brought it up that he didn’t want to do the Pledge of Allegiance anymore because it’s not really a thing, it was a 4/3 vote that we continue to do it. By going back to in person meetings it changes the dynamic compared to what was happening on zoom. While on zoom the three individuals who chose not to say the Pledge of Allegiance would just turn off their cameras now that we’ve gone back to in person meetings members of the general population especially those who are veterans have been questioning why would you run for office and take an oath to uphold the laws of the United States of America the state of Colorado and the town of Silverton if you won’t stand for the pledge. Members of the public have told them that they should be ashamed of themselves. I personally didn’t like his unilateral decision, when we as a collective group had already decided over a year ago to continue to do the pledge, I don’t know if it was premeditated to have it done on Flag Day, which we all know that was declared June 14, 1777 by the second continental Congress, now mayor Shane Fuhrman has made this first amendment right issue. To tell members of the public they are not allowed to say the Pledge of Allegiance during public comment and threaten to have them removed that it was a one strike in you’re out policy violates every single one of their first amendment rights.”

Geez, Silverton? I have been there and it’s a little historic town, Jesus what have we let in our Country?

Isn’t that the one at the end of that coal-fired tourist train on the Animas River?

Half the town must be on the council.

Yes it is catch it in Durango!

I had fun sitting in the bar Louis L’amour supposedly wrote a few books in. Wanted a good rye. Settled for a mediocre one.

The article indicates that there are 3 people who have a problem with the Pledge of Allegiance. Seriously? The Mayor thinks 3 people’s opinion are more important that the whole town ? This Mayor has to go.

And I say to those three malcontents, if you hate the country so much – move.

No one keeps you here.

It is established case law from W. Va. v. Barnett https://www.thefire.org/first-amendment-library/decision/west-virginia-state-board-of-education-et-al-v-barnette-et-al/ that compelled speech is unconstitutional. If those 3 folks decided not to recite the pledge, well, I guess that might be within their rights. Perhaps they are Jehovah’s Witnesses, though I doubt it. To prevent others from the exercise of their exercise of free speech to recite the pledge is another matter.

Not three people in the town. Three people on the board. Out of seven, so 42%. That’s not insignificant, but it’s still a minority.

The reason for the Pledge of Allegiance is to remind those present that they have responsibility to the rest of the community. They are gathered for the purpose of promoting the general welfare, and it is easy to forget this if recent discussions have been difficult, most especially if problematic members disrespect their colleagues or constituents..

The same rationale applies to prayer, and it sounds like this mayor is in dire need of both guidance and a sense of comity. Maybe the rest of the council should also add a prayer for wisdom.

Please forgive my picking a nit, but we “say” the Pledge, not “do” it.
A few years ago, I had a homeroom student who wanted to kneel during the Pledge. I told him he could wait in the hall. He argued that he had a right to kneel. I agreed, but I told him he didn’t have the right to make me and the rest of the class look at him.

Good for you!
How soon before you were fired?

I”d say the pledge is neither declarative nor performative. It’s there as a test, whether will you tolerate the ceremony or not. It’s socially coercive, and the test is whether you’ll submit.

One nit to another – Don’t we actually ‘recite’ the Pledge of Allegiance?

I find it an imposition, probably not for the same reason as the mayor. The pledge doesn’t even scan as poetry since they added “under God.”

Its function is to get the crowd to stop milling around and pay attention, like national anthems at ballgames and bible reading (once) at the start of school.

I’d like to see some critical race theory assumptions added to the pledge, though, just to see the effect on the easy-grace patriots. There’s probably a “what is this crap?” limit to be probed.

The Pledge of Allegiance is most definitely declarative, is not an “imposition” nor a mechanism to get a crowd to settle down. It is a mutual declaration of a promise to one another to be supportive and to hold ourselves accountable to our best and highest ideals.

That would be performative.

Depends on which definition of “performative” you mean. Based on your prior utterances, I’d guess that you mean the “wrong” one, as in “reciting for show”, rather than reciting as an affirmation of allegiance. I was still in school when the phrase “under God” was added. You’d be shocked at how non-controversial it was. We also recited a “non-denominational” prayer. Since we all understood that we lived in a Christian nation (and virtually all of us attended church with our families on Sunday), that didn’t bother anybody, either. Now, of course, there would be mass hysteria and unending litigation.

Austin invented performatives as a way to rescue morality from logicians, showing that there were more functions for language than declaratives. They’re acts performed through language. Like ‘I do” in a marriage ceremony. There are also infelicitous conditions that cancel them, like ‘I do’ in a play with a marriage ceremony. Or being coerced into saying the pledge, which is more or less the situation for everybody.

In the latter case it’s neither performative nor declarative.

I don’t know about you. I was never coerced into anything of the kind.

The 3 commie scum who don’t want to hear the pledge have a quick remedy. With a screwdriver and 10 seconds, they will never hear it again.

Outrageous, but not seeing anywhere in either the LI article nor the linked article indicating anyone continued to say the pledge?

Run the Mayor out of town on a rail…

Mayor Fuhrman really puts the smarm into smarmy, doesn’t he.