“Vaccines and natural immunity are [at] all-time highs and we have data now that we haven’t had since last year. And so we really need to live based on the policies of now, summer 2021, and not fall of 2020.” 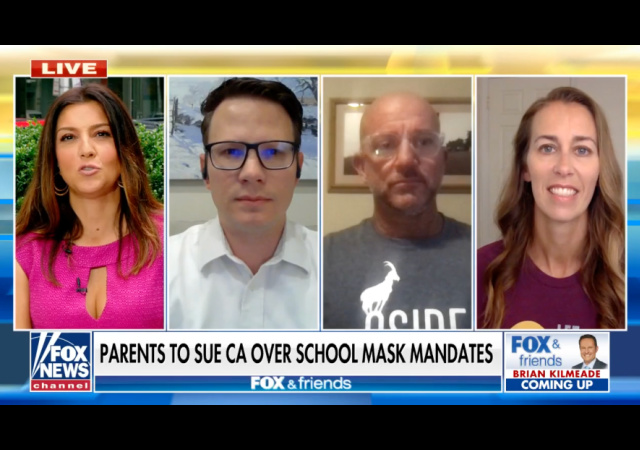 God bless Leslie for having the ability to stay in California. I am never leaving Oklahoma.

California does not want to stop controlling a person’s life. It’s like they do not want the COVID-19 outbreak to end.

The public schools will reopen for the 2021-2022 academic year with outdated guidelines. Those guidelines include masks, mandated quarantines, asymptomatic testing.

You know, the same guidelines schools that opened in the 2020-2021 academic year and proceeded without many incidents. (I might have some personal experience with that.)

A lot of California parents are ticked that the government is still dragging down their children. Northern California group Let Them Breathe wants to sue the government to stop them from implementing the guidelines.

Southern California group Reopen the Schools, which successfully sued the state to reopen the schools, joined forces with Let Them Breathe.

The parents explained their purpose and approach on Sunday’s Fox & Friends:

“As parents, we’re seeing our kids suffering behind the masks and that’s why we can’t wait any longer to restore their smiles,” Sharon McKeeman, a mother of four who founded the group, said. “Let Them Breathe,” which, according to its website, promotes mask choice and an end to mask mandates.

She noted that the group has received the support from “thousands of parents that are advocating to state and local representatives.”

“We’re making resources readily available for parents,” she explained, adding that “we’ve had huge marches statewide, however, unfortunately we’ve seen that California is very slow to follow the science and do what is best for our children unless a judge makes them.”

Jay Reed, a parent of two, pointed to the state constitution, arguing on Sunday that there are “diabolical opposing forces” as it pertains to quarantines.

He told “Fox & Friends Weekend” on Sunday that “there’s a lot of conflicting policies that happen.”

He explained that “You have [the] California Department of Public Health on one side and you have the state constitution on the other.”

“The state constitution requires that school districts provide in-person education to the greatest extent possible and then you have the public policy from California Department of Public Health that says if you come within close contact of someone that tested positive for COVID, you’re sent home and there’s no due process for that student, meaning that you can’t get a negative COVID test, you can’t provide an antibody test and as we saw in May when 15-year-old kids were allowed to get a vaccine, in some cases vaccines couldn’t get you back into school,” Reed went on to say. “So you’re sent home for 14 days, you can’t get back to school and if you imagine like a middle or a high schooler where you’re going from class to class, the proximity increases.”

Reed then said, “So one positive test could result in the quarantine of dozens of healthy kids and so that policy and the masking policy, they’re all just at odds with one another.”

Jonathan Zachreson, the founder of Reopen the Schools, described Gov. Gavin Newsom as a “fake governor who has not listened to the science.” Newsom and the government forced the parents to take action.

Zachreson said: “Vaccines and natural immunity are [at] all-time highs and we have data now that we haven’t had since last year. And so we really need to live based on the policies of now, summer 2021, and not fall of 2020.”

Zachreson’s comments echoed those from University of California-San Francisco Infectious Disease Expert Monica Gandhi. She wants “to remove some COVID-19 restrictions for students.” She cannot believe we’re having 2020 conversations after the progress we have made:

She points to data from Israel and the UK which shows vaccinating adults reduces transmission among unvaccinated kids – along with data from Utah, Denmark and Norway which indicates little difference in transmission between unmasked and masked children.

“Which actually speaks to the fact that children are less likely to transmit, and also get, COVID-19,” Dr. Gandhi said.

Instead, Gandhi worries about students falling behind and their mental health. She would tell the California Department of Health that their guidelines do not match the science.

I hope these groups are ready for the inevitable charges of “white supremacy”.

I will not get to that. Conservatives do not have the right of redress in court. Likely it will be found they lack standing and case dismissed, because…. well, does it really matter?

I’m thankful The Bride and I don’t live in any of the enlightened, superior states outside the Old South, especially on the Left Coast.
.

Dont you have to have the support of the science to dispense with the mask?

oops – I may have that backwards