“I’m not confident I’m not going to change his behavior. What the hell? What do you do all the time?” 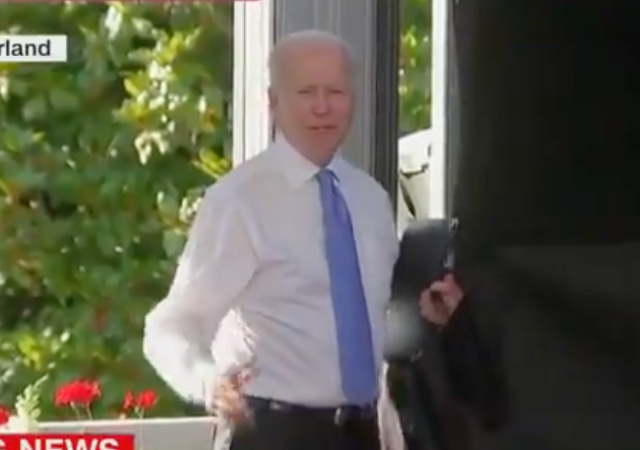 Holy moly. If former President Donald Trump did this the media would have had a meltdown. They’d comfort CNN’s Kaitlan Collins while calling for Trump’s head.

Collins asked Biden why he is confident Russian President Vladimir Putin will change his behavior.

Biden literally flew off the handle:

Collins then asked how Biden’s meeting with Putin could be described as constructive since Putin denied the cyberattacks, denied any human rights abuses in Russia, and refused to say Alexei Navalny’s name.

Biden answered:”If you don’t understand that, you’re in the wrong business.”

WOW. Good for Collins for asking those two questions after watching her colleagues melt and gush over Biden’s supposed tough body language towards Putin.

President Biden snaps at CNN's @kaitlancollins who asks why he's "confident" Putin will change his behavior:

"I'm not confident I'm going to change his behavior. What the hell? What do you do all the time?… If you don't understand that, you're in the wrong business." pic.twitter.com/LSX0QY2AF1

I approve of Biden’s policy of attempting Diplomacy with Russia and improving the relationship with Russia which bottomed out during the Trump administration as a reaction to a Russia hoax and resulted in countless irresponsible acts on our part.

I would like a good enough relationship with Russia that perhaps we could detach them from China. This has added benefits that we don’t have to spend our political capital with European powers trying to shoe-horn them into an anti-Russia crusade that has no purpose.

I don’t disapprove of better relations with anyone, provided it doesn’t cost us. I can tell you this, Dementia Joe the communist pedophile is not the man that will accomplish it.

I’m quite sure Putin had a trained psychiatrist in the room with him to analyze Joe Biden and make an assessment of his mental health. They now know more about Biden and his fitness for office than we do.

He didn’t need a trained psychiatrist. He was a highly effective KGB officer plus they probably have analyzed every scrap of information that exists about Biden and his corrupt family, so he knows at least as much as a psychiatrist about Dementia Joe. Plus, it doesn’t take a psychiatrist to figure out what’s wrong with Joe. Plus, anyone who’s had a family member with senile dementia can recognize the symptoms.

I think the whole world knows by now that Biden has dementia. But having spent several hours in a room full of Russian operatives Russia now knows the extent and severity of it plus secret filming that will be analyzed in depth later. The bottom line is the Russians now have a treasure trove of intelligence material on Biden and he is none the wiser.

“Bottomed out,” you mean by the Dems creating and accusing Trump for 5 years of nefarious conduct with Putin and Russia.

Diplomacy works from a position of strength, something that #dementiajoe and his fellow demoRATS are ignorant of

The Russians knew they had to fear Reagan when he fired the air traffic controllers.

Reagan did not make threats, he made promises.

Diplomacy is saying “nice doggie” until one can find a bigger rock. Putting Biden in a room with Putin is elder abuse and Putin has been more than kind to not totally destroy Slow Joe. When Putin called the fall of the Soviet Union in the 20th century a tragedy, he is watching the USA do the same thing in the 21st century,

I will thumbs up the idea, though I don’t think Biden has a policy on anything.

It would be great to have a real alliance with Russia that could stabilize the whole world. I don’t think it will happen, though.

Other policy’s of which “Danny” approves:

You really don’t pay attention to world events, do you? Biden is part of the “Russia Hoax” and Putin knows it. He’s not going to give Biden an inch.

How much do you think Biden is demanding in bribes from the Russians?

So the demented pedophile is lashing out at his most ardent supporters. Yeah, that’s about right for a dementia patient.

Noe having ever watched CNN outside of as a captive airport passenger, I don’t know Collins. A photo would have been helpful to determine whether or not she was dog-faced. I’m currently making a list of known pony soldiers, so we’ll know when we finally have enough of them to attempt an insurrection.

We know Biden is just prop. Literally. But he has 40+ years of carrying himself, despite his filthy corruption, treason and perversion.

We know Kamala Harris – aside from all the disgusting details of her personal and career life – is MERELY a poser. She is an empty pants suit. Now she’s completely exposed for what she is and isn’t.

Whatever leftist puppetmaster who put Harris where she is will rue the day. As with Obama, they got too greedy, and Obama exposing himself gave us Donald J. Trump.

This guy is getting the softball of all softballs on his glowing coverage of “body language”.

Also, did I just see him raise a finger in defiance to a woman’s question? Where’s the outcry from the fem parade? I mean how dare he!

Adding the departing statement, “You don’t understand……”
The only person who truly doesn’t understand is the person pointing and shaking his finger at the reporter in an admonishment. It’s the reporter who understood exactly what everyone else perceived of his statements or more to point his non-statements. Fence sitter as he is.

The only people within the leftist propaganda camps doing any real reporting right now are the ambitious low level wannabes that have no clout or air time.

All of the rest of them that are the usual arrogant POS faces you see day in and day out are content to sit on their duff and rake in the money for mediocre ratings and serve the purpose of the progressive state.

I don’t really hold much regard for their underlings though because they were likely hired by the same progressive overlords as the plastic faces on tv. The underlings are probably just trying to get some traction for a better gig, so they can do the exact same thing in plastic land. Either that or they are just throwing out their anti-propaganda questions to allow the big news troll execs to make a token claim of unbiased reporting that will convince no one paying attention.

You’d think the people who have been going on and on about bullying women would have been all over that. Nope.

He will keep punching and punching away at this problem…

Decaffeinated Joe is back on the bean.

Probably. This likely the most work on consecutive days he has done so far in his term.

What are the countless irresposible acts? What serms irresponsible to me is making us enery dependent.

“Grampa has had enough of your lip, little princess!”

Is he shaking his fist at cloud formations yet?

Getting them off-script as much as possible is a good thing. The last thing any of them, especially a BLM advocate, wants to do is explain what it really is.

Senile old dipstick missed his warm milk, cookies and a nap–and took it out on a female reporter.

“I’m not confident I’m not going to change his behavior.”

Pardon me, but this is a double negative. English translation: “I’m confident I’m going to change his behavior.”

But then, with this [p]resident, you just don’t know.

In case an editor is paying attention,

notice you cannot provide and up/down vote to navyvet’s comment because of the quote.

It’s been like this since the “big change” and has never been fixed. Just an FYI.

Had I known that, I would not have applied the “blockquote”. Lesson learned.

Whenever I start a comment with a blockquote, I just drop a period ahead of it

An interesting tip. Thank you.

Joe has all the personality of a last year’s birdnest, with much more fossilized crap on it. What a buffoon.

Biden fucked up by not bring Putin a Ice Cream Cone

Did Putin accept his push-up challenge?