“They actually — well, look, I mean, he has made clear that — the answer is, I believe he has in the past essentially acknowledged that he was — there were certain things that he would do or did do.” 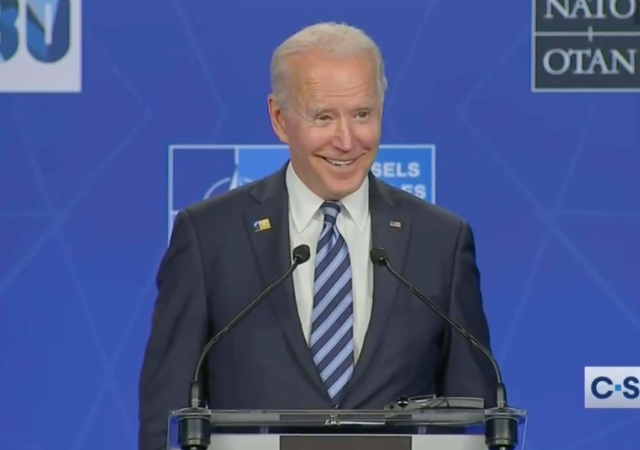 Ah, yes. We have another example of why President Joe Biden does not have news conferences.

Biden responded: “(chuckles) May I answer the first question? I’m laughing, too. They actually — well, look, I mean, he has made clear that — the answer is, I believe he has in the past essentially acknowledged that he was — there were certain things that he would do or did do. But look, when I was asked that question on air, I answered it honestly, but it’s not much of a — I don’t think it matters a whole lot in terms of this next meeting we’re about to have.”

What. The. Heck. Did his earpiece give out and he couldn’t hear his handler’s answer?

Biden and Putin will meet on Wednesday.

Biden made the “killer” remark in March:

In an interview with ABC that aired Wednesday, Biden said Putin “will pay a price” for his efforts to undermine the 2020 US election following a landmark American intelligence assessment that found the Russian government meddled in the 2020 election with the aim of “denigrating” Biden’s candidacy.

When interviewer George Stephanopoulos asked Biden if he thought Putin was “a killer,” the President said, “Mhmm. I do.”

Putin paid a price? You mean he gets his pipeline? Surely global warming will strike Putin down.

No, he means Putin paid the Big Guy his normal cut.

What does Putin have on Joe Biden?? (sarc)

Big Guy scared of his boss…

Meaning Red China. Meaning the Ukraine. Meaning just about everyone.

Biden being compromised for extortion rivals even Hillary Clinton.

Biden isn’t running anything anyway. His wreck of a wife is interfacing with and Susan Rice, Anita Dunn – the real people running Junta America.

The thing with an earpiece is possible.. If it is for real, why wouldn’t some other technical people bring in a jamming device, just for fun?

Maybe something like that did happen. It was that or brain flatulence.

I’m sure they use a spread spectrum earpiece to minimize jamming.
Hedy Lamarr comes through for Hedley Lamarr.
No, wait… Dr. Jill is Hedley Lamarr… Joe is President Lepetomane.
It’s king to be the good.

One of the buds he inserted in the wrong orifice. All the better to hear himself, my dears.

The Dems rig the election and this is the best they have!?!

Slow Joe and his Bimbo in Waiting are embarrassing!

This compromised dimwit and the hopelessly talentless whore in the wings are the best things that ever happened to America’s greatest enemy: the fascist democrat party.